Life As I Am Living It

I've given up on the whole tech thing for today. Perhaps my brother can help me. He's very, very knowledgeable about the ways of the Mac and is also an AOL user so he would be the logical choice. He's just so very busy. I hate asking for some of his precious time when he has a very demanding full time job, two children, a wife, a home.

I haven't spent my entire day dealing with the computer. I took a good walk in the beautiful weather, then working outside some, cleaning the henhouse nests, picking up some fallen branches. There is so much to be done in the yard and in a way, that makes me happy because I do so love to be out in it. And the potatoes and peas need to be put into the ground and maybe we'll get to that this weekend.

Tonight I'm making some stuffed peppers. I haven't made stuffed peppers in forever and I'm thinking about when I was a vegetarian and missed the stuffing you put in turkeys so much that I'd make that stuffing and put it in peppers and bake it and it was good. But tonight, I've got brown rice and lentils that I cooked slowly, slowly this afternoon on a simmer mat and ground venison and mushrooms and tomatoes and onions and garlic to go in the pretty red and yellow and orange peppers.
I don't know why I haven't thought of making them lately. At Costco I can get gorgeous peppers for not so much money and it's a good thing to make and to eat.

Besides the stuffing-stuffed peppers, I am also thinking about the restaurant I've talked about before where I used to eat when I was a student at University of Denver.
The Lost Days, as we may call that time.
But the restaurant- it was so fine. My first exposure to vegetarian cooking. Hanuman's Conscious Cookery, and the menu was always handwritten (of course) and besides the regular offerings, there would always be a daily special "according to the cook's consciousness."

I have one of my very oldest and dearest friends coming to spend the night on Saturday and I want to make him something delicious and special. My consciousness tells me that I want to make him something from the garden and from the woods. I am not sure what that will be yet. I asked him what he wanted to eat and he said anything, except for perhaps the Rotel dip and I chided him, telling him that the Rotel dip is freaking awesome.
But I probably won't make that. He is something of a gourmand although I remember so many years ago when he gave me a cookbook and inscribed it to me as "the best maker of a peanut butter and honey and raisin sandwich on earth."

I still feel very unanchored, floundering and foundering, as it were, in the deep, great sea of life. But I am moving forward, or at least I am moving.

And surprisingly, listening to Burt Reynolds read his memoir, "But Enough About Me" is incredibly soothing and peaceful and comforting. 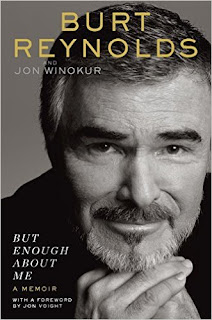 He knew and was friends with everyone from Betty Davis to Roy Rogers and speaks of them so lovingly. He talks about the filming of "Deliverance" and about falling in love with Dinah Shore. His voice, as I have said, is very weak and at times, hesitant. You can hear the shuffling of pages in the background as Burt reads and I am sure that in a production with a stronger-voiced narrator, those sounds could be edited out, but here they are heard and it only adds to the integrity of it all somehow. And at the beginning of new tracks, you can hear him, rested and in fuller voice and then, as the chapter progresses, you can hear him tire, the voice growing weaker, the words harder to come out.

I know that feeling. And I love and respect him for sitting down with a real writer and getting these stories set down on paper and then, sitting down in front of a microphone and reading what has been written about his life.

As I age, so many different things catch and keep me, inspire and sustain me.

The cook's consciousness. The woman's and mother's and grandmother's and wife's awareness.

My husband is hungry. I need to go feed him.