And Yet Again- LUNCH! 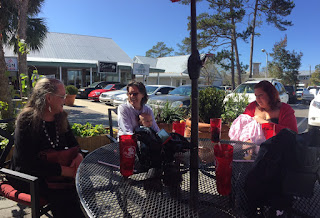 Oh my goodness. What a day! And it was so fun.
We did actually go to a mall. Although May has found her wedding dress (and it is a glory), Jessie and Lily have yet to find their bridesmaid's dresses and of course, I haven't found a mother-of-the-bride dress. So, off to the mall we went.
We had no luck whatsoever but we had fun. Big fun.
I kept pointing at totally inappropriate garments and saying, "Mother of the bride?"
They groaned and made rude comments and when I pointed to a pink faux-suede number with fringe and asked, "Mother of the bride?" Lily said, "If your daughter is Pocahontas!"
Heh-heh. I totally set her up for that one.

After the mall we went to the restaurant on the north side of town where May is working as a server. The restaurant she was managing is closed for restoration.
Not repairs- restoration. That cafe was in an old historical building and it had to be done.
Anyway, we met our darling Liz Sparks there who had not yet met Maggie and it was another glorious baby-passing lunch. The temperature had risen dramatically from the twenty-something it was when I got up to the seventies by lunch time.
Oh, North Florida!
So we got to eat outside. Salads and delicious pizza and the babies got mama-milk. Which made them happy. 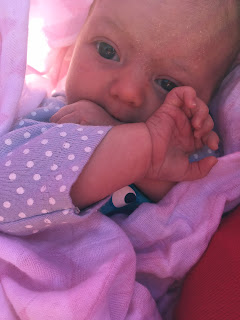 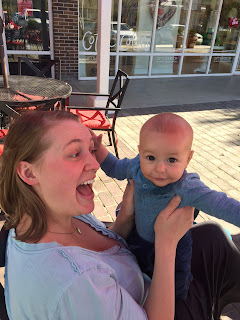 August is showing more and more interest in what his mother is eating and in a few months, he'll be trying new foods. No teeth yet for that boy but they will start poking through soon. He has discovered his tongue lately and cannot keep it in his mouth. 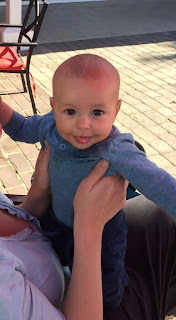 Now the truly funny thing about this is that JESSIE DID THE SAME THING WHEN SHE WAS A BABY! I called her my lizard baby and it got to the point where I was a bit concerned. She has an extremely long tongue but she has learned to keep it mostly in her mouth.
Who knew that sticking one's tongue out was a genetically controlled behavior? It all is. I swear to god. But August looks so damn cute with his tongue stuck out that we just laugh which makes him laugh. He is such a jolly baby.
And Magnolia is learning to smile and she seems most likely to do this when her diaper is changed. The little woman-baby loves to feel the air on her tushy.

So that was a lovely time and then we went to a baby-consignment shop and I bought the littles a few outfits, including a pair of overalls for August. Dude needed some overalls.
And THEN we went to the nursery for trees to plant over placentas, by which time we were all exhausted and my feet hurt from my boots which has never happened and we walked around for a bit and realized that to buy trees, we might actually need a vehicle bigger than my Prius although Jessie did buy a small Gingko tree. And I got some purple seed potatoes and some Thai basil seeds and some cilantro seeds. Jessie also bought some seeds and kept saying, "I just feel like I need to plant things!" and Lily kept saying, "I just don't feel that at all," but I told her that the planting gene would indeed kick in eventually.
I could be wrong about that. She may not have it at all, and if that's true, well, then she can get vegetables from those of us who do.

And that was our day and now the sopa de lima is simmering and I need to crisp up some tortilla strips to put in the soup and honestly, I couldn't be happier.

A very happy day and once again, I am so grateful that my children live nearby and that I can be a part of their lives, of their children's lives.
When I dropped Lily and Magnolia off at home, I kissed and hugged the boys and told them I loved them and they told me they loved me too although they were a bit distracted by some new toys.

And hell- we have an entire MONTH to buy dresses for the wedding.
It will happen.
We might have to go shopping again.
Darn it.