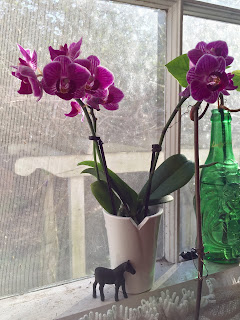 Today has been a day for finding things. I seemed to need to just keep moving and so I did and pulled that drawer out from under the stove and used the flashlight to find what was stashed between the stove and the cabinet and mostly what I found was two forks, two simmer mats, an ancient "Perpetual Plum" lipstick without the top, a bunch of seashells, a few magnets, one of Frida, one of the Virgin of Guadalupe, and enough dust to fill a bushel.
I am thinking that two little boys I know might have discovered the fun of sticking things down that crack and into the hidey-hole provided under the cabinet when they were younger. We also found a fan remote control the other day (who needs a fucking fan remote control?) that Gibson used to use as a pretend cell phone and just the sight of it brought back memories of that little boy, walking around with the remote up to his ear saying, "Hello! Hello!"
So all of that is good and I now have more simmer mats than any one person needs and the fork inventory is back up to five. I tenderly cleaned up Frida and the Virgin, soaking them in some soapy water and then washing their faces.

While he worked in the garden, Mr. Moon found that tiny toy horse in the picture above and it always surprises me when we find something in the garden. You'd think by now we would have handled every square inch of dirt and everything it held in there. The horse is missing a tail and must be pretty old because his belly is stamped "Japan" and not "China." I put him on my dirty window sill next to a blooming orchid I bought myself last week.
Still life with Japanese horse and orchid, late-afternoon sunlight shining through.

I made the chocolate truffles and did a little weeding myself, did laundry, ironed some shirts. My husband keeps saying, "What can I do for you?" and I just smile and thank him and tell him I love him.

So it's been a quiet day and I got this picture from Lily. 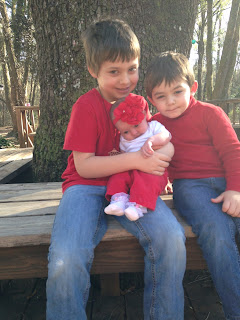 My big boys, holding their little sister, their Valentine's picture. Owen being so careful with Magnolia, Gibson such a little man boy, that turtle neck, those eyebrows, that hand on his thigh. Magnolia our newest baby, our sweet little girl in her giant headband flower and matching red pants. We are starting to wonder if she is going to have blue eyes which would be incredibly amazing. Jason and Lily both have brown eyes, as does her other grandma and her Boppy.
I would like that, of course, my own blue-eyed DNA passed down to her. But it doesn't really matter. She is going to have beautiful eyes, no matter their color.

Jessie sent me this, speaking of beautiful eyes. 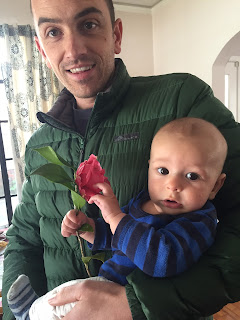 Her good-looking fellas picked her a camellia.

And here's a picture of what the garden looks like this evening with the sprinkler on it. 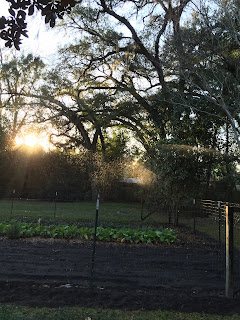 It is tilled and weeded and ready to receive the potatoes and peas and Mr. Moon even planted one last row of arugula and mustards before winter ends, to hopefully get a few more weeks of that goodness.

Rusty is still up in the tree and Lily has posted on Facebook, asking if anyone has a sixty-foot ladder or for other suggestions. The bin with the tuna in it is still there, and frankly, they can't afford the hundreds of dollars it would require for a tree trimmer to come and rescue him and I'm afraid the cat is so freaked out that he might actually jump if someone approached him like that. He's known me his entire life and still has only once let me pet him.
So that saga continues.

And it has been a good day, despite the panic in my belly and I have been listening to another book by James Lee Burke, read by Will Patton and my favorite line so far is this one: "Her smile reminded me of when someone opens a music box."

Keep moving, don't fight it, stay open to all of the possibilities of beauty and of love.

Open the music box, turn the little key at the bottom and let the tinkling notes fill your heart.