The Age Of Miracles

I met May and Michael in Railroad Square which is a trendy area in Tallahassee which I never go to being beyond trendy myself, of course and so trendy in fact that no other trendiness can compare.
Uh-huh.
We went to a wonderful vintage place but the wonder was somewhat diminished by the lack of AC. There were fans everywhere but it is hot. And for some reason, I just am not dealing well with heat right now. But we had a good time and I bought a beautiful old mixing bowl and an ancient Fanny Farmer cookbook, circa 1936, and May got me a Catholic children's booklet entitled, "Mary My Mother," which cracks me up. 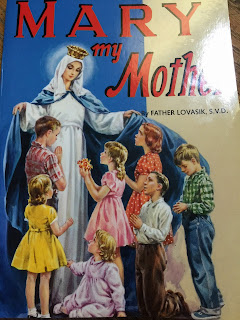 And in reading a bit of it, I am extremely grateful that I was not raised Catholic. I was born with enough guilt. Add in the amount the Church tries to shovel in on children and I would have become a nun who spent her life displaying stigmata, weeping tears of blood and whipping herself with a cat-o-nine-tails. 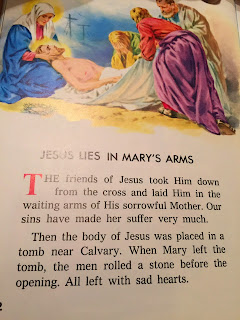 OUR SINS HAVE MADE HER SUFFER VERY MUCH!
Well, if that isn't the essence of the joyful word of God, I don't even know what is.
Are they still trying to make little children believe this horseshit?

But it is true- Mary is May's mother and that's a fact, Jack. May gave me a card and in it she wrote such beautiful things that I can't even begin to process them. For her birthday. Her's.

I am so lucky in all ways but in the ways of family and love, I, like that other Mary, am Queen.

And so it's been a very nice day and an especially interesting one in the poultry department. I saw something this morning that I have never seen before in my life.
Mick tried to fuck the duck.
He did his little dance around her and got all fluffed up and tried to make a move on her and she looked at him like, "Who do you think you are?!" and he stopped in his tracks, his eyes still glazed over, but he backed off.
I swear to you, this happened.
Also, I believe that every hen AND the duck gave me an egg today. Eleven possible laying birds and eleven eggs. Even old Trixie and Mabel! Full-sized, even if a bit misshapen. 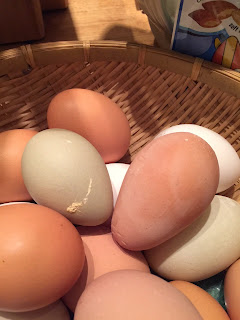 The two in the center, there. Bless their old hearts.

And so this day has gone. The celebration of miracles, large and small. Mr. Moon has changed out the leaky faucet in the kitchen. We ate pancakes. We will eat some more of that delicious soup I made on Friday for our supper tonight. We split the first cherry tomato from the garden this morning- more flavor in that one little golden orb bite than in an entire store-bought tomato. My dreams have started trying to resolve themselves in small ways. I still dream of the houses and chaos but I am beginning to make progress in sorting, in tidying, in making things work, in finding beautiful things among the dross, rather than just complete trash. I find this interesting. And who knows what tonight will bring? 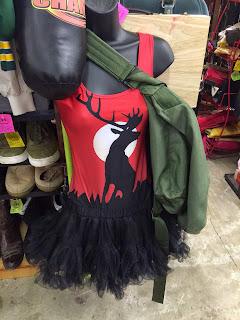 Although I am sure that Mr. Moon would love me in that, I did not buy it. I can't imagine why.
What gal wouldn't look fab in a nylon tank top imprinted with a buck posed before a full moon on it, sewed to a black net tutu bottom?

The world is a wild and wondrous place my friends.
Mr. Moon just informed me that FSU's baseball team won the ACLU or something. No, that's not correct. Well, it was important. I gave him a high five. That's the appropriate thing to do in that situation, right?

And now I'm going to go make him a peach cobbler.

I have a recipe. 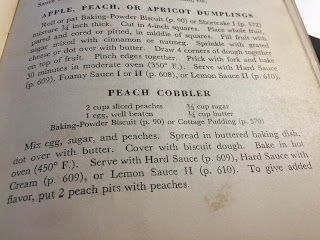