If hot yoga is good for you, then I just spent the healthiest hour of my life.
Fuck, it's hot out there. Not as hot as it's going to get. I know this because I haven't felt like vomiting on the last half mile yet.
Yeah, I know. There are women my age out there running marathons.
I am not one of them.

Another funny thing that got said yesterday was by Lily. We were sitting in the shade watching the boys in the pool before she left for work. I took my hair down and said, "Well, it's the time of the year when my hair is wet all day long from my walk. I really am thinking about cutting it."
"Why don't you?" she asked.
"Oh hell. I don't know. At my age it's my one glory. Who would I be without my hair?"
"A woman who didn't have wet moldy hair all day."

My children are so mean to me. I swear.

So. I have no news today. Unless you count an article I read in the local paper yesterday which stated that Tallahassee, Florida is fourth in the nation in body-waxing. I'm not sure how they determined this but I suppose it's possible. I've never gotten any part of my own personal body waxed so I can't really comment on that.
And in today's newspaper there was an article about a new restaurant opening up in Tallahassee which is interesting to me on several levels. One is that the building has been standing empty for years and it's a huge and beautiful log cabin structure. I had heard rumors that a restaurant owner from Thomasville, Georgia had bought the building a long while back but nothing ever seemed to happen. It remained in good repair but...closed.
Suddenly, it's about to open its doors to business and it turns out that the owner IS the Thomasville woman. She's 81 years old and her restaurant up in Thomasville is a country buffet and famous around these parts for the awesomeness of its vegetables and beans and meat and cinnamon rolls and casseroles and all sorts of country/soul goodness. The restaurant up in Thomasville is pretty barebones when it comes to ambience and so forth but it's always busy as hell and I've never once left there not feeling at least slightly guilty and incredibly full. There was always a sort of Christian theme about it and every time we ever went there, the old woman who sat at the entrance to take your money always asked Mr. Moon how tall he was and then always asked me, "Where are yew FROM?" if I opened my mouth.
Always an adventure.
Anyway, it turns out that this woman has spent the last however many years completely replacing everything in that log cabin restaurant and has spent at least two million dollars on it and refused to open until she could get a liquor license, much to the chagrin and disappointment of her son who must be the Christian in the group. So now she's got her liquor license, a few new chefs, some of her old chefs, and she is ready to open the doors. They're even going to have a seafood bar and according to the paper, that fish will be swimming in the morning and hot and ready for you to eat that night.
Fuckingfantastic if you ask me. 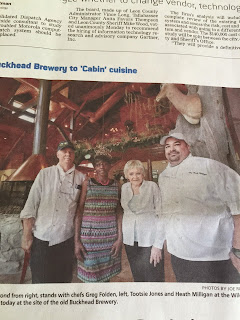 It's not going to be a big hit with vegetarians. I feel certain that even the cinnamon rolls have lard in them and each serving of greens has at least a few bites of pork in them. Also- plenty of dead animal heads on the walls and so of course, I'll feel right at home.

Well, I wish them luck and I have to say that any 81-year old woman who has the chutzpah to put forth that sort of money and energy to open a new business has to be admired.
I bet you anything that if we visit, she'll be sitting at the entrance, taking your money. She'll ask my husband how tall he is and then she'll ask me where I'm from. Also, I'm proud of her for bucking her son who, since they bought the building in 2004, has tried to talk her out of opening it. He's her son AND her business partner AND an accountant.
But she is the mama.
And I wish her success.
Bless her heart and I mean that in the most sincere and loving way possible.

I think I'll go plant some okra but I have no plans to get waxed. I'll be debating the hair-cutting issue. Probably until next winter.