Another beautiful day here in Lloyd. Mr. Moon and I just had our breakfast, late enough to be brunch but it wasn't brunch because there was no cantaloupe.

I am feeling very, very fragile.

Meanwhile, the world goes on. Miss Lilly is having a very active dip in the pond, diving down and shaking her feathers. Now she's out and grooming herself. Nope. Back in. The water must feel really good today. She hangs out with the chickens all the time now, greedily shoveling into her mouth whatever comes to her. She lays me an egg every day. She is a lovely duck and I am glad that she is not grieving herself to death.

Mr. Moon and I are starting to talk about letting the baby chicks out into the world with their mother. They are still small enough to be very tempting to a predator bird or cat but big enough and with enough flight capability to probably avoid being taken by a snake in the daytime. I know they want out but I'd rather err on the side of caution, even with such a fierce mother as they have. I bring them the weeds I've pulled so that they can peck through the dirt on the roots for bugs. Same with the now-lacey collards and kale I'm pulling which have tiny worms on the undersides of the leaves.
Eat and be eaten.
Nature goes back and forth on that equation.
I tell you something that occurred to me today though and it was not the first time I've had this thought- hens are frequently better mothers than humans. So are pigs and dogs and cats from what I've seen.
I'll leave that one there.

We're going to leave here in a little while to go see these girls play a set at the Florida Folk Festival which is a big, big deal. 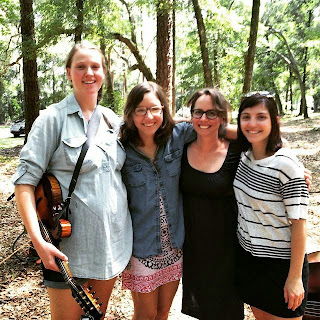 The world-famous, beautiful Cicada Ladies! For those of you who may be newish here, this is a group that Jessie started playing with in high school. And although going to a festival is probably the last thing on earth I'd choose to do today, seeing my daughter and those girls whom I have known and adored for so long is not to be missed. Jessie and Melissa, the girl next to her, have been friends since middle school. And these performances this weekend are Jessie's baby boy's first gigs! So I can't/won't miss that. And Lon and Lis will be playing too. It'll be good for me. I've asked my husband to just hold hands with me a lot. He promises he will.

And. Thirty-seven years ago today, I was in labor with my May just about seven miles down the road and it was a day as beautiful as this one. Her birthday is tomorrow. I am the queen of long labors but every one of them was the most worthwhile thing I have ever experienced. I talked to that sweet woman this morning. It is so hard for me to comprehend how these babies of mine have grown up to be my very best friends, but it is true. In a few weeks it'll be Hank's birthday and he is going to be in Pennsylvania but we shall have a family party next weekend, I believe, before he leaves. May wants to hang out tomorrow afternoon, shopping in a funky part of Tallahassee and that will be fun.

Lily just sent me this picture with the text, "When he puts his underwear on himself." 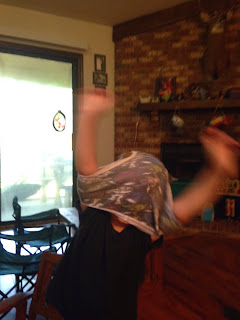 Oh, Gibson! How you do make me laugh!

Can I say that I find Ireland's vote to legalize gay marriage to be one of the most beautiful and heart-touching things I've heard about in years? People flew home from all over the world to cast their votes for equality and love.
Yeah, the world is full of a great deal of horror and shit but sometimes...sometimes...we get it right.

Maybe not the first time (see picture of Gibson above) and maybe not the ten millionth time. But eventually, sometimes we do.

All right. Here we are. Let's do our best to concentrate on that which is beautiful and true and real and good. Banjos may be involved.