A Fine Book, A Fine Day 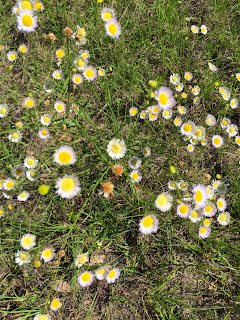 The daisy fleabane is blooming but I think it should be called the sunny-side-up plant. The tiny blossoms look like nothing more to me than lovely eggs.
That was one of the things I saw on my walk this morning. I woke up feeling a bit dread-full and extremely low in the self-esteem rating system but taking the walk helped tremendously and it is a gorgeous day. I managed to get in four miles (if I can trust that built in pedometer on the iPhone) but it would have only been 3.75 miles if I hadn't forgotten my dog-fennel stem which I use as a walking implement at the post office when I collected my mail. The stick isn't sturdy enough for either defense or support but it is nice to twirl and poke at things as I walk and I am fond of it and so went back and retrieved it.

But that's not what I wanted to talk about. I want to talk about James Lee Burke. I am now listening to his book, Creole Belle, and just enjoying the hell out of it. 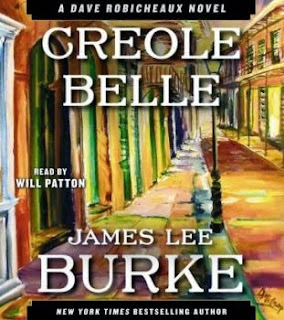 Will Patton, the narrator, is a very good reader and has narrated all of the Burke books I've listened to which is a goodly few and as many as I can get from the library. I suppose Burke is known as a crime novelist. There is plenty of crime in his books. But my gosh- he's just such a sensual writer. He's a bit of a conundrum to me. He can go from the most bloody graphic scenes to the most beautiful descriptions of nature in his beloved Louisiana. He can paint an image of a woman that will leave you a bit short of breath. He is a rabid environmentalist and manages to get that across in beautifully crafted quiet rages. He talks about addiction, morality, immorality, racism, greed, history, prejudice, ignorance, vice, redemption, grace, evil, suffering, the magic and miracle of love and faithfulness and devotion between humans in every sort of relationship.
And ham and onion sandwiches.

So. Yeah. I'm recommending this book. It's one of his Dave Robicheaux novels which go back a long, long way but you could start with Creole Belle if you wanted to. Here's a nice short little interview with him from Men's Journal in 2013.

That and how mild and sweet this day is with all of its light and breezes. Mick keeps trying to call the hens but they aren't listening to him. It's sort of humorous, the way they do that sometimes. Poor fellow, he's still a young'un in their eyes, I suppose. Plus, they probably get tired of his constant sexual needs.

The baby chicks are getting their pinfeathers and it won't be long before they're flapping about.

Well, that's about it. I think I'll go eat some lunch. Wish I had some ham to make into a sandwich with onions but I don't.