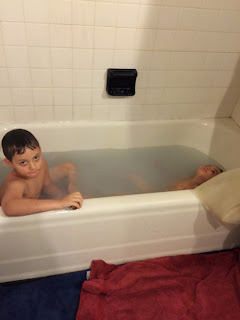 When did Owen become a film star? Sheesh. Look at those eyes. Those boys just left with their papa and Mr. Moon's in Orlando and here I am, alone and fine with that. It was a LONG day. But a good one. And a holy one if cleanliness is next to godliness in that the boys had two sessions in the pool, 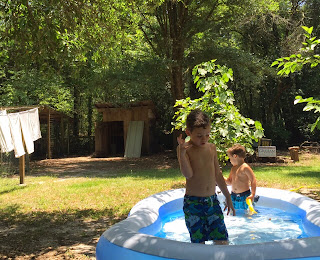 one followed by a warm shower and the next by a warm bath.

But the best part of the day was all the funny stuff that got said.

Gibson got two little skillets out of the cabinet and started walking around the kitchen with his feet in them, sliding them along.
"I Mr. John! The painter!" he said.
Mr. John IS the painter who is painting the exterior of the duplex that Lily and Jason and the boys live in. Gibson is fascinated by Mr. John. Why wearing skillets on his feet made him feel like Mr. John, I do not know but it did.
Gibson also asked me if I have a baby in my tummy.
"No," I said. "Do you?"
"No," he said.
"That's right," I told him. "I'm too old and you're too young."
"Also, you're a boy, Gibson," said Owen.

Later on we were watching Dora The Explorer which is a pretty far-fetched show if you ask me. One of Dora's friends had found an ancient ring with a curse on it and when he put it on his finger, he got tiny. Much magic and hilarity and singing ensued in order for the friend to get big again.
"I don't know," I told Owen. "I think maybe he should just stay small."
"Why?" asked Owen.
"Well look," I told him. "You can ride cats and mice and stuff like that."
He thought a second. "There's one problem with that." He paused. "Actually, there's about a hundred million problems with that."

But the best was when Owen asked me if I ever make out.
"Do you mean a make-over?" I asked him. We have traveled this conversational path before.
"NO!" he said. "Like kissing and stuff."
"Yes," I told him. "I do make out with Boppy sometimes."
"Don't ever let me see that," he said, and stuck his head back into the shower curtain.

All right. I'm going to go take my shower and get in bed. Don't let your grandkids see you make out. They really don't want to.