At Least I Haven't Seen Any Bears

Yesterday was action-packed.
Okay. For me.
I discovered early in the afternoon that I had forgotten to close the little sliding door which keeps Mama and her babies in the coop and so of course they were out. They seemed fine, scratching under a rosebush nearby but it freaked me out and so I went and cooked their egg and tried to lure them back into the coop but that drew all the rest of the birds, of course, and then I discovered this. 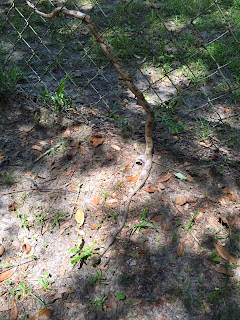 Yeah. Hard to see but yet another oak snake and it was on the fence about two feet away from where the little family had been. I could not get those chicks back into the coop and the damn snake can get in the coop anyway so I was texting Mr. Moon and he couldn't get home and he kept telling me to kill the snake and I just COULD NOT do it, no, I could not, and in all of the excitement, Willy and Lilly were having sex all over the place and Mama and the chicks escaped to the ivy. 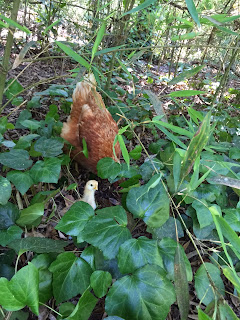 I just kept stalking them, trying to figure out how to capture them and those chicks are like popcorn on wheels, forget it. And Mama- well- anything that gets near her babies (including me) gets bowed up on and pecked. The mosquitoes were fierce, I couldn't find the snake and well, it was just a cluster-fuck.

Finally I decided that Mama would take care of her babies herself, I took my mosquito-bitten, thorn-torn hide back to the house and just kept an ear and and eye on the situation. A few hours later they were right by the coop and I got Mama back in with some corn and picked up the babies (they were wedged between a door and the hen-house wall) and threw them in the coop with their mother and that was THAT!

And they are all fine this morning.

Here's a picture that Lily sent me yesterday from an outing she and the boys took with darling Lenore and her mother to the Jr. Museum. 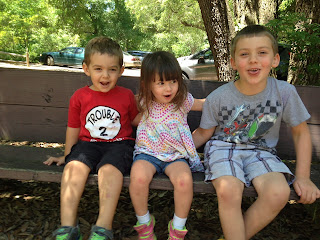 Those boys are coming over here this afternoon and I need to get to the store. I am out of soy sauce and that will not do.

Let me just say that there are too many snakes in this yard but that I can't kill any of them. What good would it do anyway?

All right. That's the news from Lloyd, Florida this morning.