The Truth Is Brutal And So Is The Run-On Sentence

So I did today exactly what I should have done which was to get on with it and let myself cry when I needed to (and mostly I needed to when I read y'all's comments, thank-you, thank-you, maxima thank-you) and I cleaned and tidied some and then the boys got here and then it got busy for awhile.
Owen wanted to go hiking which meant he wanted to take the tipi that Bug gave them outside and set that up and whittle his hiking staff into something resembling a weapon and get a backpack ready with supplies. The backpack part was easy as all he wanted was water and Cheeto's and the tent was easy because it's light as a feather and you just set it up by spreading the poles. The whittling was a bit of a problem in that I'd only give him a butter knife. But he did his best. Before he got everything settled and ready though, Gibson decided that he HAD to play in the water wiggler or whatever that thing is and I set THAT up and took off his clothes and he played in it naked until Owen observed that that looked like a lot of fun and he got naked and they played in the water long enough for me to drag a chair over, get a glass of water and my most recent Vanity Fair. By the time I'd just settled down into that, Gibson had had enough and was freezing cold and so he had be dressed again after drying off and given a piece of cheese and I got him cozy on the couch under a blanket to watch Tom and Jerry and then Owen had to get dressed again and that included putting his boot back on and that sucker has enough buckles and straps to adorn a strait-jacket and while he was getting dressed we had the best conversation ever.

"Mer, did you know that sometimes when people get really old they forget how to use the bathroom and have to wear diapers?"
I told him that yes, I knew that.
He thought about this a second and then he said, "Who has to change those diapers?"
Before I could even think about it I said, "Their grandsons."
He looked at me with horror, put his head into his hands and said, "Oh man. That is going to be disgusting!"

I am so damn impressed that he didn't just say, "No way!"

And after that conversation, what could I do but feel more cheerful and then Gibson fell asleep on the couch. 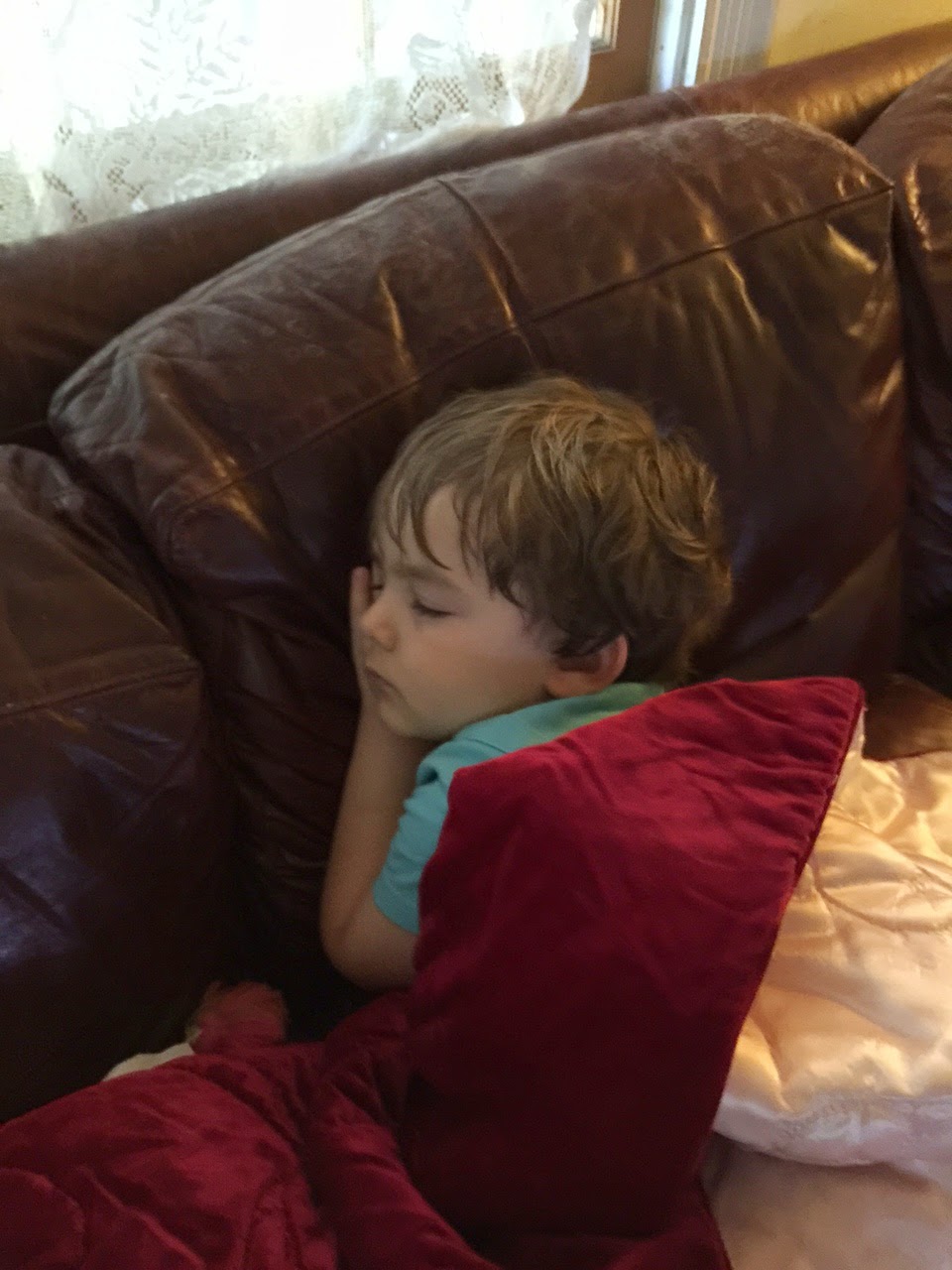 Owen finished up whittling his weapon and got his backpack on and went out into the yard to hunt animals and hike. I am trying very hard to let my grandsons be a little tiny bit more free range which means that I let them play outside sometimes where I can see them but that they can't necessarily see me. So I told Owen that he could hike and hunt animals in the yard but not to go out of the fence. I let him be for a few minutes and then went out to just get an eye on him and he was only a few yards from the kitchen door.
"How's it going?" I asked him.
"Fine," he said, poking his weapon-staff into the iron plant by the fence.
"What sort of animals are you hunting?"
"Snakes."
"Have you seen any?" I asked him.
"Not yet."
"And what are you going to do if you see a snake?" I asked him.
"Let him be in peace," he said.
"Good plan."

He didn't find any snakes but he did find some interesting insects which he wanted to show me. I asked him if he wanted to go see if we could find the snake in the hen house which I saw again this morning. 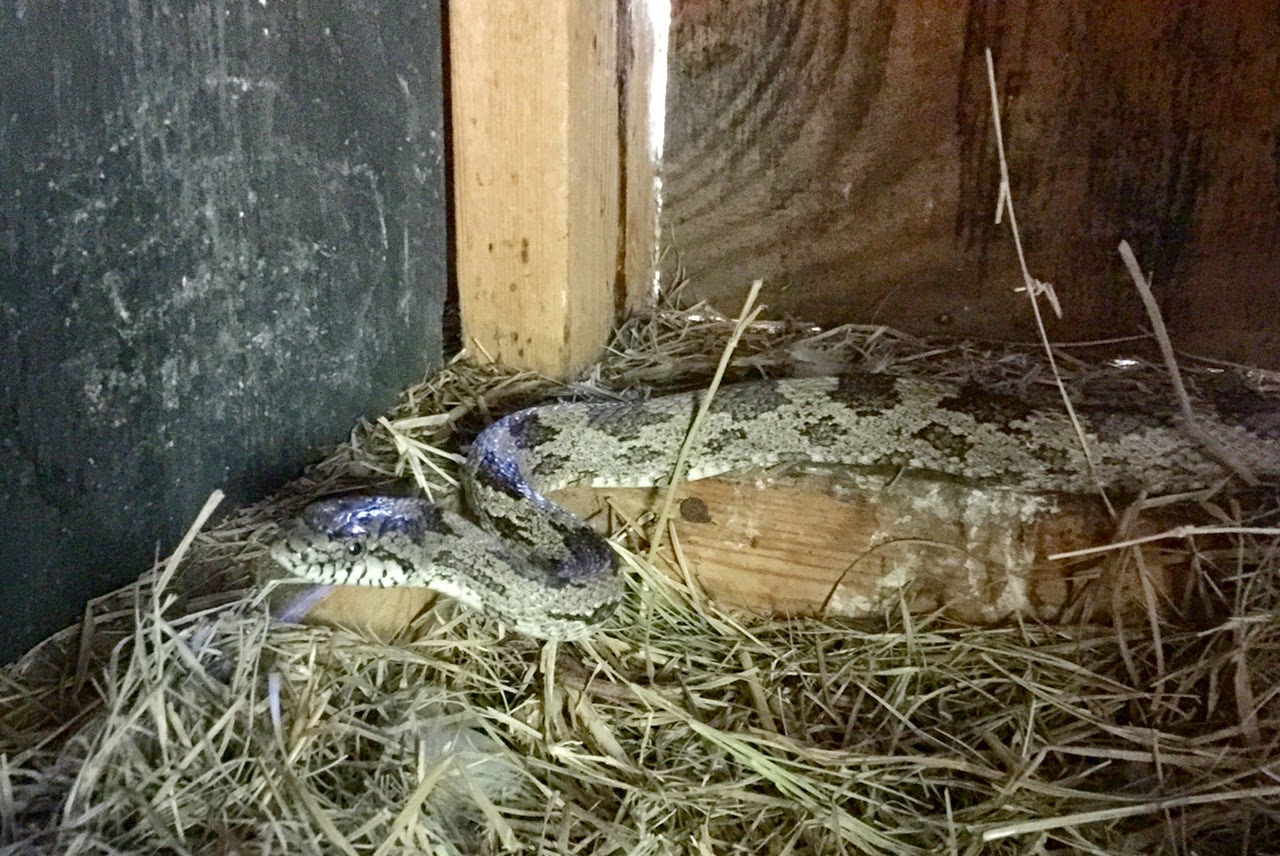 "Are you trying to kill me?" he asked. Which reassured me that he's not really that interested in finding snakes.

After his hiking and animal hunting were over he came into the house too and we had a quiet hour while he played a game on the iPad and Gibson slept and I read some Vanity Fair where I learned that Kate Atkinson's new novel, "A God in Ruins," is coming out in May and that it's a sequel to her "Life After Life" and boy oh boy, am I excited about that. "Life After Life" was one of the best books I've read in years and I hope with all of my heart that this one is as good.

And then Gibson woke up in a fine and cuddly mood and Owen ate most of his Cheetos and gave the rest to the chickens and Gibson ate a muffin and they both had some ginger-ale and then their mama got here to pick them up. Gibson was ready to go home with Lily but he asked me, as he almost always does now, if I was coming home with them. I told him that no, I was not, that I had to stay here and make Boppy his supper and he did the thing where he grabs my chin and kisses me many times and then he said, "No more kissing," and that was enough and I kissed Owen good-bye and Lily too, and they drove off and I was so exhausted. Physically, it was the easiest day but emotionally, I guess it had been a bit more difficult. But I drank some iced espresso and got in the garden and weeded out a spot where I want to plant cow peas and mulched it good and even girded my loins and gathered my moral fiber and pulled the mustard plants and fed them to the goats and Mr. Moon got home with chicken feed and scratch and a new bale of straw for me to use in the nests and here we are.

I will indeed make Boppy his supper which is going to be a reheating of last night's good soup with some of the last of the greens and carrots from the garden and also the first of the potatoes and lots and lots of other stuff. It was incredibly delicious last night and will be even more so tonight. And I made bread yesterday with rosemary and Calamata olives and I'll heat that up too.

Well, best get to it.

Happy Earth Day. I have earth all over me and will definitely be needing a shower before bed.

Forgive me if this is all discombobulated and weird. I've been heavily disassociating all day long except for when the boys were here and my brain's checked out, filled with cotton and mist and I'm writing this on automatic.
All-in-all it was a very good day and I hope I didn't scar my grandson with the diaper thing.
He picked me a rose later on so maybe not. 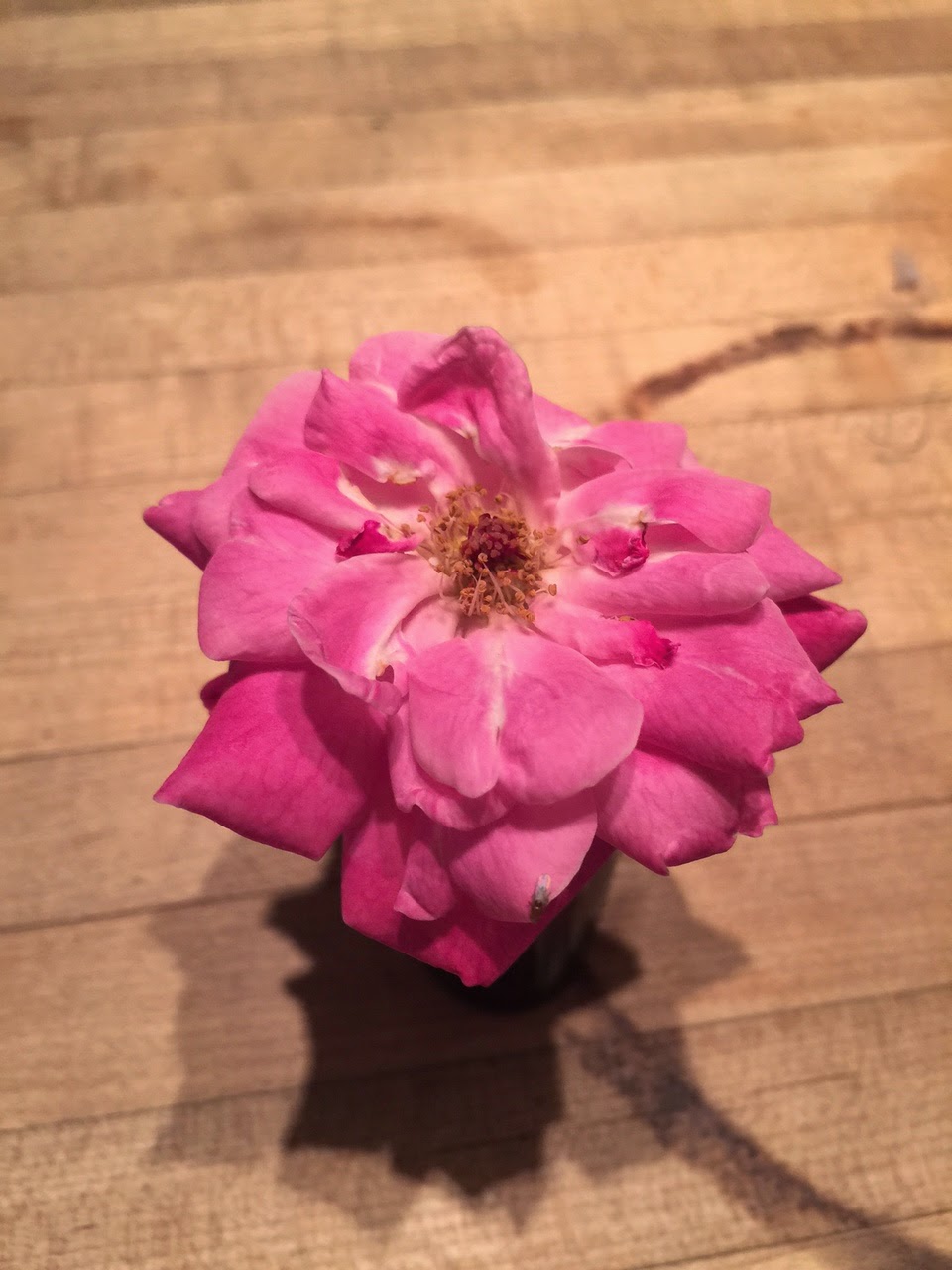 Frankly, I hope to die before I ever need to contemplate adult diapers but we get what we get.