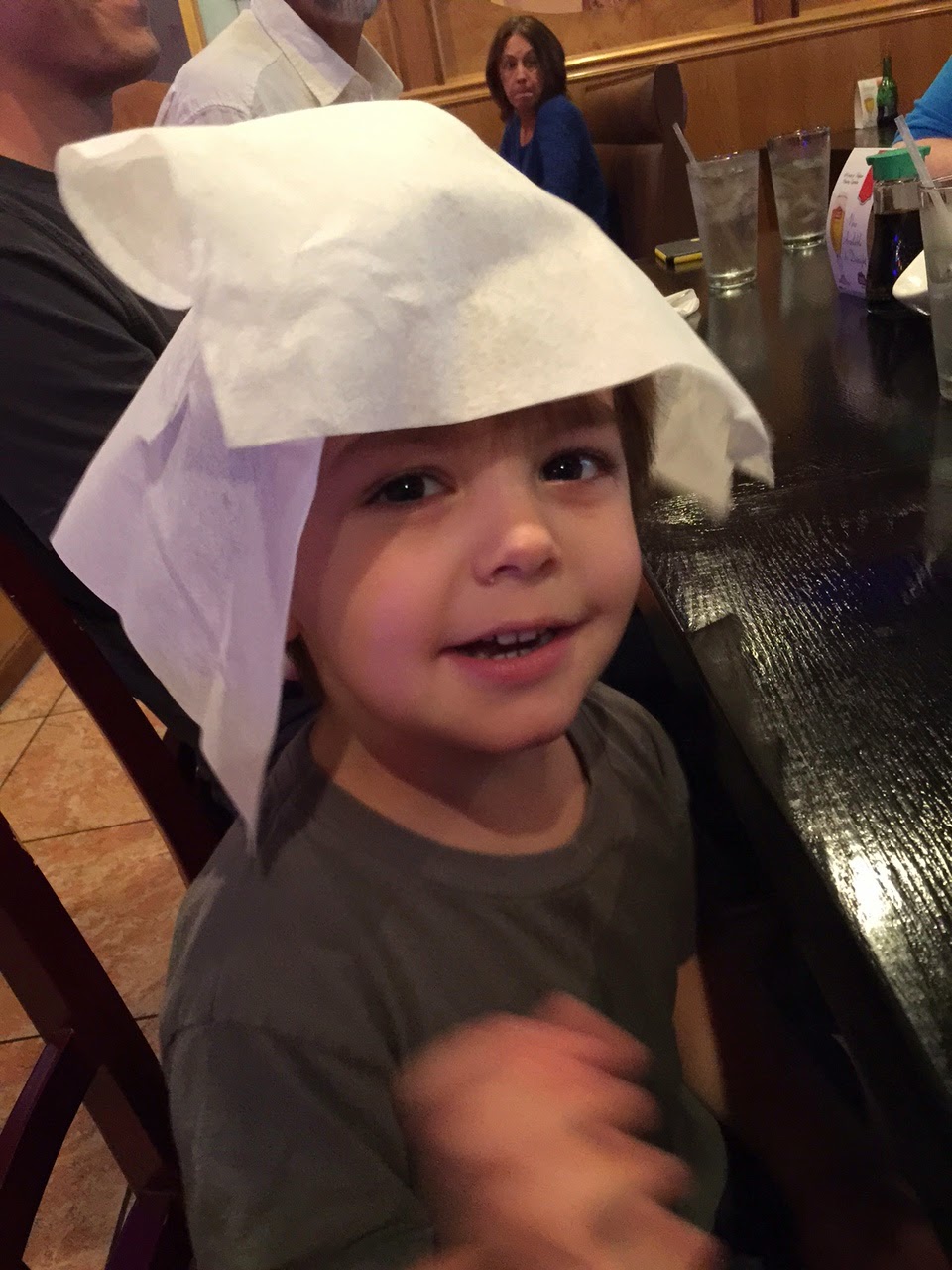 Lunch was so much fun. I got there first, dressed in an actual dress with make-up on and my hair braided and pinned to the top of my head in a grandmother crown, and asked for a table for eight and soon Lily and the boys came and I got such good hugs and kisses from them and after that, every time one of us got to the restaurant, whoever was already there got up and kissed and hugged the walker-in.
You know, I've made a lot of damn mistakes in my life but when it comes to having a loving family, I have not failed.
Mr. Moon brought flowers for Jessie, a dozen beautiful red roses and we all ordered our delicious foods and feasted. 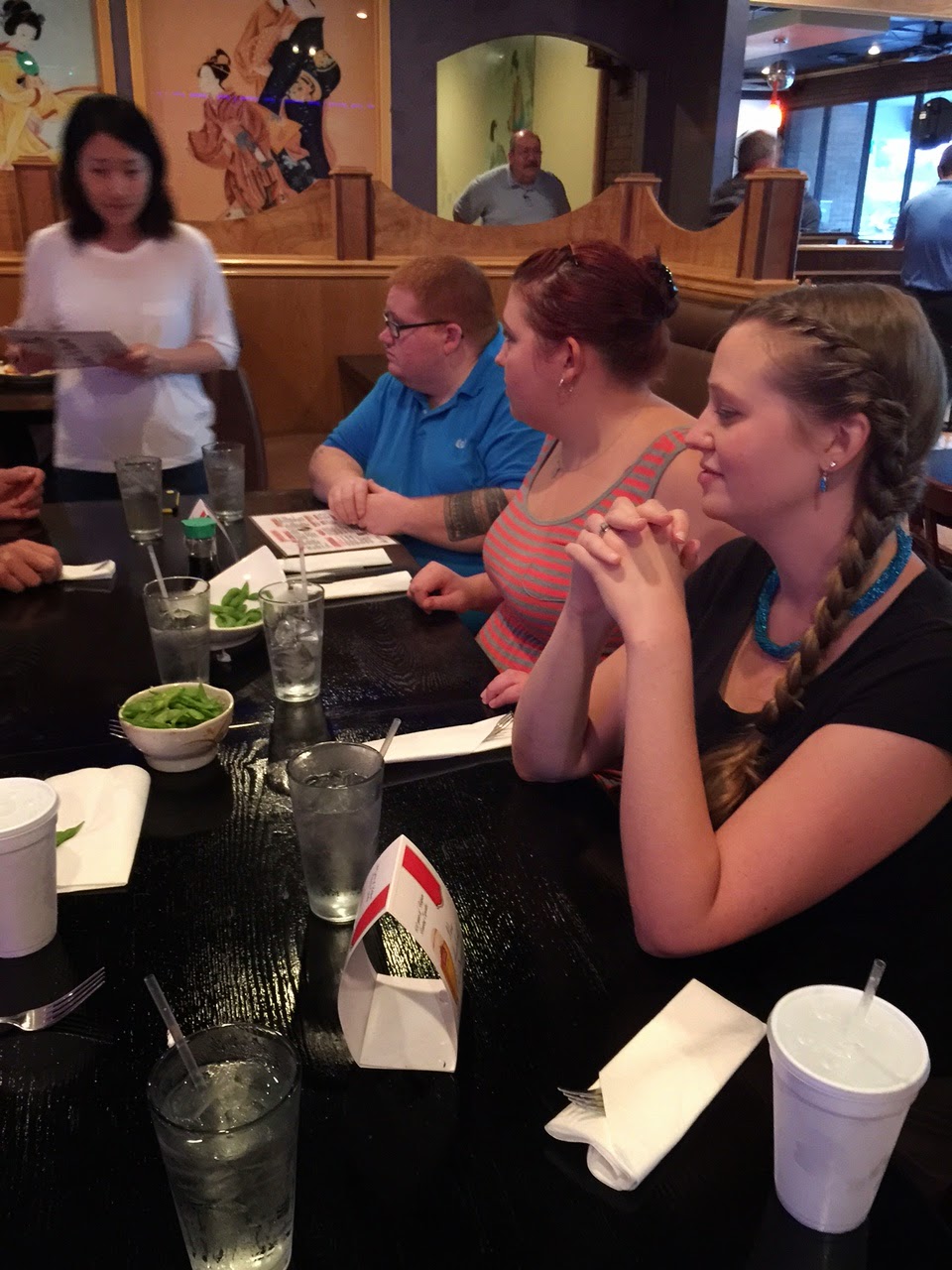 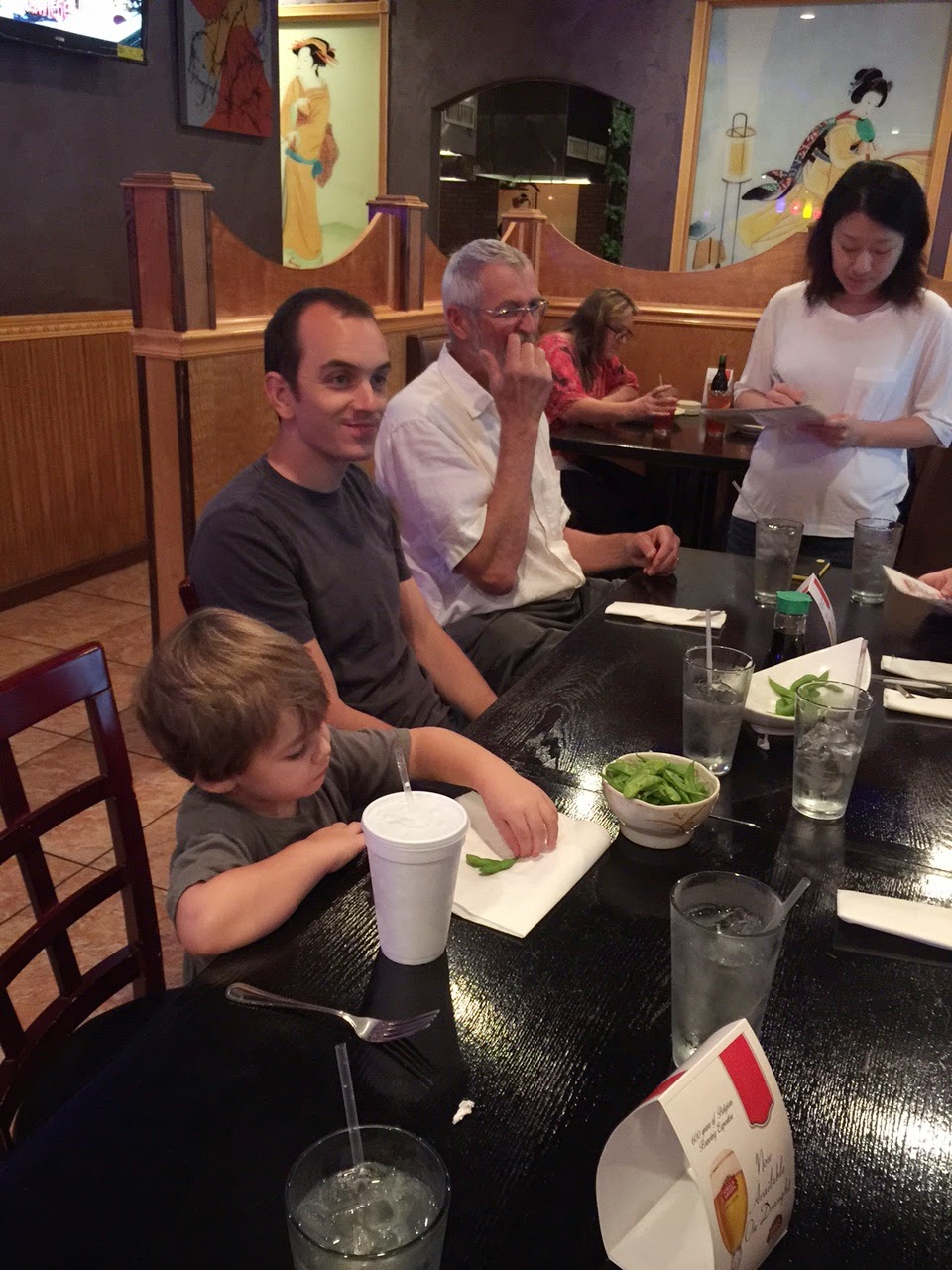 Gibson, as usual, ate almost all of the edamame beans. His newest thing that he says that makes me laugh is, "I don't know." He says it in sort of a wondering tone. And so I ask him questions to which I am sure he will give that answer.
"Gibson, what is in that miso soup?"
"I don't know!"
Etc.

I didn't get one picture of Owen. I am not sure how that happened.
The only thing not perfect about lunch was that May was not there. She was working, of course.
Sigh...
She works so hard. We love her so much.

After lunch Glen and Vergil and Jessie and I all met up at the radiology place, the same place where I go to get mammograms and I was so glad to be there for a reason other than getting a mammogram and they called us back and they did the scan. 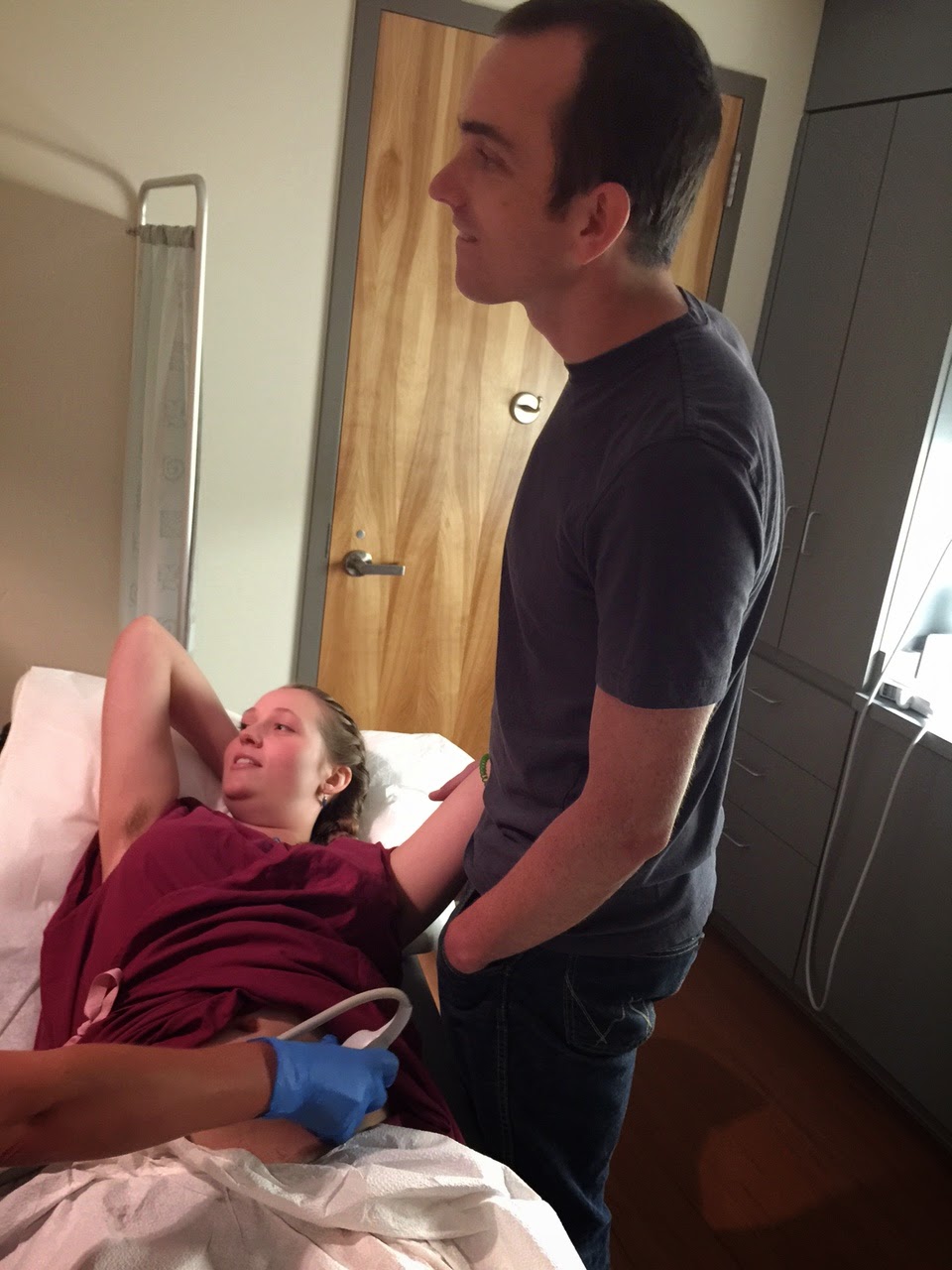 Of course to me, everything on the screen with the possible exception of feet (and there are two!) looked like an alien baby to me. But I saw a spine and two legs and two arms and hands (two!) and a head (one!) and a bladder and ribs and a beating heart. Mr. Moon and I held on to each other as Vergil and Jessie held on to each other.
The technician determined the sex of the baby and because Jessie and Vergil have not yet told all of their people, I am not going to tell you here either.
But. Take my word. It is a baby. And all looks well with the baby and surprise, surprise! This baby has long legs and feet.
We all cried. And hugged. And kissed some more.

Before we got out of the parking lot to go our various ways, Mr. Moon had plundered two beautiful magnolia buds, one for me and one for Jessie. Here is what mine looks like in my hallway. 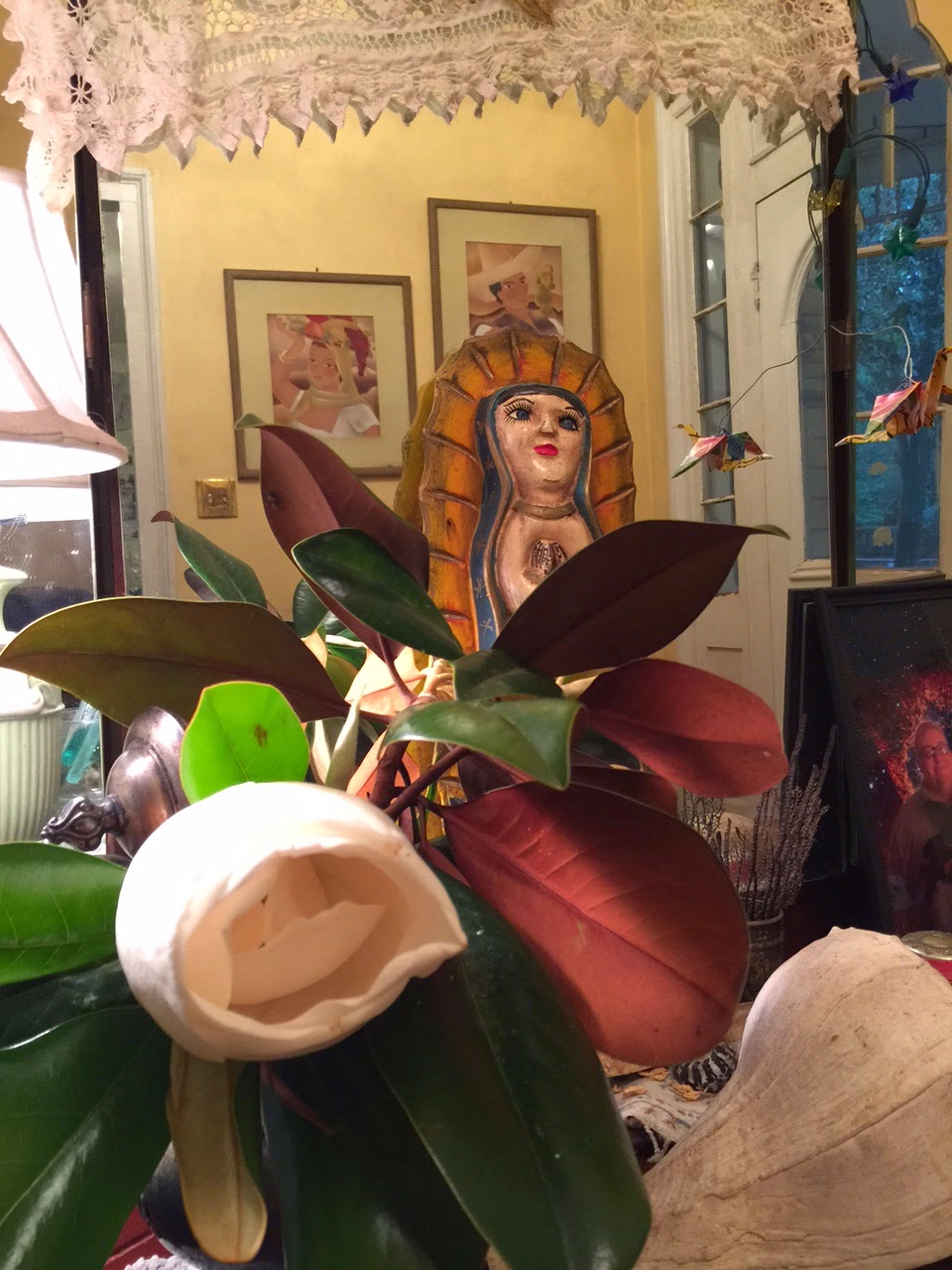 Jessie wanted to go shopping with me and so we drove off together, our magnolias smelling like lemony heaven, and she said something to me that I'd never really considered before. She pointed out that when she had been in my womb at the same age as this baby is in hers, all of her eggs were already there and so, in a way, this baby has been inside of me too.
I have often thought of the long line of mothers stretching back to the first mother, our hands clutched together in a chain. And this thought made that even so much more real.
The mothers.
Sort of blew my mind, to tell you the truth.

And we went and I bought sheets and we bought the baby a few little outfitty-things because we HAD to and we wanted to, and then I took Jessie home and went by Lily's because I had forgotten to give her the eggs I'd brought for her and Owen handcuffed me to his wrist because after lunch he and his brother and mother went to Big Lots with Hank and Hank gave Owen money to buy something and pointed out that handcuffs would be really cool.
I convinced him that since he had a T-Ball game this evening, it would not work for us to be handcuffed together and he unlocked me and I went to Publix and dropped off books at the library and now I'm home and the new sheets are in the laundry and soon Mr. Moon, the husband, the father, the grandfather, my love, will be here too after he's finished up assistant-coaching T-Ball.
I cannot believe my great good fortune. The fortune of all of this love.

As the baby's fingers came up on the screen this afternoon, Jessie said, "Soon I will be kissing those fingers."

As will we all.