Heaven, Earth, Rain, Dirt, Ducks And Rolling Stones. I.E. Same As It Ever Was 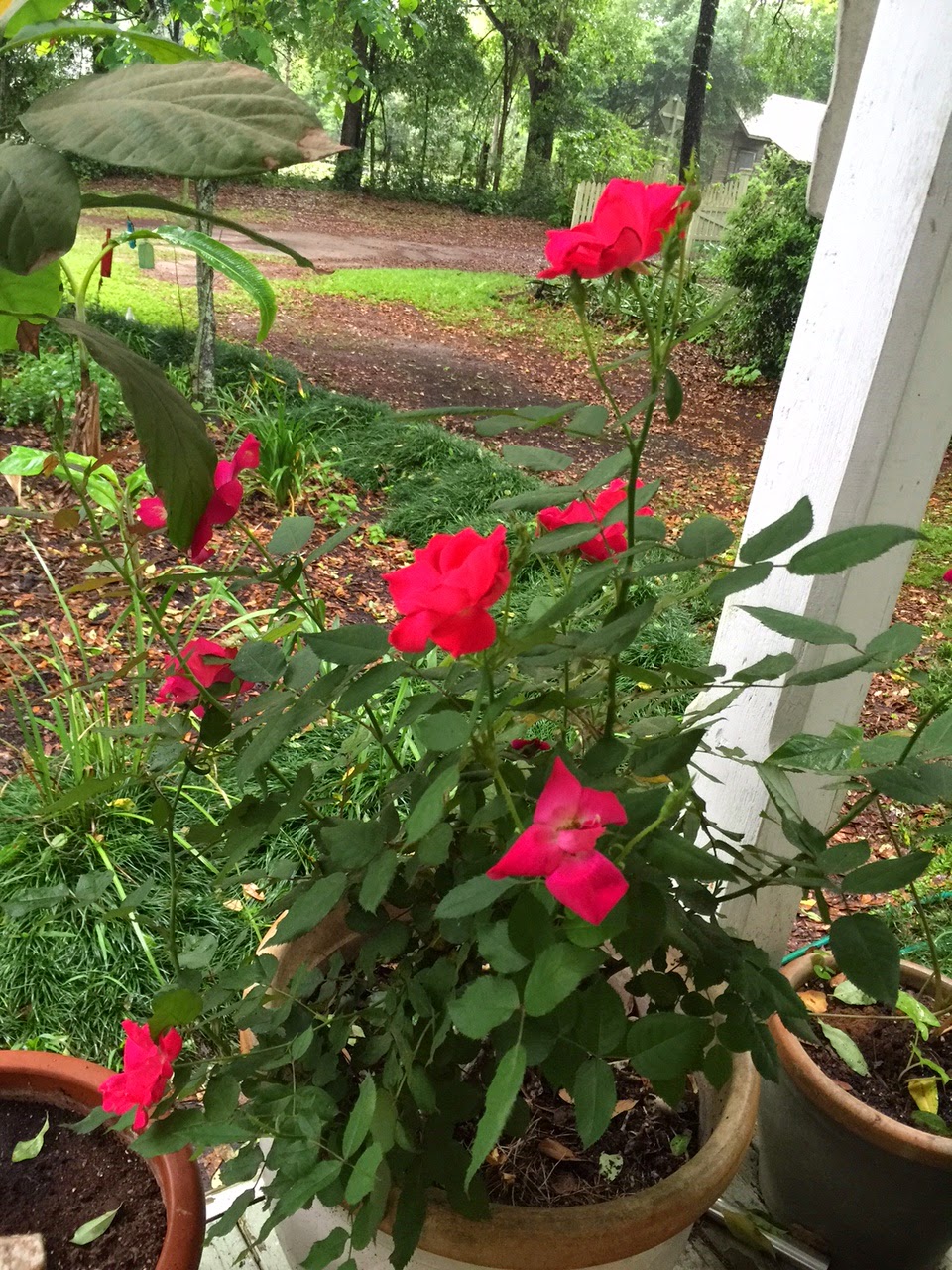 I have wanted to be outside today even though it has been raining almost all day and I did work in the rain for a few hours. It was blissful. I pulled Virginia Creeper and poison ivy and some other plant which seems to be taking over the front part of the yard and I do not know what the plant is but it propagates via roots and what starts out as a little sprig of something which has vaguely boxwood-shaped and sized leaves becomes a huge bush tree. I pulled and pulled and used the clippers I had in my back pocket when I could not pull hard enough and I wish I could have put in a few more hours, trimming palms and wisteria, fertilizing some things and weeding the tomatoes but it's raining too much for that now. I also want to transplant some things. Move some things. Perhaps tomorrow. Some days this urge to mess with plants and dirt and weeds just takes me over and at least in the drizzle it was cooler.

Oh, this rain! It is absolutely the most soothing thing, the sound of it falling, the liquid kiss of it. The soft gray sky it falls from. As I have said before, for Noah it was the cessation of the rain which brought his god's promise of love and care. For me it is the rain itself. I think of the year I moved here and how dry it was that spring and summer. I actually and really and fruitlessly (and I knew it) put a hose on the biggest oak tree in the backyard by the railroad tracks. The drought had made me that crazy. Sucking up water that the tree was probably trying to suck up on its own to make it travel through a green garden hose threaded through a wire fence to run oh, so ironically at the base of the tree. That tree probably has roots that reach down to the aquifer.
Well, the tree is still alive so who knows? And I think of how sweet the very real water of rain must feel to it and don't tell me that anything as magnificent as a centuries-old live oak has no feelings. I have no doubt that they are nothing like the feelings we short-lived humans have, any more than our feelings are like the ones that those insects which live for one day have. But. Yeah. I have to admit that I believe in the sentience of all things. Perhaps it is merely a romantic idea but I am allowed to have those too.

I think that whichever duck it was that was having problems this morning is probably okay. That egg was a big larger in circumference than the usual egg she lays. Or at least, that is what I am telling myself. All of the birds have been quieter than usual today but I think that's due to the rain. They straggle about in it and it does not seem to bother them as much as it just dampens their feathers and spirits. I feel quieter in the rain as well. 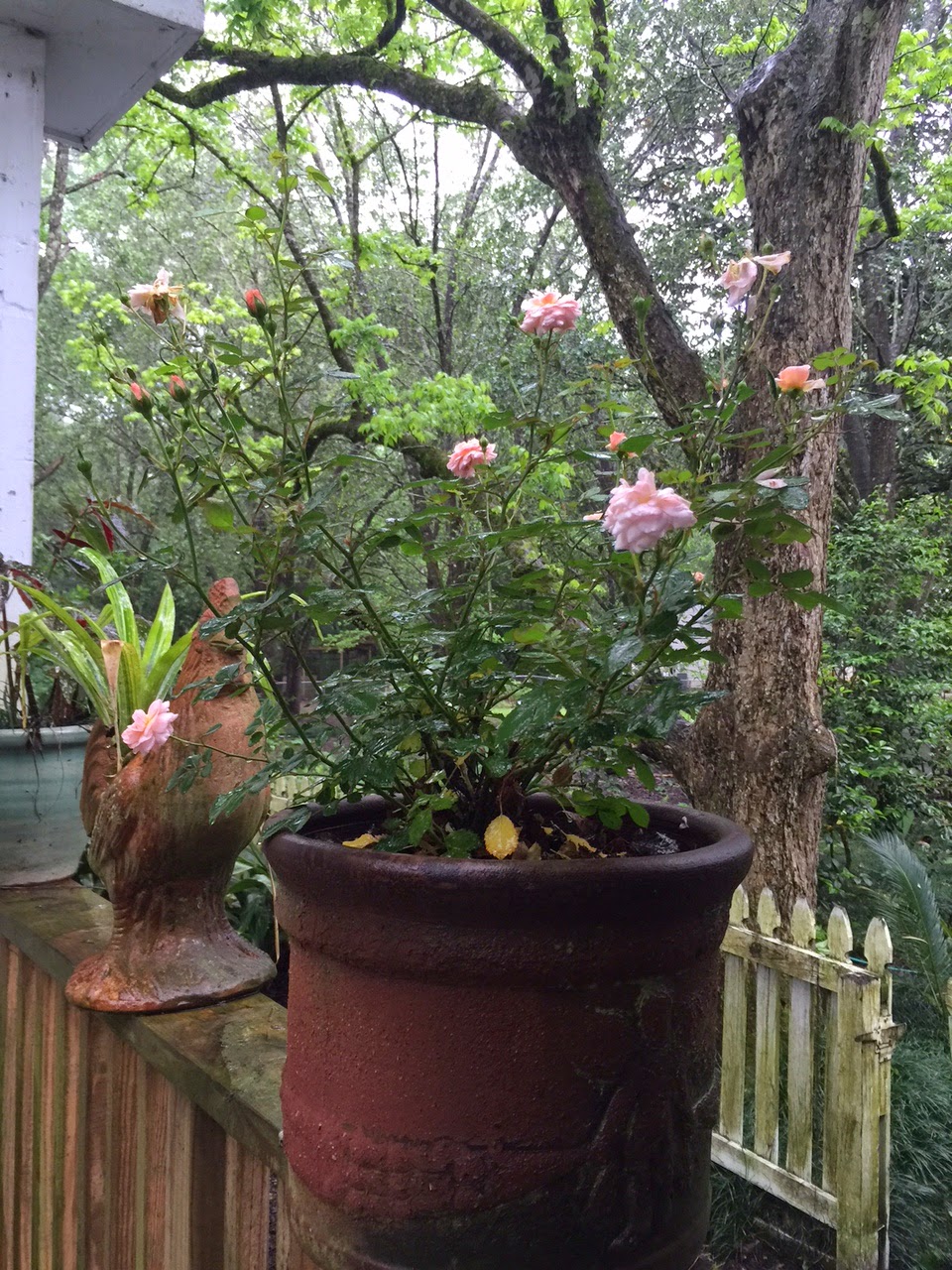 It almost frightens me how much I enjoy being alone, to be able to follow whatever whim I have as it occurs without thought for anyone else's needs or wants. It feels very selfish to say that and yet, I know that if I did not have the needs and wants of others to consider, these days of solitude would hold no beauty or enjoyment at all.  I would be so lonely, my life so bereft and without meaning without my husband, my children, my grandchildren. I know that but there must be balance whether in weather or in time spent in company and in solitude. In romantic ideas and fruitless efforts and pragmatism and common sense. In physical exertion and in rest. In fear and in wonder. In joy and in pain. In tears and in laughter, not too get too damn cliche about it all.

And speaking of laughter- I just don't even know what to think about this video but it sure as hell made me laugh.


It's nothing at all like yesterday's video and it's, well, I'm not sure. But somehow, it's hysterical AND the real true voices of Keith and Mick are in it. As well as very cute guys.

There has to be balance between dirt and Youtube, too, I suppose.

I'm going to go cook some chicken with pineapple and onions.

I'd smoke a doob with Keith Richardson. Would you?