I am destroying the environment. Yep. Me. Right now.
I have the air conditioner on which is bad enough. But do you know why I am running the AC? Because the house is really warm due to the fact that I am baking a pie.
This makes no sense.
Does it help to know that in a little while I'll be baking sweet potatoes?
No. It does not.

I feel so guilty. Jesus. But let me ask you this- if all we should eat in the summer are salads, why do all the lettuces and greens go to seed just as it gets warm? At least here in Florida, which, let's face it- may truly and really be Bizarro World and should you doubt that, just google "Florida man" as I have suggested before.

Did you see this? 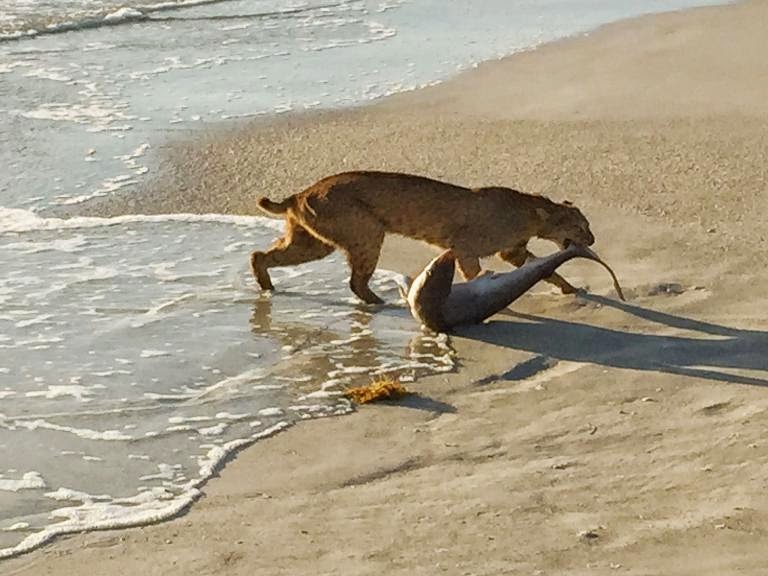 That, my loves, is a picture of a bobcat which caught a shark in the surf at the Sebastian Inlet State Park which is my old childhood stomping grounds. We used to go there before it was a park, before there were people living there and I, an eight-year old, would walk on the beach by myself for long distances. Not that I think a bobcat would have come after me. But oh yeah, we did swim there a lot too.

Okay. How did I get from destroying the environment to this?

Anyway, I am making a pie because Jessie and Vergil are coming out. They are spending the night so that they can get up at the crack of dawn and drive Mr. Moon's truck down to Tampa to pick up their kitchen cabinets. I think. So it's their fault I am destroying the environment.

That is so not true. It's because I'm a wuss and wanted the AC on and I'm selfish.
And which is why my grandchildren will not have the world I live in when they are grown.

Of course, I wouldn't have thought there would be bobcats coming out of the jungle to snag sharks from the Atlantic in 2015 so there you go.
Which is a form of stupid thinking and also denial and may I add- thank god for the parks system.

So I had lunch today with Mr. Moon and Lily and Gibson and Owen. He is proud of/hates his boot. It is hot. The sock is hot. The boot is hot. Together they are really hot. But he is sort of proud of it. For what it cost even with insurance, Lily may make him wear it for the rest of his life.

That's all I have to say except that today at the library a very dapper older man said to me, "I like your gray hair."
I was wearing it down because when I went to town it was so wet from sweat from my walk (not kidding you and gross, huh?) and I didn't quite know what to say so I said, "Thank you!"
And then he said, "That is very attractive to me."

I almost blushed and it was not one bit creepy or weird.

Okay, seriously. That really is all I have to say.

Love..Ms. Moon, Destroyer of the Environment