I Think I've Had A Sabbath 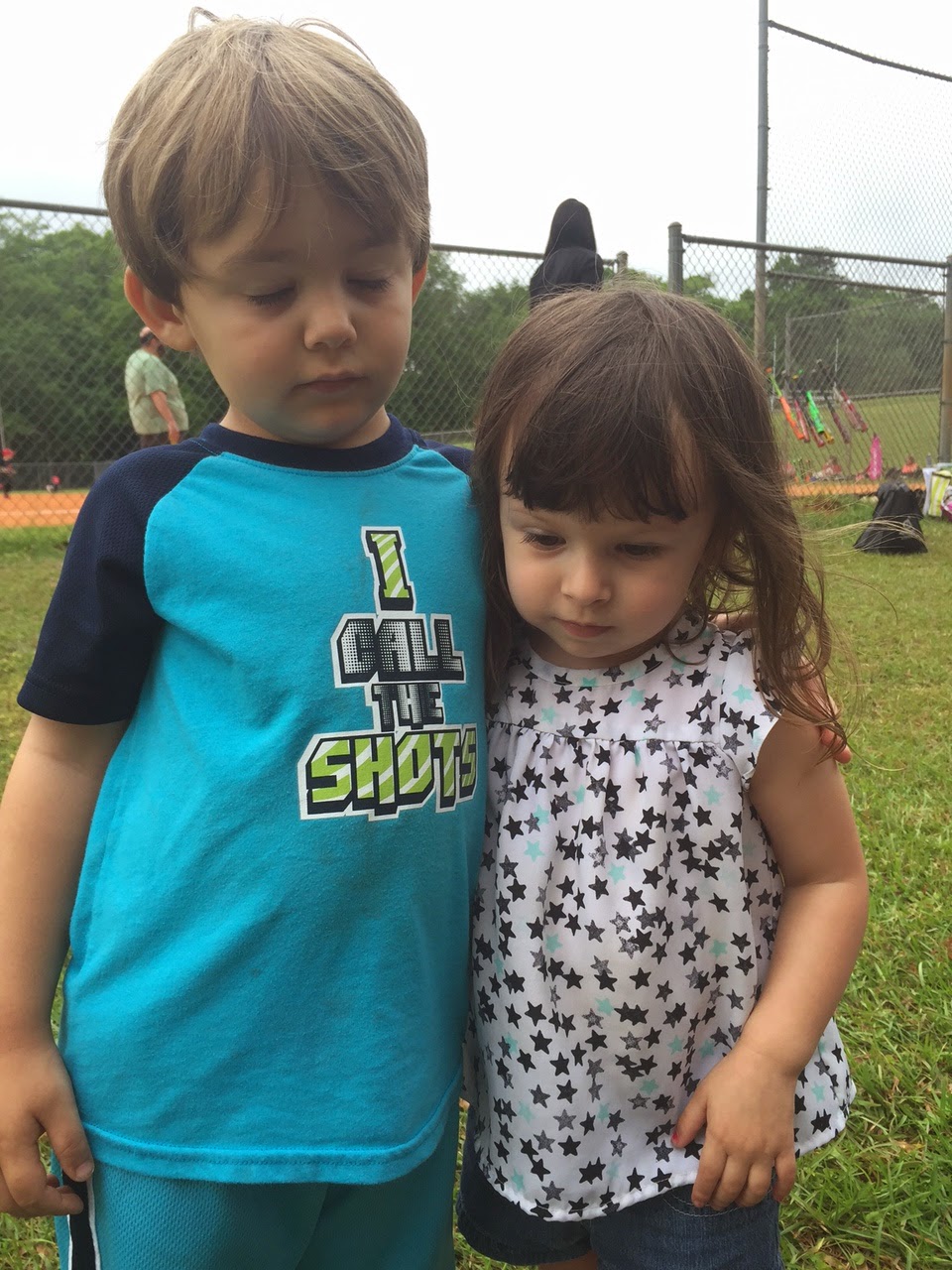 Even though this picture looks as if someone had just told these two children that their play house had burned down with their kitten in it, it's merely the only picture I got of Gibson and the darling, delicate Lenore while we were at the game and I wanted to post it because despite their somber expressions and Gibson having his eyes closed, it still conveys Lenore's fairy-child presence and Gibson's love of her.

We were at the T-Ball game and those two run around everywhere like team mascots, even on the field if we let them. I sat on a giant towel with Lenore's lovely mama while her daddy helped Mr. Moon coach the team. I never did get a very good picture of him either but here's what I got. 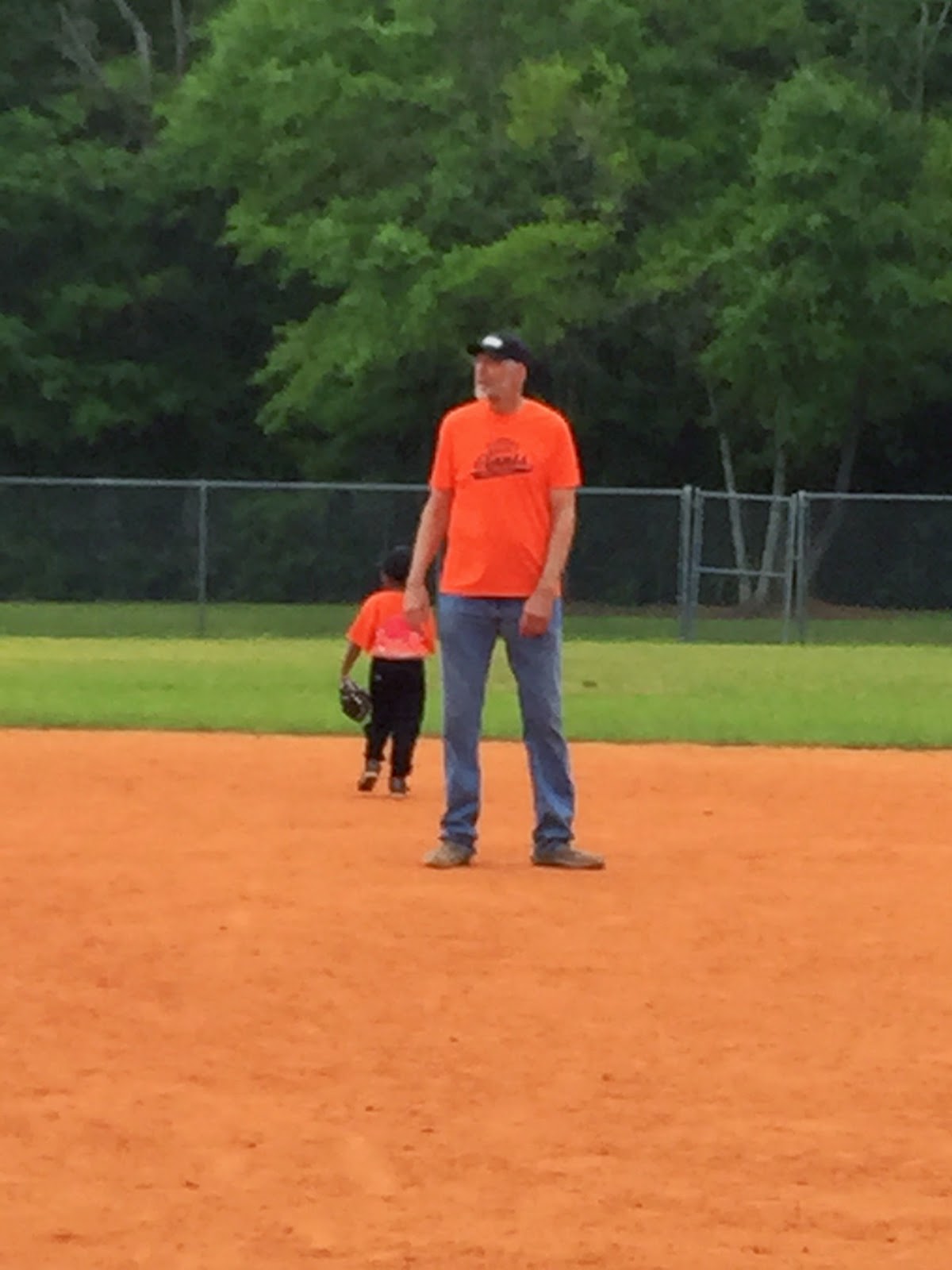 Isn't my sweetie a beautiful man? I love the orange shirts and the orange clay. He's so tall and some of the children are so little. It was adorable. The kids are playing better and rarely run straight for second base anymore if they hit the ball off the T. One child did try to trip another as he ran from first base but hey- good reflexes kid!

Owen wasn't allowed to play due to his foot injury and was the bat boy. However, he spent half the game running around with his brother and cousin, all of them ending up in piles like puppies on the grass.
"Mer," he told me. "I'm not supposed to run so I only do it when my mama isn't watching. Don't tell her."
Like she didn't notice.
He also picked clover and brought his other grandma, his aunt and me pretty little flowers. I stuck mine in my braids. He's such a gentleman, that Owen.

After the game we all went to lunch. Jason had to miss the festivities, being at work.

Here's a picture of Gibson loving on his Boppy. 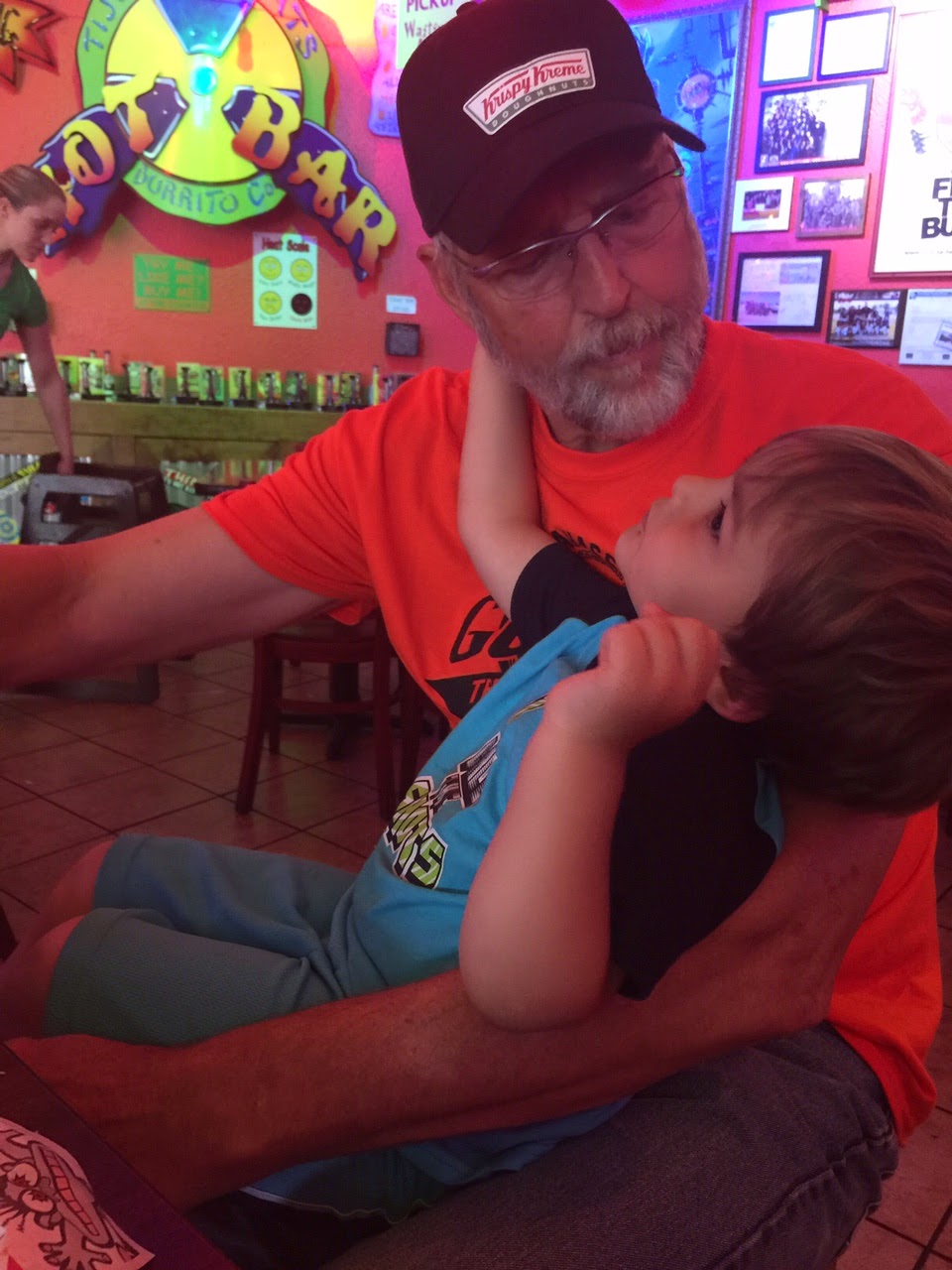 He loves to hook that arm around your neck. He is the most affectionate child. Yesterday when they were leaving and he was in his seat I went to kiss him. "No," he said. "No kisses."
But before his papa could drive away, he was yelling for kisses. He grabs me by the chin and pulls my face to his and would kiss me until the moon came out if we didn't eventually have to put an end to it.

Here's what the three cousins looked like after lunch. 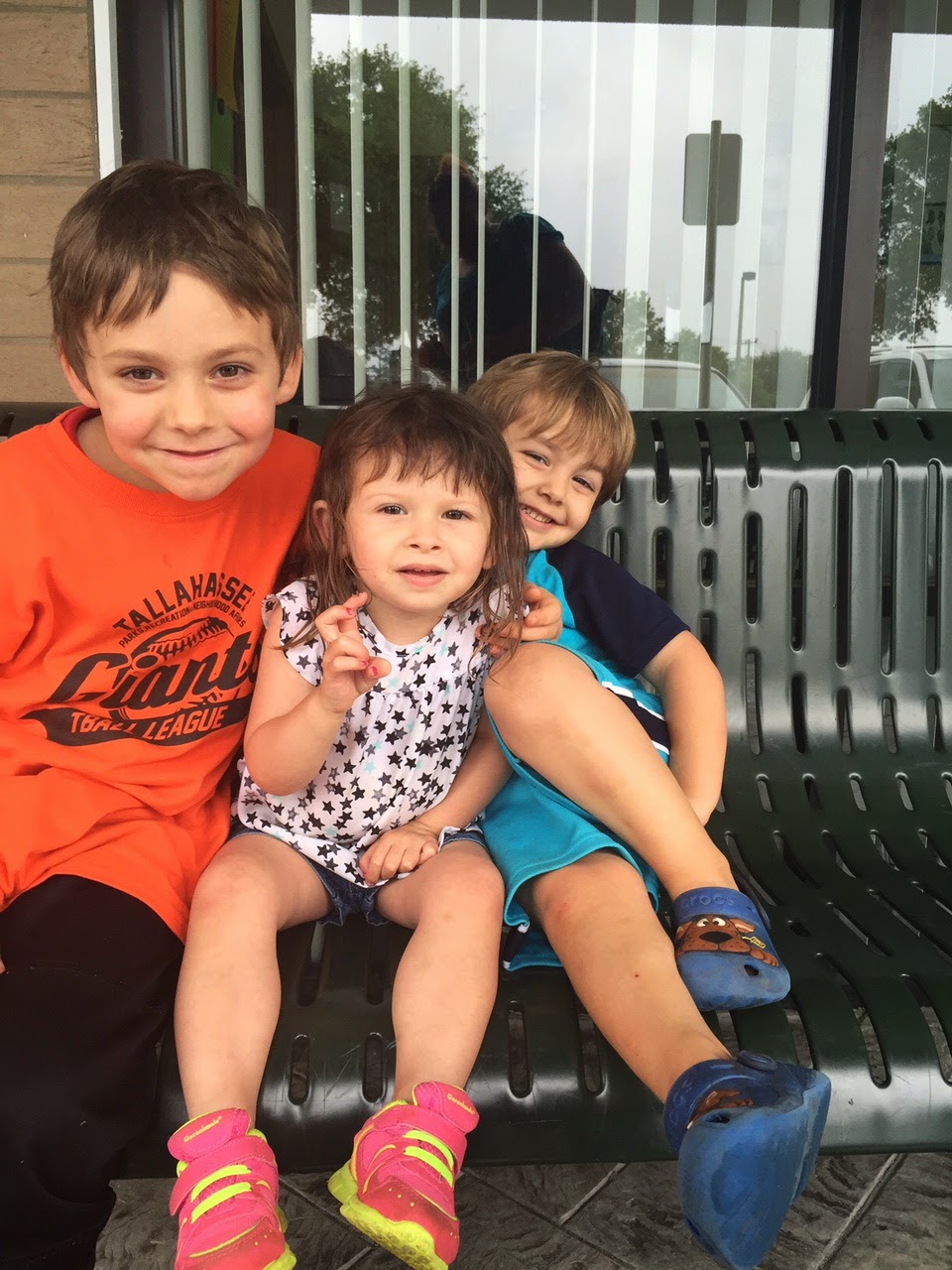 Mr. Moon went over to the rental property we have to paint after we ate and I came home. It was raining and I washed up the breakfast dishes and then, with the rain as an excuse, got in the bed and read until my eyes closed, which took about fifteen minutes, and then slept for an hour and a half.
This is probably the least productive day of my life and I love it.

It is still raining but very gently and I did go out and collect the eggs. The ducks and chickens do not seem to be disturbed in the least by the rain. I just went outside to take a picture of the ash magnolia's opening blossom and they rushed me for food, the ducks quacking in their rusty demanding cry. As I have said before, they think of me as nothing more than a mobile food dispensing unit but according to my dreams, I see myself the same way so there you go. 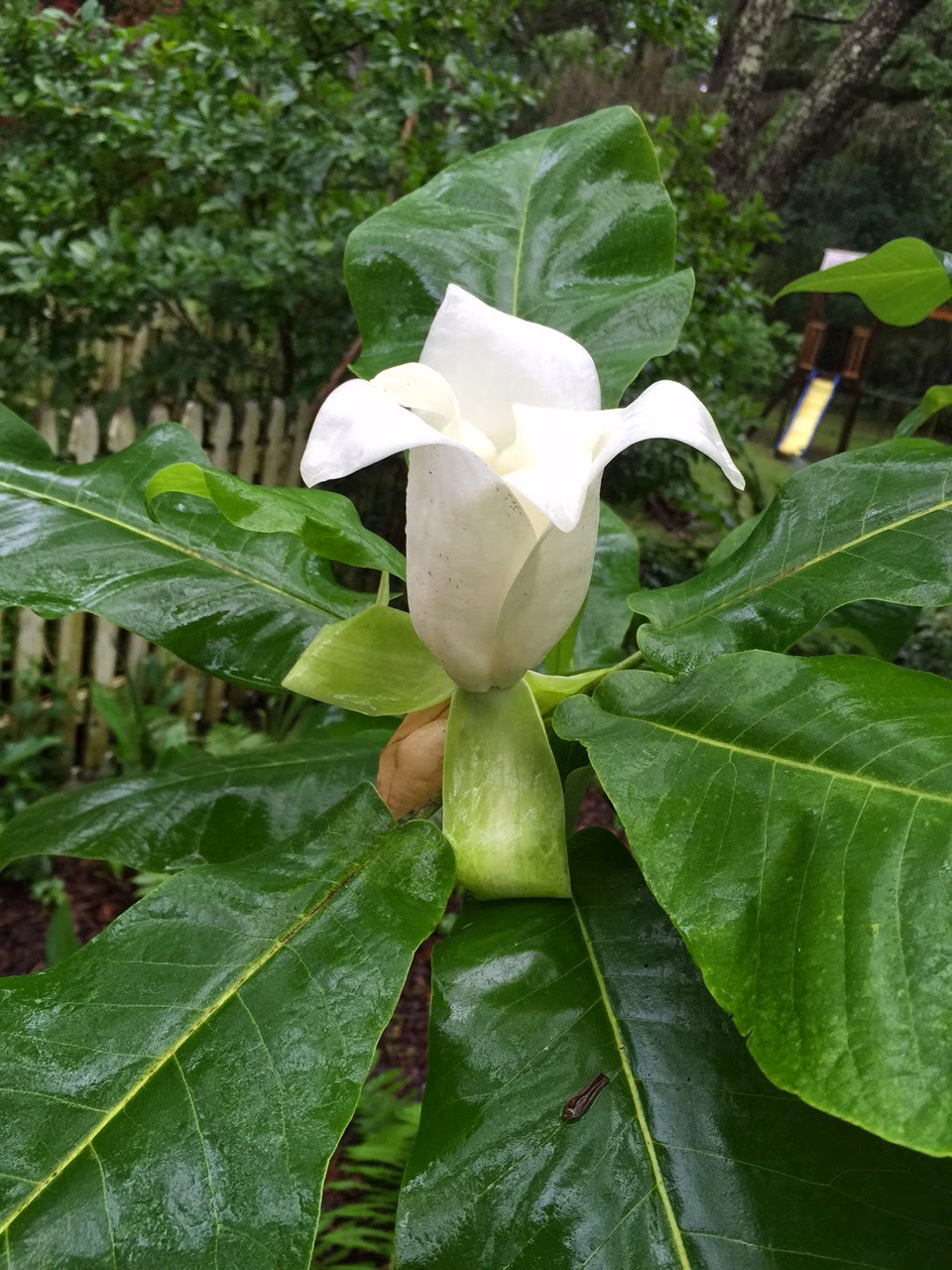 That beauty is as big as my hand. How it thrills me when it blooms! I planted it when it was naught but a tiny thing.

And so now Maurice and I are waiting for Mr. Moon. I'm going to go cook some rice to go with leftover beans, make a salad with tomatoes and avocado. It is so nice to remember that being productive can mean taking rest, taking stock, taking pictures of beautiful children, taking care. The rain falls and I feel as if my world is being taken care of on its own as the mulberries swell, the confederate jasmine blossoms begin to unfurl, my beans and peas and cucumbers and potatoes continue to grow, and for once, at least, I can let it all happen as it will.