It was a bit of a subdued group this morning who woke up in Lloyd. I'd been sitting with Lis on the back porch for five minutes before I suddenly realized what day it was.
"Happy birthday, darling!" I said, feeling so very ashamed because on MY birthday last year she gave me gifts every day for about a week, all wrapped and precious and lovely and treated me like a queen and here I was, almost forgetting that today is her day.
"There's your presents," I said, pointing out to the table in the backyard where an ashe magnolia in a pot stood as well as a little begonia in a green ceramic pot.
And I did have a card for her. So...I'm not a total jerk. But I'm sure not the kind of gift-giver she is.
Lis is just the finest kind. I made some toast and eggs for everyone in record time because Mr. Moon had to go help coach T-Ball and Lon and Lis are playing at a festival in Thomasville this afternoon. The T-Ball game got called for weather as it is raining and lightening and thundering but not until Mr. Moon had gotten there. We checked the weather report for Thomasville and it literally said "thunderstorms until 1:15 p.m. and then clear and sunny."
1:15 is the start time for Lon and Lis to begin playing.
God LOVES Lon and Lis as much as everyone else does.
So they got all spiffed up and took off but not before Lon helped Mr. Moon (who came back from the ball field) and me transfer the hen into the safety of the box-cage in the coop with her babies and eggs. When I went out to check on them this morning, a strange gray cat with a big fluffy tail streaked off into the woods and Mr. Moon saw the big orange and white feral cat last night in the yard. So really- we had no choice. I'm sure that orange and white cat killed Eggy Tina and Miss Missy and she'd have absolutely no problem eating those babies if not the mother, too. Hell- I didn't even trust Maurice around them.

So they went from this 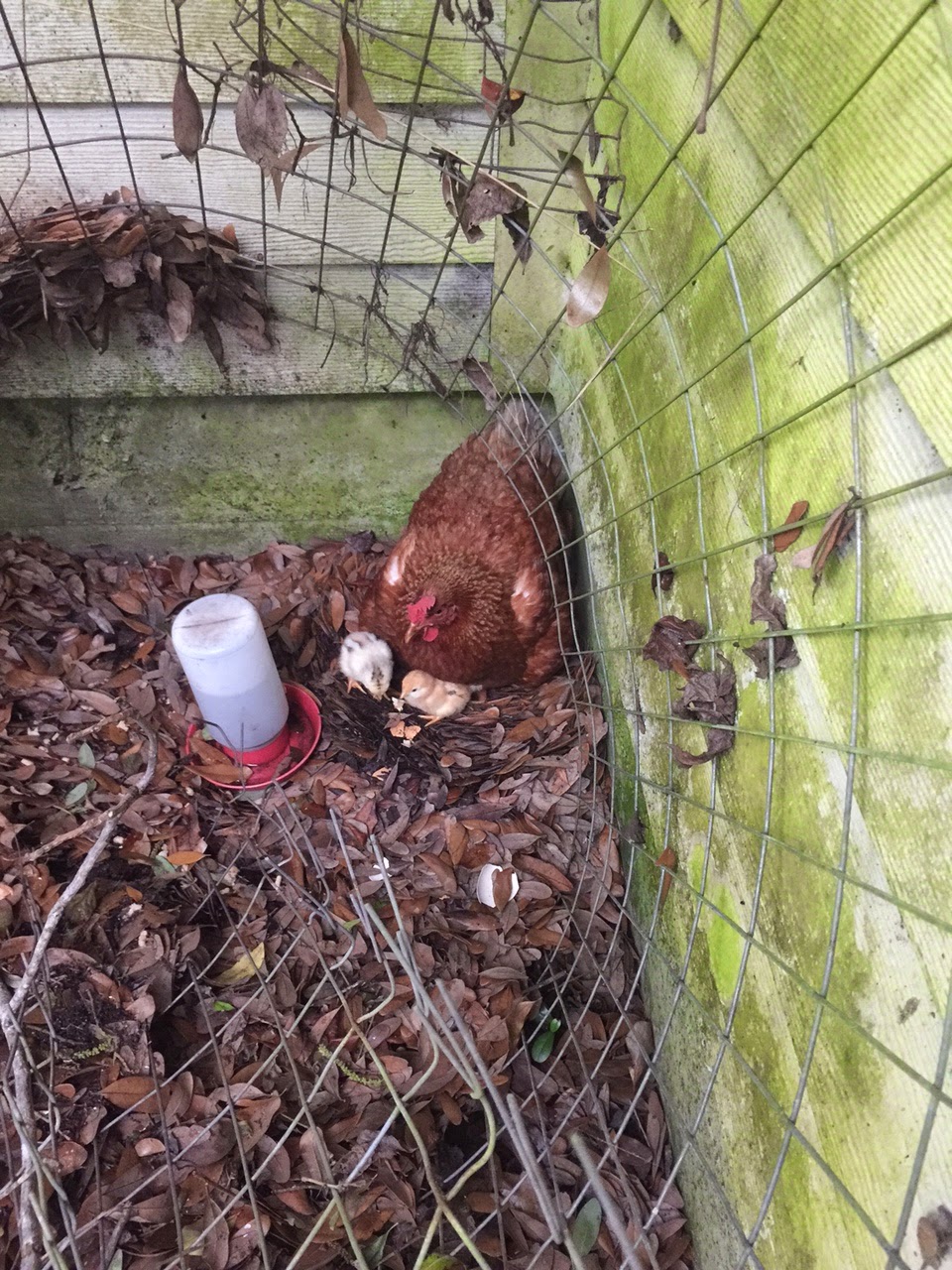 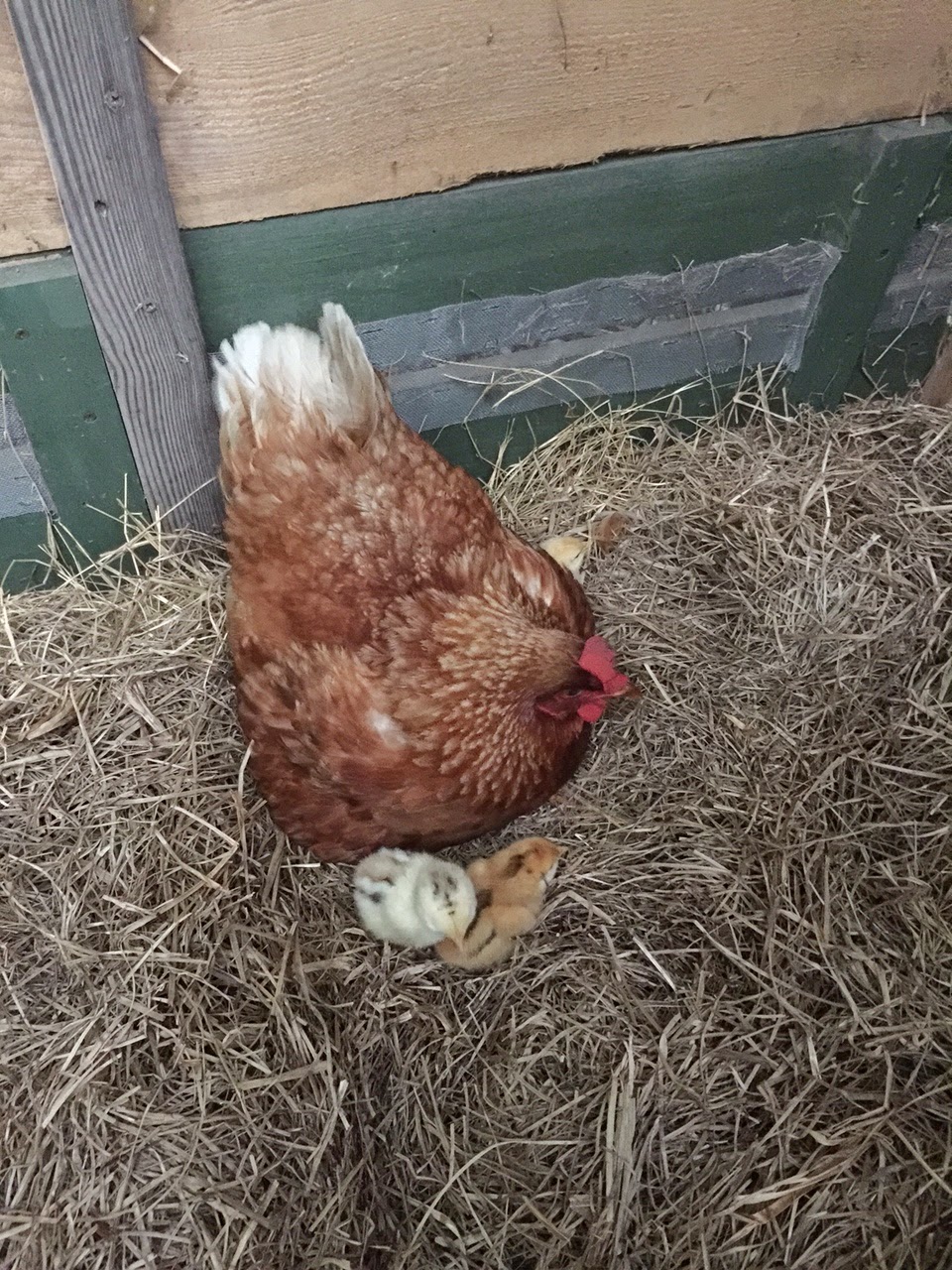 There are three babies and at least eight more eggs which I personally do not think are going to hatch. Those chicks are not newly hatched and I'd say they're at least a couple of days old but we put the eggs in there anyway and Mama clucked and gathered her babies around her and the whole thing didn't take two minutes. So maybe they won't be too traumatized. One of the eggs had a hole in it where the chick had tried to peck her way out and hadn't made it and it smelled rotten which was drawing critters, I'm sure. We left that one behind.

Nature is cruel but nature is wise and I hope we've done the right thing. I think we've done the only thing, truthfully, in that it was inevitably only a matter of time before one of those cats got in there and slaughtered the bunch of them if a raccoon or possum didn't get to them first. Those babies are the cutest, softest things in the world, each of them weighing about as much as a feather, and they look very sturdy for all their light softness. I've seen all of them peck about for food. And their mother will teach them what they need to know.

And so here it is, a rainy, thunder-rumbly Saturday and I'm glad I got that squash planted yesterday and I'm glad the chickens are safe and I'm glad that we had such a good time with Lon and Lis last night. The supper was delicious, the martinis more so, and the berry pavlova was...almost entirely eaten. Tonight Mr. Moon and I will spiff our own selves up a bit and attend the show at the Opera House where Lon and Lis will be playing their second gig of the day.

A few minutes ago my phone made an alarm sound and the text message with it said only, "Take shelter immediately." The rain has almost died down and I didn't hear any wind but I went and told Mr. Moon who is taking a catnap in his chair.
"It said to take shelter immediately," I told him.
"And that's what we've done," he said, and closed his eyes again.
I did just hear what sounded like a train but it wasn't a tornado. It was indeed a train.
Which has now passed leaving nothing but the sound of very gently falling rain and the frogs back in the swamp have a good croaky concert.

A nice morning and those damn cats are going to have to work harder for their lunch then they had planned on.

I hope all is well in your world.