Tallahassee got some massively crazy weather today. Trees down everywhere, roads blocked, branches twisted and snapped off. Literally snapped.
There must have been some little twisters in that storm. On my drive to town I saw much of the same a few miles down the road and feel quite lucky that those nasty little devil winds did not visit me. The power was out when I left and when I got home three hours later it was still off. I had just texted my across-the-street neighbor to ask he had any clue as to when it was supposed to come back on and right after I sent it, it did.
I felt as if I had magical powers!

But everyone here seems to have survived the storm although I got half the number of eggs today that I usually get. 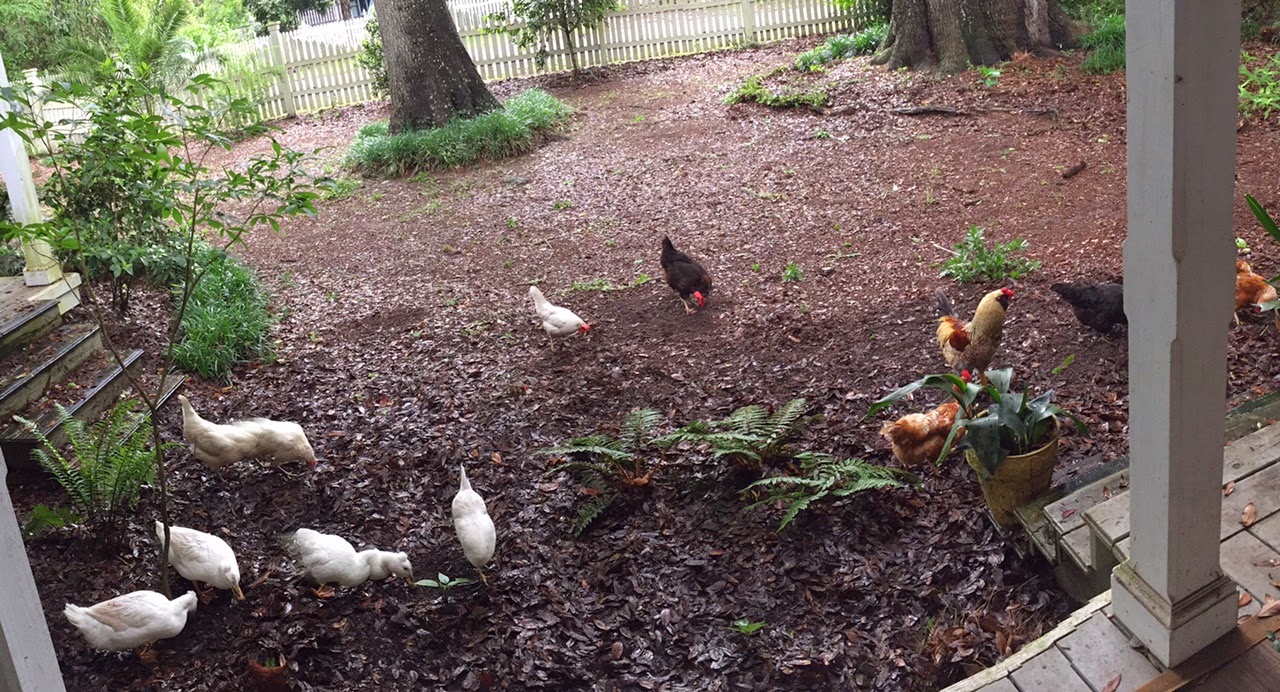 There are most of the birds, but not all. They were scratching in front of the little side porch and I took a panoramic picture of them and it sort of makes me dizzy to look at. I can't keep that little arrow on the line to save my life.

Maurice is definitely fine. She has been following me around. Mr. Moon left for auction but not before he petted her and talked baby-talk to her. He kills me. "Oh, my little kitty. She doesn't want to sleep with Daddy anymore? She always sleeps with Mommy?"
Of course I talk to her like that but, well...
"You love that cat," I told him.
"No," he said. "I don't like her."
I laughed and laughed and Maurice just let him scratch her under the chin. She knows the truth of it, as do I. And the truth of the matter is, she stays on my side of the bed because she knows I need her there. That little solid chunk of warmth that I can reach down and scratch a bit when the dreams get to be too crazy.
Last night I dreamed that Bill and Hil came over to my house for supper. It was not this house. No, no. It was the house with the Titanic ghosts in the basement and it was huge and filled with antiques and also filled with partying strangers. I asked the Clintons what they would like to drink and he said that he'd love a vodka tonic and she said that an orange juice would be nice. On my way to get their drinks, I kept trying to round up the partying strangers to make them leave. Most of them did, grumbling as they went, but a few very rough-looking specimens refused. May was making dinner which was a good thing because she is so good at vegetarian cooking and I know that the former president is eating a vegan, no-fat diet these days. But somehow, between the rounding-up of the unwanted people in my house and checking on the kitchen and all of it, I couldn't even get the drinks made or delivered and I felt so very, very anxious and rude and bad and once again I thought, "Jesus. This is just like my dreams." And then even, "God. This IS a dream. I need to wake up!"
And eventually I did and you better believe I needed Maurice to pet for a moment.

Since Mr. Moon left with his popcorn and his coffee drink and his snack bag to go to Orlando I have taken the trash and because the moon must be in some Suzy Homemaker mode I mopped the kitchen and two bathrooms. I also picked up some fallen branches and picked some kale for a salad tonight. The kale still has not gone to seed but some insect critter is turning the leaves to lace. While I'm waiting for the floors to dry (and this may not happen tonight- the humidity has to be at least 80% here), I am writing this and also went and took a few pictures both in my yard and down the road which by the way, looks like this tonight. 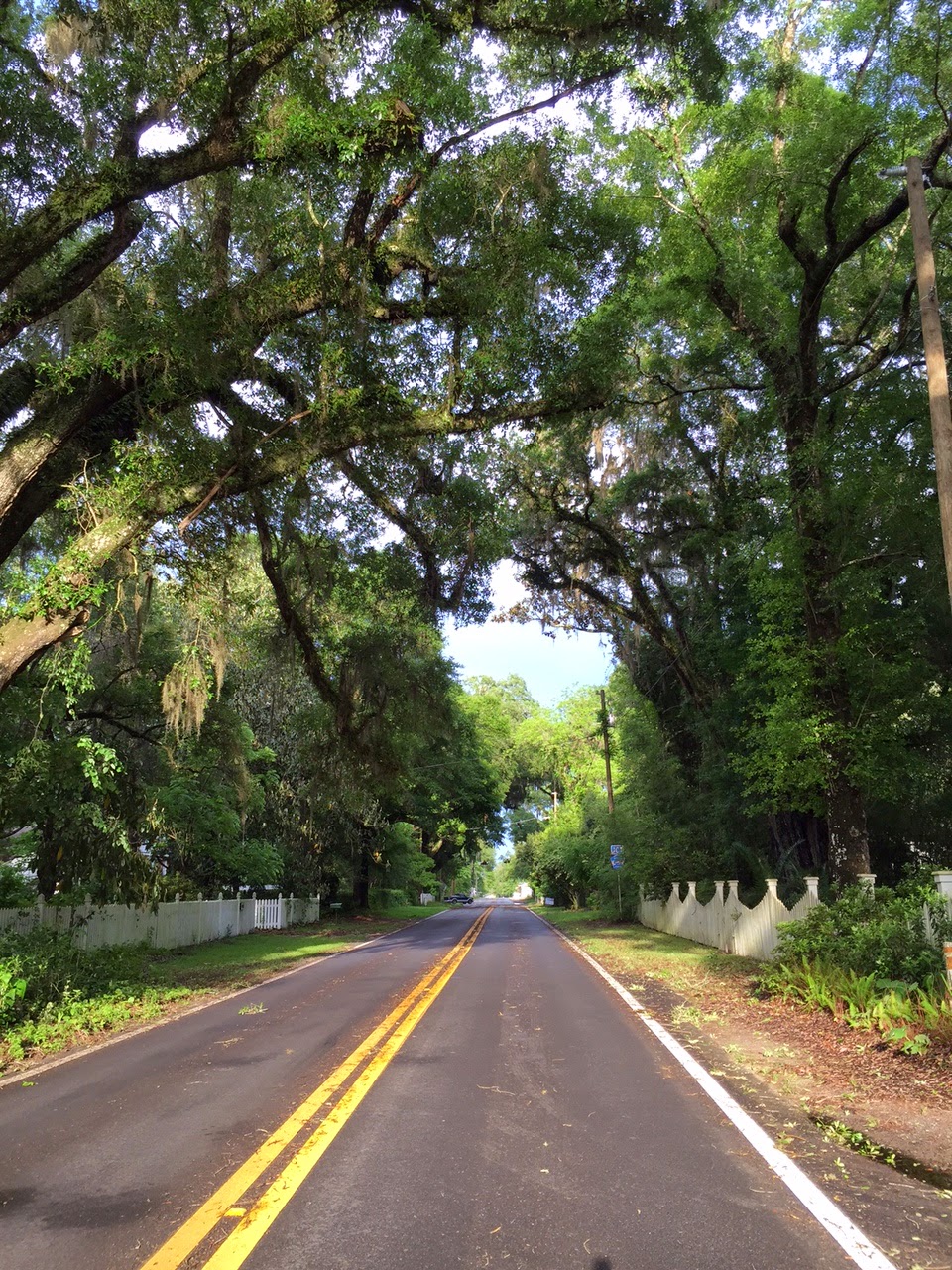 Here are my Susan Suchan Day Lilies. Susan was my dear friend who died in 1995 and she had been pleading with me to take some of her lilies and I finally did after she took off to that other plane. I have transplanted them in three yards now. 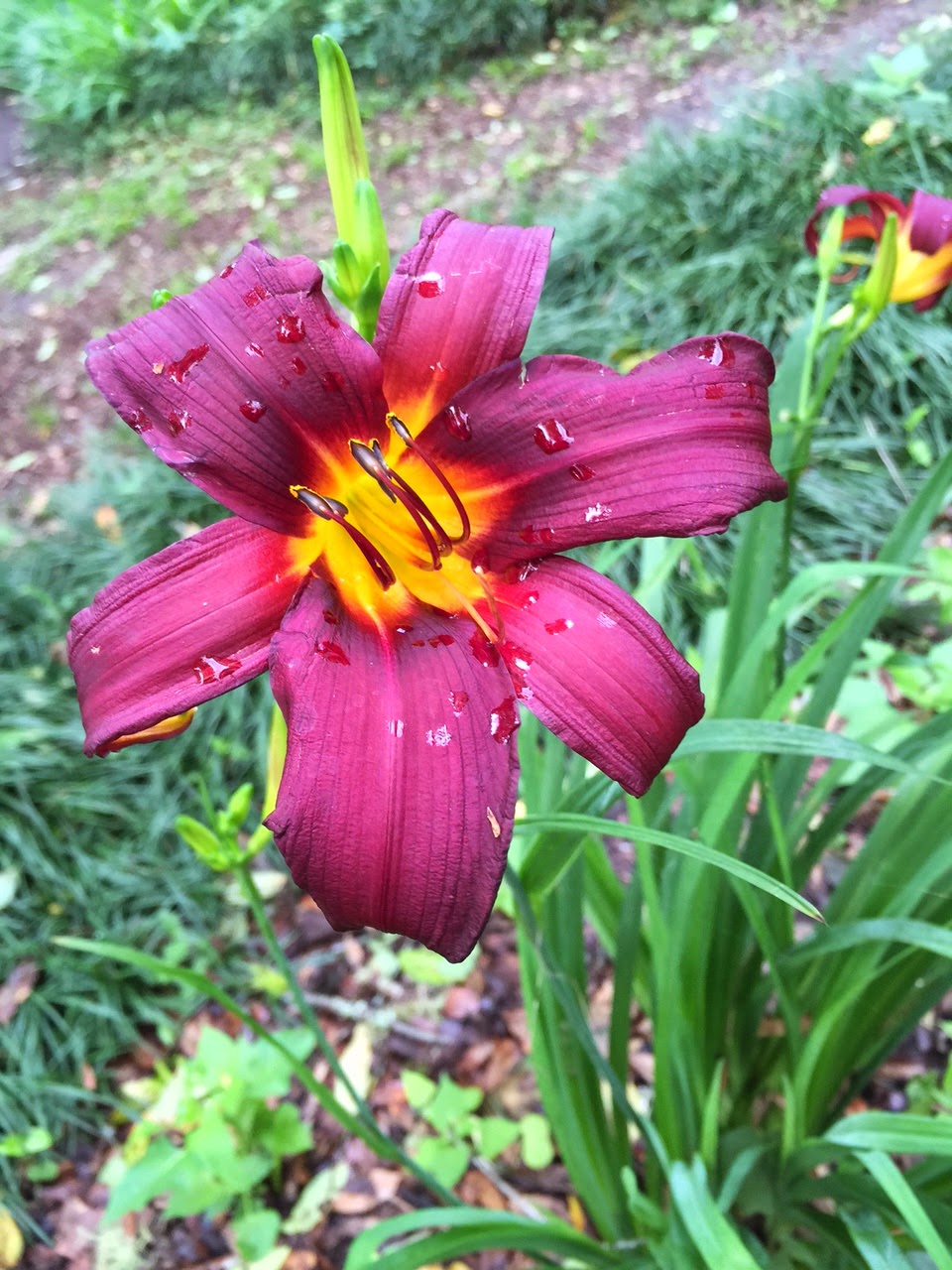 It always feels like a blessing when they bloom. They are beautiful but not nearly as beautiful as my Sue-Sue was.

My neighbor's magnolia grandiflora has begun to bloom and I want with all my heart to pluck one of the buds and bring it home to a vase to let it open in my hallway to fill the air with the sweet scent of it but I am not that sort of neighbor. I did take a picture though, of an open blossom. 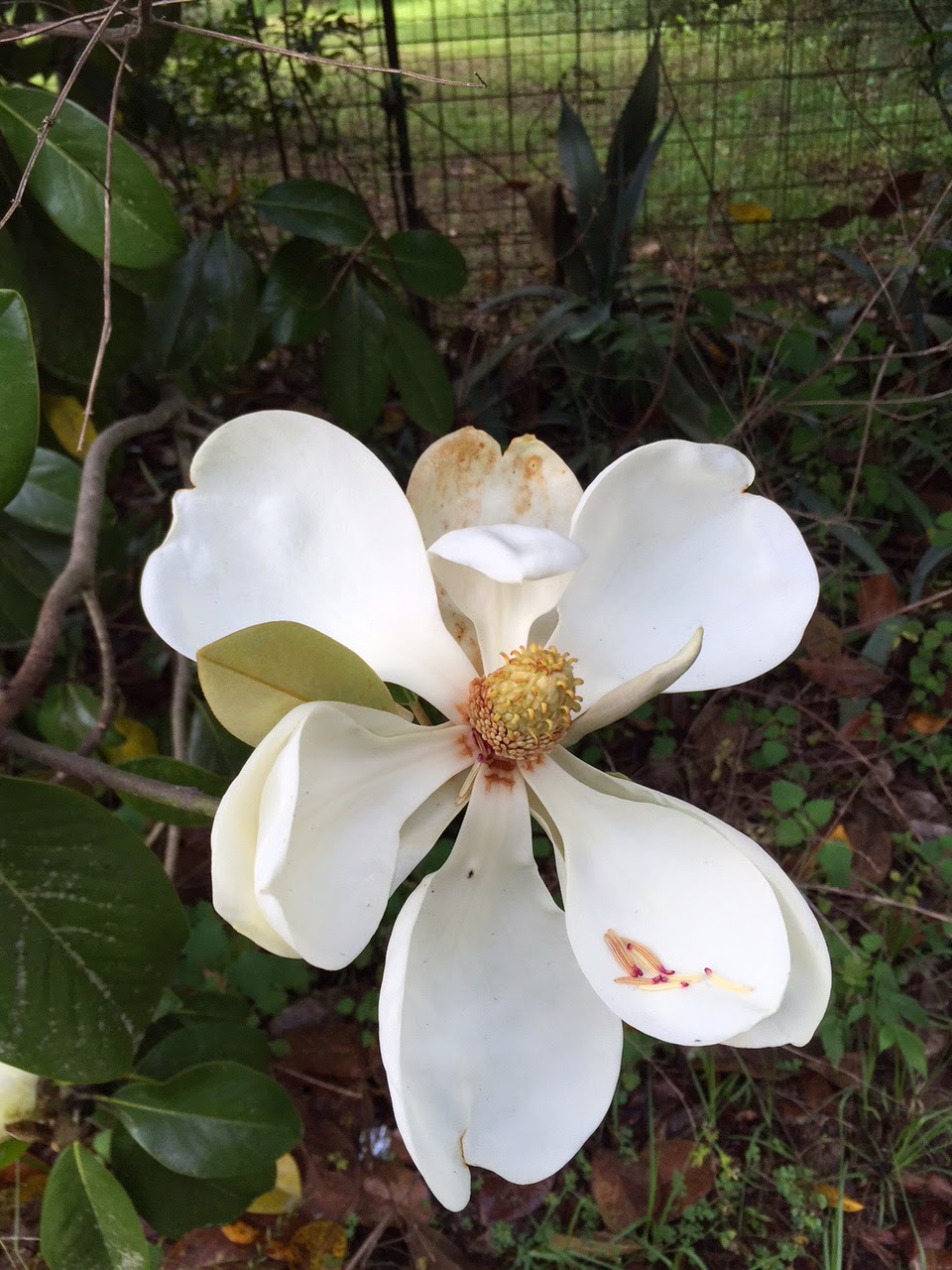 And then because this pretty jenny was out where I could take her picture, I did. 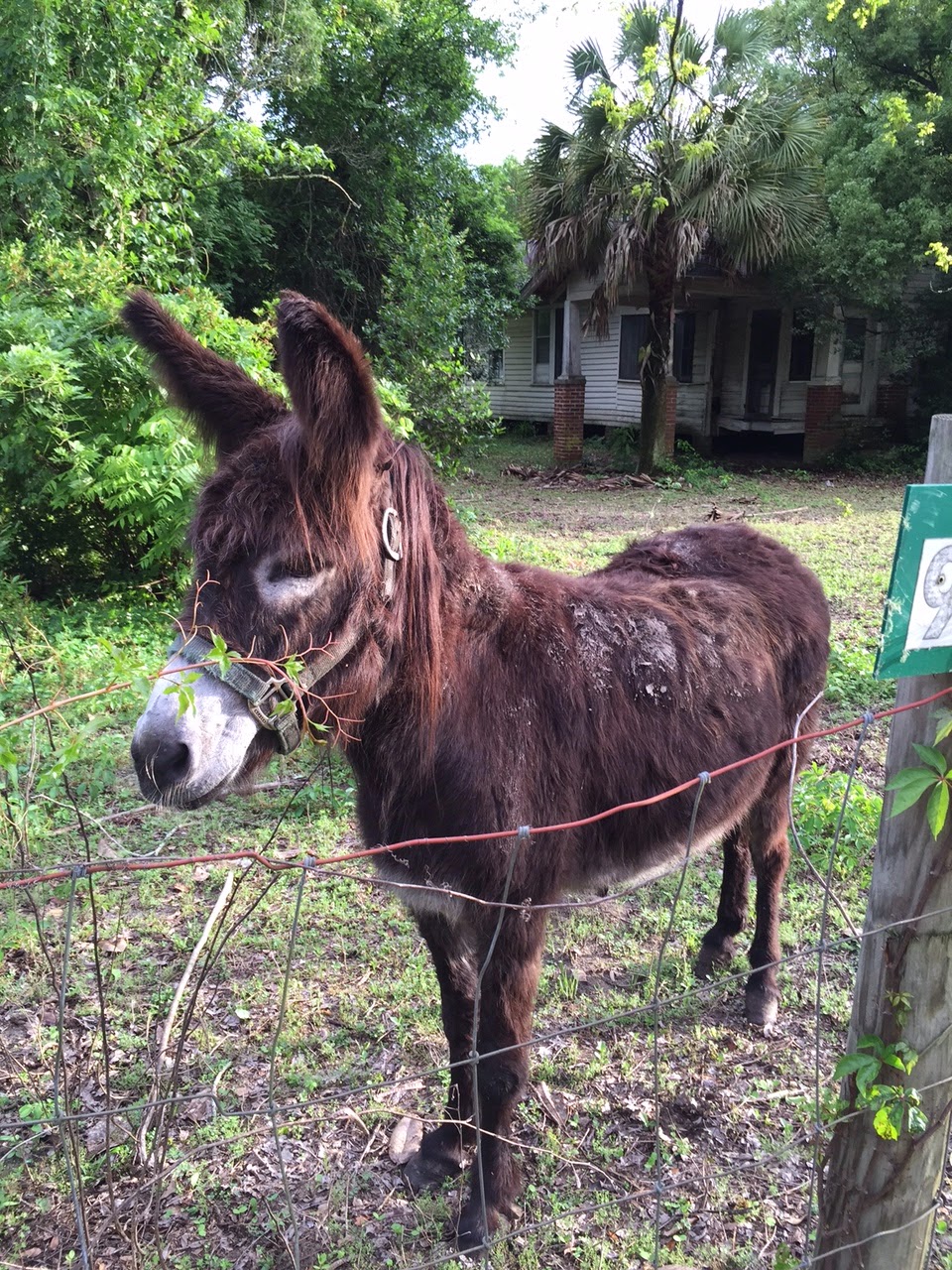 This donkey belongs to my next-door neighbors and I swear- if I ever get another animal for a pet, it will be a donkey. There is something about them which calls to me like chickens do.
But I probably never will. Although there are such things as miniature donkeys... 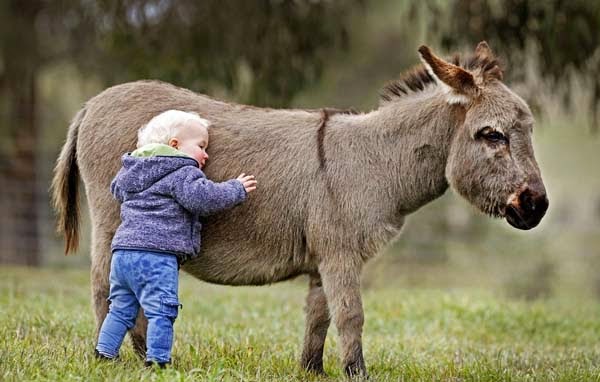 How much would Owen and Gibson and Soon-To-Come-Baby love one of these?

I think I'm going to go massage the kale. I am craving something oily and vinegary. I picked a few pea pods to add to the salad and a few collard leaves. No, I have not pulled all of the collards yet. It would still feel like murder. And one of my last carrots, burgundy and gold. And some shallots. 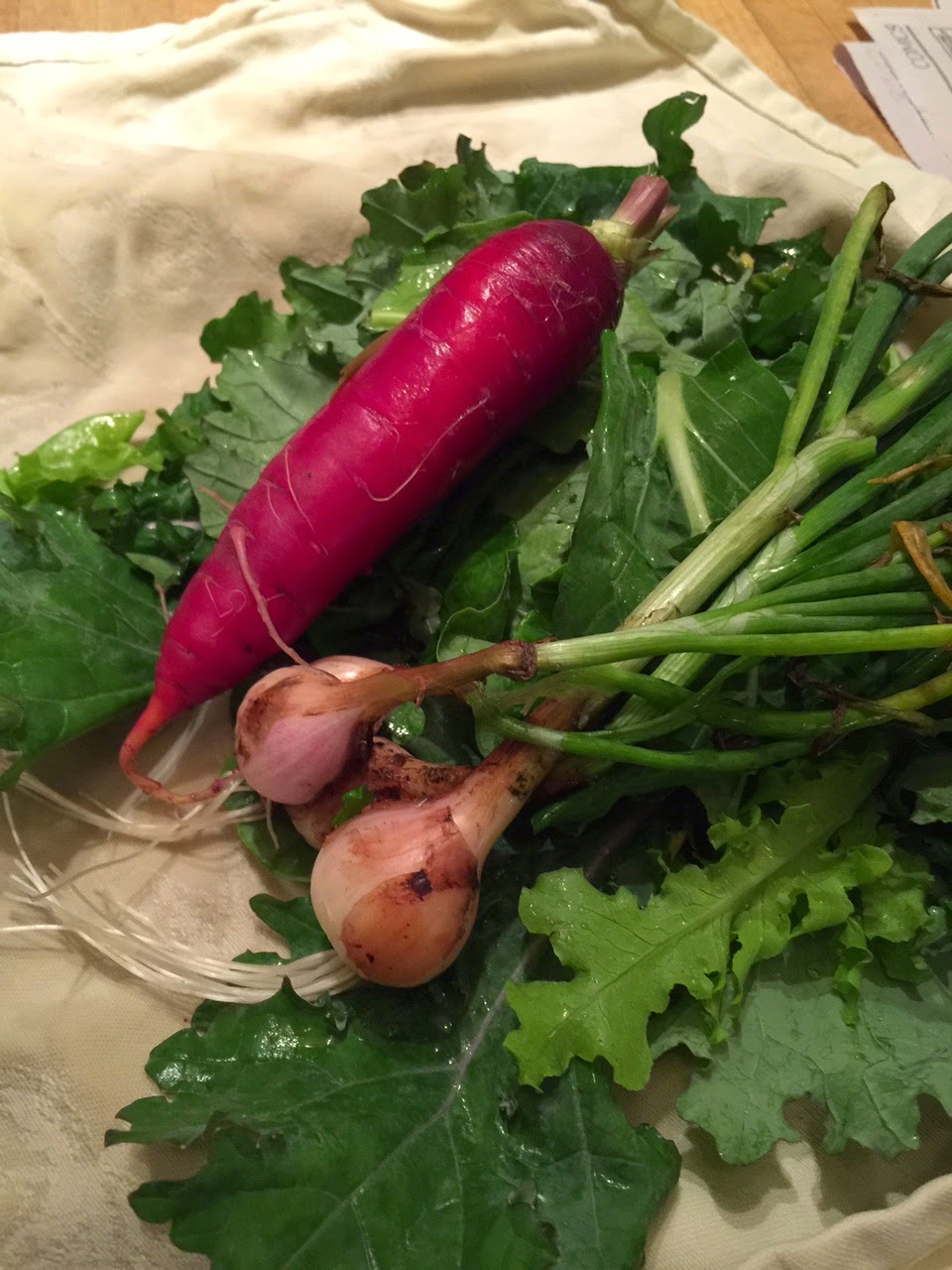 Garlic and basil will be involved.

Please don't hate me because my life is so exciting.