Woke up this morning with that Sunday feeling. That flat, gray, fuck-all of a feeling and I have no idea why.
The weather is abysmal in my opinion. It's going to get down into the 20's tonight and the next six nights, too, according to the weather widget and that is just too cold for me. I know, I know! Some of you are experiencing temperatures down into the minuses but I live in Florida for a reason and the reason is not that we have such interesting people here, especially when they do bath salts.
Yep, Florida Man, talking about YOU!
Anyway, I covered up all the plants still left on the porch but I have serious doubts that they'll survive almost a week of below-freezing temperatures. I guess we'll see if arugula can survive it and lettuce and collards and mustards, too. I'm pretty sure the collards can, not sure about the rest.
Jessie invited us over tonight to have supper and watch a movie with them and with Lily and her children and I was going to go and I cooked stuff- a pot of New Year's Day Luck of black-eyed peas and rice and greens and also two loaves of bread. But when it came down to it, I just couldn't bring myself to leave the house and so I didn't, which is unusual for me when it comes to family occasions. But Mr. Moon went and took the food so I am represented, so to speak.
We need to leave all of the faucets and garden sprinklers dripping tonight or we'll lose water pipes. Mr. Moon just finished fixing one that broke somehow, some time, and we don't know when. I've got my heater set on 62 and it hasn't stopped running all day.

Let's see. What else can I complain about?

I can't really think of anything. I have had a very, very good time sitting on the couch and embroidering overalls for August and watching Call The Midwife. I mean, honestly- I couldn't be much happier than playing with needle and thread and color and stitches while watching that show. 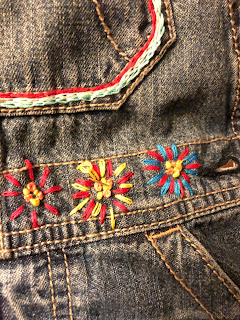 Jessie told me to go ahead and embroider whatever I wanted and not to worry about anything being too "girly." August is going to get the reputation of being a hippie at the library baby group but he's man enough to handle it. Jessie said she's tired of bats and balls and dinosaurs and cars, which are the only thing that most boy clothes are decorated with. Oh yeah, monsters too.

And I guess that's just about all I have to say on any subject. Keep your pipes running, make soup, eat it, don't get frostbite or whatever it is you Yankee people get. Chilblains? What's up with that?

A year ago right now I was drinking rum and looking at this: 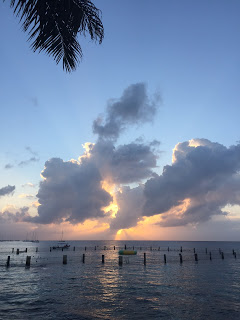 My favorite quote from the post was: "We went to town and got our supper on the square and it took forever and ever and finally the waiter told us that there was only one chef today and that he was drinking tequila."

I remember that so well.