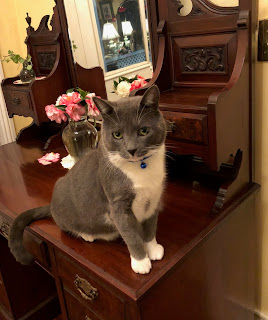 I got a text from Jessie this morning asking if I wanted to go to Levon's two-month check-up with her today and of course I did. As much as I hate going to the doctor I love going to the well-baby checks because I love to hear the nurses and doctor praise the child's growth and overall health and well being as much as the mama does. Plus, when the doctor says, "Looks like you're doing a great job!" I can say, "Yes! She is!"
August went with us and I can't believe this but I did not get one picture of that boy. I got some of his brother (and everyone of them is blurry) but none of August. I kept trying but he kept disappearing as soon as I held the phone up to snap one.
I kept him mostly entertained while Levon was fussed over and examined and that was fine with August. Levon has gained four pounds and four ounces in the two months of his life. He is so very responsive and when you talk to him he grins and talks back and he chuckles in that baby way which is indescribable and one of the loveliest sounds on earth. 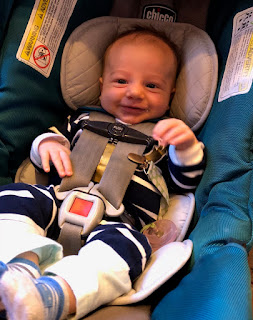 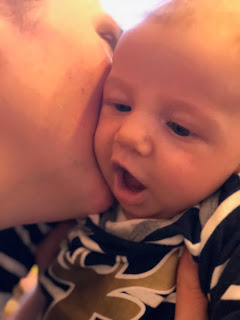 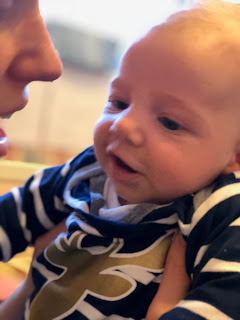 His mama is his world and he is certainly a huge part of hers. She sent me a little video the other day of Levon laughing at the breast and I'd love to share it but modesty must be preserved. It is the sweetest thing.
He has rolled over three times now, once on the bed.

As I have mentioned before, the doctor who sees my grandchildren is the very definition of laid-back and he's the one who will make a house-call after a homebirth to do the initial doctor check. When he'd finished his exam and asked Jessie his questions and asked her if she had any concerns, he said, "Well. Shall we talk about immunizations?"
And then they discussed them and which ones Levon could be most safely given and which ones Jessie wants to delay. He is fine with all of this and assured her that today's shots had no live-virus and no mercury in them. August and I stepped out of the room when Levon got the actual jabs but I could hear him cry out in surprise and in pain although his wails only lasted for a second and then Jessie nursed him for awhile and because he was already tired, he fell asleep in his car seat and off we went, to go to lunch. Of course.

While we were at lunch, I said something to Jessie and called her "Jess" and August said, "Jessie!" Jessie said, "Yes, that's Mama's name. We've been talking about that."
And then the boy said, "Vergil!"
And we agreed that yes, Vergil was his daddy's name.
"Do you know what Mer's name is, August?" I asked.
He got a thoughtful puzzled look on his face and then he said, "Pretty?"
Oh my god.
I could have died right there in the Bamboo House, falling face-first into my noodles and been as happy as I could be.
How I love children.

Moving on, here we have a picture of what Mr. Moon got done last night in his bathroom. 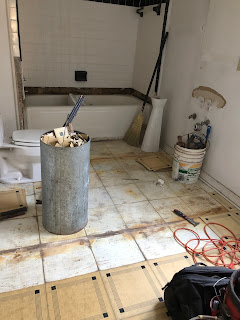 And I took this one of him this afternoon. 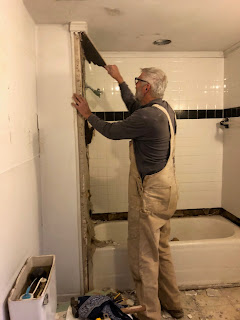 It does come in handy to be tall. He's getting it done and he's tired tonight but happy.

Speaking of happy, the chickens have been so peaceful today and I have to say that the yard just has a completely different feeling to it. Peace, yes, and a far more casual and slowed down vibe. No constant rooster crowing as one rooster tries to sound bigger and tougher than the other. No screams of panic as the hens scatter, running from one sex-crazed bird or another. No constant flapping of wings in display or hens flying up to a fence to try and escape a male.
Just...peace.
Lucy is still with us and I am hoping for the best.

I got two lovely eggs today and I am thinking that as things calm down even more, the hens will be more generous. 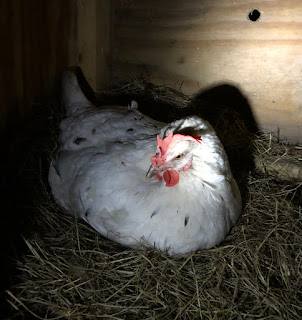 Peace to all and I am holding Dr. King closely in my heart today, remembering the horror and sadness I felt when he died, the gratefulness I have that he lived in my lifetime.
He was and always will be a personal hero of  mine and example of how we should never, ever be afraid to speak the truth, to do everything within our power to further the causes of equality and civil rights, to never give up on the dreams which represent the very best of all human desire for all of our children to know freedom from fear, and the love of fellow humans which should be given abundantly and freely to all of the babies.
ALL of the babies.
Dr. King had a dream and I wish he could know that despite everything, there are so many of us who try every day to keep it alive. To further it along. It is a damn slow process which is frustrating and these days it seems as if the process has not only stalled, but gone back in time. I have faith, though, that it will continue, no matter what, if for no other reason than this- it has to.