I remembered what it was I was going to say this morning and it was that Mr. Moon and I watched the first of the new David Letterman interviews on the Netflix series, "My Next Guest Needs No Introduction."
The guest was Barack Obama and it was like a breath of hopeful fresh air to see him, hear him. There was quite a bit of John Lewis in there and overall, we just enjoyed it so much. Letterman is obviously not as interested in the promotion of movies by stars as he used to be. He seems a different man but he sure does love Obama. He kept saying, "Mr. President, I know you need to get back to the Oval Office but..."
Anyway, I recommend that interview, at least. The rest may be pure crap but then again, they might not be.

Jessie and her boys met me at the Goodwill today and we actually spent over an hour in there. Maybe two. August was unbelievably good, sitting in my cart and talking to me and playing with a few toys we picked up from the shelves and looking at a few books. Levon slept for most of the time and Jessie found some really cute clothes.
I didn't.
Nor did I find any overalls. Here's what I bought:
1. An Elmo toy for August which plays a lullaby and says, "Good night." This is the sort of toy somewhat frowned upon by August's parents which of course means he loves it with all of his heart.
2. An I Spy book for August.
3. A leopard print with pink trim jacket for Maggie. It is so soft.
4. A butterfly scarf for me that I'll probably never wear but it'll look nice hanging in a window or something.

That was that. Then, because it was almost three o'clock, we went and got food. Cuban food. It was delicious. Here's August, eating some black beans and rice. 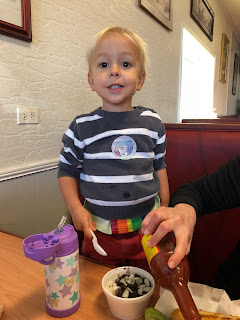 And then we all said good-bye and Jessie took her boys home and I went to the Gee Dee grocery store AGAIN. I wish I knew why it seems that I need to go to the store every freaking day lately. This is not something I truly want to do. Plus, I have so much stuff in my cabinets that need eating up that I shouldn't be going at all. We should be eating beans and ketchup and pasta and rice and quinoa and pickles.
That's a balanced diet, right? 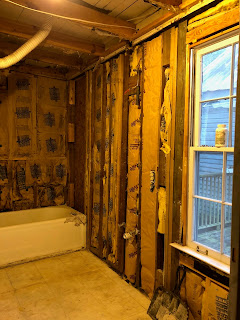 He's down to the studs.
I'm amazed and impressed and truly proud and I'd like to say that on "Fixer Upper" when Joanna leaves whatever house they're working on and Chip stays behind with a sledgehammer and some power tools, saying, "I'm psyched! I love demo day!" and in the next scene you see the house with walls down, beams replaced, and entire kitchens stripped down to the walls, it's just a tad misleading. Chip Gaines must have a crew of fifty. Whom you never see.
Which is fine. It's TV but that is not how it goes in reality. Unless Chip Gaines is actually Super Man beneath that goofy dad exterior. 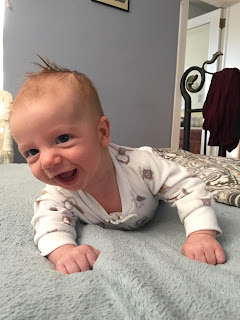 Excuse me but that is, at this moment, the cutest child on earth.
Sorry but that's the way it is. He talked to me today. He had things to say and I listened. It was awesome.

That's it. Gonna get bitter cold tonight for those of us who live in the balmier climes.
Twenty-two degrees Fahrenheit.
Oh my god. I just spelled Fahrenheit on the first go. I'm gobsmacked.