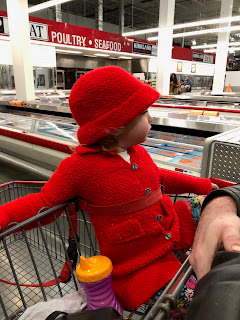 We had a large group of us at the Costco today. Rachel wanted to come and Lily and Jason both came with Ms. Magnolia whom you can see here wearing what I like to think of as her Brit Mod coat and hat ensemble which my mother made for Jessie when she was a little munchkin. Maggie looks adorable in it.

Jessie brought Levon and August too and so it was a cousin, auntie, sort-of-auntie, uncle, mama, daddy, MerMer event. I wish I'd gotten a picture of Rachel. She's just had her hair colored the loveliest shade of purple and it suits her so well. We love Rachel to pieces. All of us do.

Here are Jessie and her boys. 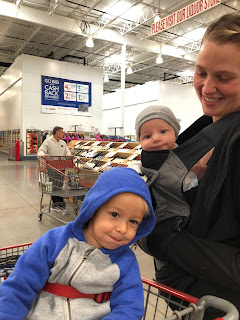 August was in super high spirits and entertained himself for a good long while by pretending to sneeze as loudly as he could. There was hardly anybody else there today and I suppose that Costco is able to run the data involving temperature, day of the week, day of the month, other weather conditions, flu levels in the population as reported by the hospitals, etc., etc. in order to decide when sampling would be most effective and today wasn't it.
Maggie and August were extremely disappointed in that there were no treats at all until we got to the end of the store where they sell crackers and cookies and energy bars. A woman was sampling brownie brittle and another woman was sampling Annie's gummy bears.
Finally- TREATS!

So that was our big outing and then Lily and her crew and Rachel decided to go get Indian buffet and first I said, no, I wasn't going to go and then I said, oh hell, why not?
While we were there, we got a text from Jessie with this picture. 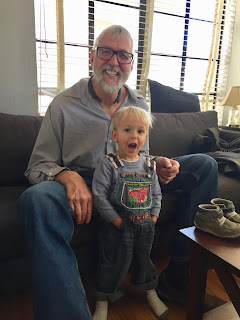 Boppy had taken his Mer-maid lunch over to Jessie's to eat there and see the boys. I had finally handed over the overalls although I could have spent months embroidering more and more and more...but August wanted them and so there he is, wearing them.
I am bereft. I have nothing else to embroider on now which means that I have no excuse to sit on the couch and watch TV.

Rachel and I went into the Goodwill bookstore and shopped around a bit. I got an Armistead Maupin book which I think I've already read and an Anthony Boudain which I know I haven't read and also, a very old copy of The Five Little Peppers Abroad for Rachel to give Hank. When I was a little girl I loved The Five Little Peppers and How They Grew and my two oldest children loved it too. I don't believe I ever read about their adventures abroad but I am sure it's charming as hell. As I said to Rachel when we were looking at the vintage books, I have no idea why it was such a pervasive theme in children's literature back in the olden days to have one or both parents die, leaving children to fend for themselves in the cruel, cruel world.
But it was. Perhaps the reality of the time?
And honey, kids didn't go to therapy in those days, neither the ones who had lost their parents or those of us who read the books and sobbed our eyes out.
Heidi, anyone? The Little Princess?
And then of course there were the books about animals which were propaganda for the anti-cruelty for animals movement like Beautiful Joe and Black Beauty.
God. It's a fucking wonder any of us survived intact, especially considering that no one had gotten around to decruelalizing Grimm's fairytales or cleaning up the blatant racism of Little Black Sambo and Rudyard Kipling's books and Uncle Remus and my favorite, Doctor Doolittle.
And yet, we did and some of us have fairly healthy outlooks on life and are not racists but I'm not sure why.

We're going to get more temps in the twenties tonight but then it's going to start warming up a little bit. 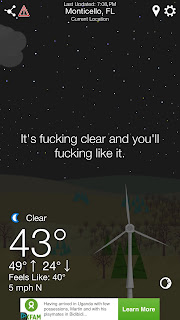 I've got a venison roast in a slow, slow oven, cooking it the old fashioned way and it's nestled in between potatoes and carrots and onions and green beans. All of my current chickens are in the nest although I had to look around a bit to find little Miss Violet. She was almost hidden, cuddled in a nest of straw where they sometimes lay, on the floor next to the door. I have to take them warm water in the mornings because the water in their waterers is frozen but they seem to be handling it all quite well.

Owen and Gibson are spending the night tomorrow and I am glad of that. I have not seen them nearly enough lately. There is only so much MerMer to go around and quite frankly, MerMer needs at least a bit of time to herself which has been in short supply but we'll have fun with those boys. I have pizzas and sherbet and perhaps they will want to take a warm, cozy bath in Mer's big tub before they go to sleep tomorrow night. I have bacon, and I have sweet potatoes to cook to make pancakes with.
Soon, August must come and spend the night. It's way past time and I think he'll do fine. He knows and loves his Bop and Mer and will probably feel quite at home here.
And Maggie. Oh, my Maggie. Remember when she spent the night and I was trying to get her to sleep and she said in the most piteous and precious tones, "But where's my passie?" meaning her pacifier and I felt as if I had failed at the most basic task of all but I found it for her and all was well?
Sometimes don't you wish you, too, had a passie?
I do.