It's All So Thrilling!

I am so tired tonight. I came home from town after the snow had melted and I'd been to Costco with two daughters and five grandchildren and then we all had Indian buffet and I was going to take a nap but instead I did some chores, thinking I'd get a second wind but I'm still waiting.
I do not think it's going to happen.

It was a day of Fabulous Wonderment, watching actual snow fall, big fat flakes of it, even if it didn't last for long, either in coming down or in sticking around. Owen kept saying, "Mer! It snowed in Florida!" He and Gibson were still a bit delirious from the joy of it. 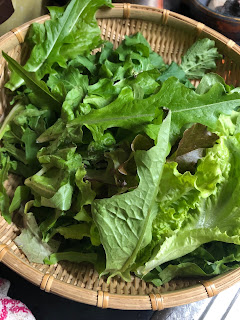 It would appear that the lettuces and arugula and indeed, all of the winter garden are surviving nicely. There's my salad greens for tonight. Mr. Moon is going to a basketball game in town and is at Jessie's right now having supper with her family. He sent me a very short video of August playing a song.
Wait 'til the end for the big finale. It's impressive.


Today when we were at lunch, I sat at the table with August and Levon as Jessie got food for her and August and as we sat, August gravely advised me, "Mer. Patient. Food coming."
Oh, little wise one.

I will be patient and wait out this cold snap. Supposed to get down to 27 tonight. I'm a little terrified in that our gas tank seems to have some sort of leak and we're getting really, really low on gas which is how we heat. I know I won't die. Not only do we have space heaters but we could stay with one of the kids or even get a hotel room. Still. It doesn't take much to terrify me. The guy who works on tanks is supposed to come out tomorrow and the guy who delivers gas is supposed to be out...sometime.
I got the WTForecast weather app on the advice of Sarah (a commenter) and Lily. At least it introduces some humor into the situation. 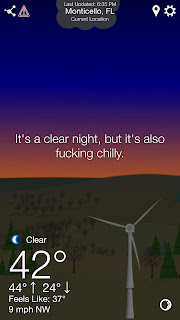 I hear that Tallahassee's been all over the news, from Canada on down, due to our freaky snow. A friend in Maryland texted me to ask if we were okay. I said that yes, we were fine. It was only so dramatic because we're in Florida. She said, "The Weather Channel can only speak in bold caps."
I guess it's not easy making 24-hour news out of the weather and you have to make it all as thrilling as you possibly can.

But yes, we are fine. We're all joking about it here.
One headline on FB reads, "Relive all nine terrifying minutes of the great Tallahassee blizzard of 2018!"
This also makes me laugh. 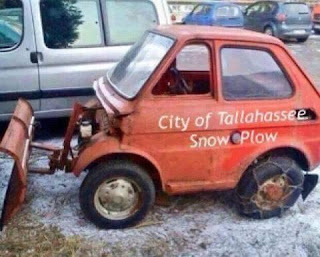 It's caption was "We will dig out of this, Tallahassee. Yes we will!"

And then, of course, there is this. 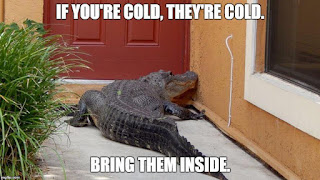 It's already starting to look like it's going to be a wild year in North Florida. Hang on to your hats, kiddies, buckle up and stay tuned right here to the GRANNY MERMER CHANNEL FOR ALL OF THE LATEST NEWS!!!! YOU JUST CAN'T LOSE IF YOU READ OUR NEWS!!!! AND THE ONLY SPIN YOU'LL FIND HERE IS IN THE FRONT-LOADING WASHING MACHINE!!!
YOU BETCHA! PICTURES AT ELEVEN! MUSICAL INTERLUDES SOMETIMES INCLUDED! NO FEE REQUIRED EVER! ALL ARE WELCOME AND NONE REFUSED!