My day zipped by in a blur. I swear.
It started out slow and easy. I stayed in bed longer than I usually do because Maurice came and got into it with me, which she never, ever does any more. She cuddled up and wanted petting and scratching and I sleepily followed her instructions and then she settled down in the crook of my arm and laid a paw, most tenderly, upon it. No biting, no scratching. Just sweetness.
I basked in the experience. I love this insane cat who has an interesting, to say the least, approach to love.

As I started my walk I noticed two ladies and a man walking across the street and somehow I knew they were people who were interested in the history of Lloyd. We get these folks sometimes. And sure enough, they were, and asked me a few questions which I answered to the best of my ability and I ended up walking them around my property and pointed out where the little Episcopal chapel used to be in what is now my driveway which thrilled them to pieces. The ladies were retired school teachers and chatty, the man not so much. One of the ladies has been researching Walter Lloyd Bond, the man who built this house in 1859 and she said that his father was an Irish revolutionary who was imprisoned but his mother was allowed to come here, which she did, and I am not sure how she and her children ended up in Lloyd but they did.

So there was that and then I went on my walk and two little Boston bull terriers who have been running out of their trailer and barking at me as if they wanted to kill me for threatening the junk pile behind their domicile did that again today and it pissed me off. It's the most beautiful, peaceful little dirt road and I've been walking there for years and why they've suddenly decided that I am the enemy, I do not know.

I went to Publix, I got everything on my list but damn if I didn't forget the sweet and sour sauce I need for tomorrow's egg rolls. This is how it goes these days- I'm in the produce section and by the time I pass the International section which is about three aisles over, I've completely forgotten that I was going to get something there. My short term memory is about shot. This morning I got a glass of water out to take my pills and supplements, noticed that I needed to put something back into the refrigerator, and by the time I'd done that, I'd completely forgotten to take the pills. This all happened in about two square feet of space.

Anyway, Owen had a chorus performance this evening. There was a book fair first and we went to that and then the kids wanted to play on the play ground until it was time for the singing to begin. 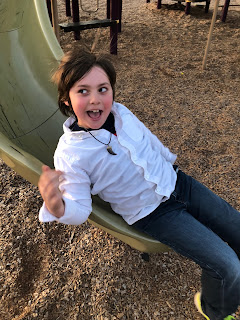 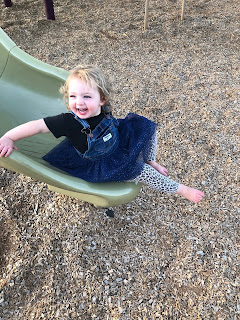 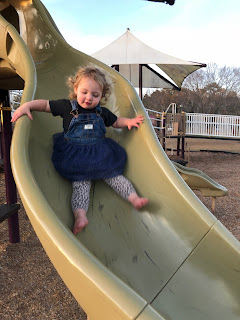 Magnolia June is fearless. She climbed and slid and did it all again. And again.
And Owen was happy too. Is it just me or is that kid getting really handsome?
You may note he's wearing his bear claw necklace that his Boppy made him.

Some of you may remember that Owen hates being in front of an audience. He hates it and abhors it and suffers it with great and horrible pain. Here's what he looked like when he was supposedly singing. 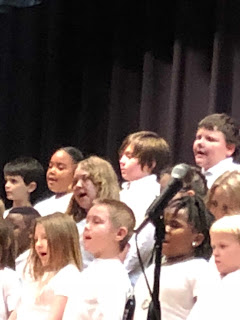 Before the concert started, Gibson said, "Owen's not going to sing. You can trust me on that."
And he did not. He barely moved his lips and when there were hand and arm movements to go with the singing, he didn't even pretend.
Let's just say that this sort of thing is not a positive experience for our boy.
He managed to get through it without puking and Lily said, "Owen, if you don't start singing at these things, we're going to quit coming," and he said, "GOOD!"
I hugged him up and said, "Well, you may not sing but you were the best-looking kid up there."
I love that boy.
Also, I would like to note that Owen's girlfriend wore a jingly belt which I can only imagine was once part of a belly dancer costume and long, shiny earrings. We mentioned that to Owen and he said, "Yeah, she likes to be fancy."
"You better tell her she looked good," his grandfather said. "You have to compliment your girlfriend."
"That's right," Jason said. "You better."
I admired her style and verve.

Tomorrow I am going back to the school to eat lunch with Gibson and then I will be reading a book to his class. I believe I will read The Little Red Hen Makes A Pizza which is one of our favorites around here. I think I'll take my own lunch as the choices in the cafeteria are going to be corn dog nuggets or the yogurt and cheese plate which sounds pretty interesting although Lily says she thinks it's like a kid yogurt and a string cheese.
Ummm. No thanks.

Life as a grandmother. It's interesting.