For Entertainment Value Only 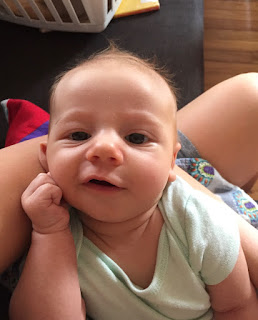 My day was filled with chores, just that, and a walk although when I got up this morning to hug my husband before he left for work I said, "I'm going to stay in bed all day."
Well, I did take quite the extended nap this afternoon but la-di-dah.
I weeded the beets and the carrots and I think they are coming along nicely. I made a sort of tabouli salad with quinoa instead of bulgur wheat and of course I did...laundry.
Always laundry, forever and ever, amen.
Right now I am washing a huge rug I keep in my bathroom along with my gardening overalls because when I was in my bathroom I noticed a dead, uh, something, with dried bloody bits and what we might call "chunks" and while I was cleaning that up, my shoes which I was still wearing from working in the dirt, left a big spot of damp blackness on the rug.
It's all just so damn never-ending, isn't it?
You can't clean one thing without soiling another.

Above you see a picture of Levon, of course. Isn't he precious? Adorable? Too cute for words? Doesn't it look like he's saying, "Fascinating! Tell me more! I'm listening"?
Yes. Yes it does. I swear I can't hold that little boy without wanting to kiss his tiny rosebud lips. Which I do. As I've said so many times before, babies can't stop you from kissing them which is part of their charm. I do it respectfully, though, I promise.

So. Let's talk about listening to audio books. Now, since I discovered the ease and joy of downloading (uploading?) audio books free from the library onto my phone, I walk about all day long with a long cord stretching from my pocket where my phone is stashed to my ear buds. Well, they're sort of ear buds. I go through books like a cold beer on a hot day and it's one of the joys of my life to be able to "read" as I go about my work and exercise. I tend to listen to books which do not require ALL of my attention because I'm always doing something else at the same time. So, a bit lighter fare, shall we say, than the books I read with my eyes, although not always.
A few weeks ago, Lily told me that she was listening to a book by Diana Gabaldon called Outlander and that she was enjoying it. Sounded decent- time travel was involved, the narrator was one of my favorites, it was set in Scotland, etc. Lovely fantasy escapism and perfect for listening to as I did everything from scrub toilets to clean and order closets. So, yes, I downloaded Outlander and it is absolutely not the most well-written book I've ever listened to or read with my eyes, but it is entertaining. It has lots of sexy sex in it, although...perhaps a bit too much and honestly- how well does ANYONE write about sex? There are only so many elements involved and after about half a dozen encounters, they've all been described rather thoroughly. Especially in White Bread World. Which this is. Also, the author seems to have a bit of a sadistic streak and loves to write about backs being whipped (not kidding) to the point where one simply has to wonder what in hell is going on there. But, in its defense, the book kept my attention (although I do tend to drift when the beatings begin) and I loved the concept of a woman who was a British field nurse finding herself in 18th century Scotland after accidentally slipping through an ancient standing stones time portal. (Note to self: If I ever decide to time travel, wear appropriate clothing to avoid being accused of being a whore.) There is a nice amount of pre-modern healing techniques and herbal use, which I do enjoy. And of course the former nurse falls in love with a gorgeous redheaded Scotsman, a warrior who is well-educated, can speak about forty-five languages, elicits absolute sexual excitement and wild monkey lust in her, and who seems to get lashed every fifty pages or so, leading one to wonder how in the world he manages to have any skin or muscle tissue left on his back at all.
Ah lah.
So I listened to the whole, long, long, LONG book and then what did I do but download the next (even longer) book in the series and now I am on the THIRD book in the series and there are five more to go.
I feel like such a literary loser.
I am listening to what is basically a never-ending historical romance novel which has S & M overtones.

Oh well. It ain't no Game of Thrones or Nancy Drew but it's...sort of like crack.

And on we go. Supper is going to be a broccoli and mushroom and chicken casserole and there are NO CANS OF CREAM OF CAMPBELL'S ANYTHING SOUP in it although I did use garlic powder. That and the quinoa salad with garden greens, tomatoes, onions, garlic, black olives, and cilantro which will negate any unhealthiness of the casserole, will be on the table soon.

"Here's your gourmet meal," I will announce to Mr. Moon and he will say, "Oh boy!" and sit down with knife and fork and we'll watch something on Netflix although it will not be Mad Men which I have now watched about six episodes of and cannot watch any more. It depresses the shit out of me. I may be a literary loser but as I told my husband a few days ago- "If this is how men really are, then just kill me now."
I find myself sickened as I watch it and ain't nobody paying me to do that.

What are you reading? And watching?

Let me know. Don't be afraid to shame me. I can take it and do deserve it.