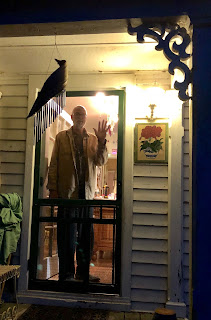 This day was so un-noteworthy that the most exciting thing I did, by far, was to make tapioca pudding.
I'm not even kidding you.
I took my first walk in about two weeks and I'm pretty excited that I am still able to do that. I wore a dress to walk in! Hell yeah! It's an old long cotton knit black dress with slits in the side and I wore it with thermal leggings and a jacket and it was so free-feeling. And comfy. I may never walk in pants again.
I may never fit into pants again but that's a different story.

I cleaned the hen house and laid fresh straw in the nests. I got an egg which was not laid by either Lucy or Violet who have been consistently laying the only eggs I get so that was sort of exciting. However, I did not get a Violet or Lucy egg so there you go.

I picked up Owen and Gibson at their bus stop as a favor to Lily. Jason had inadvertently taken Maggie's car seat to work with him. We are serious about the car seats around here. The boys were happy to see me as they always seem to be when I pick them up by surprise. Gibson yelled, "MER! ARE WE GOING TO YOUR HOUSE?"
"No, baby. Not today."
"ARE YOU GOING TO TAKE CARE OF US?"
"No baby, not today."
"AWWWWW! I'M HUNGRY!"
When we got to his house he had the option of having a piece of leftover pizza or a cupcake.
"SUGAR MAKES ME FEEL CRAZY!" he said. "AND IT MAKES MY NECK HURT AND EVEN ITCH!"
He chose pizza.
Owen chose a cupcake. And then he was going to have pizza.
Live it up, kid! Life is short.

Then I came home and ironed. I know! I know! Too exciting for one human being to handle but that's the way we roll here in Lloyd.

But let me add that Mr. Moon has been working on a new screen door for the kitchen for days and days and he finally hung it tonight. The problem has been that the door space is not a true rectangle due to what we gently call house-settling.
House-tipping might be more accurate but we don't say that.
Anyway, he had to rebuild the door and also the door frame to make it work and of course, the screen door had to be painted and it's beautiful and I am so glad to have it. There it is, up there in the picture with the hugely tall, handsome man.
So honestly, that's the most exciting thing that happened today although it wasn't something that I did.

I will however tell you that my tapioca pudding has two secret ingredients in it.
Do you want to know what they are?
Okay. I will tell you.
Coconut milk and almond extract.
Is that gourmet or what? Only about a quarter of the milk I put in was coconut and I put vanilla in it too. So it's homey and comforting and so very exotic, all at the same time!
In fact, and seriously, I am looking forward to eating some with GREAT excitement.
It's the little things, people.
At least in my life.