It's Been A Dongle Day 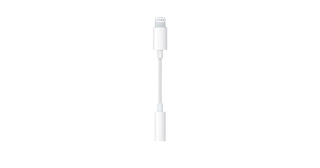 Do you know what that is?
It is a DONGLE. This particular dongle is an adapter which plugs into the power port of an iPhone so that headphones may be used with it because Apple's newest phones do not come with a headphone jack.
As you can only imagine, a headphone jack is of utmost importance to me because I have about forty-eight more Outlander books to listen to. And I don't have wireless headphones because, well, I don't. Which is probably why Apple cut the cord, so to speak, on wired headphones- so we'll all go out and buy the wireless kind.
Bluetooth?
I guess so.
Anyway, yesterday, just as I was finishing up listening to Voyager, the third book in the Outlander series, my DONGLE gave up the ghost. Now. Whether or not this had to do with overuse and excessive cord-pulling via cabinet knobs, mostly, by me or Owen deciding to unplug my headphones from it in order to plug them into another device, I do not know but the bottom line was- no doing on the DONGLE.
The DONGLE came with the iPhone in order to prevent all of us old dodders who listen to audio books all day from having meltdowns, I assume. There must be a few of us, at least, who have made the leap from books on tape to books on CD to books on the phone. It all reminds me when Steve Jobs suddenly decided that the floppy disc was over, done, kaput, antiquated and quit putting them in all of the Apple computers which DID cause meltdowns all over the place because floppies were the technology of the day and we all thought we'd DIE but we didn't. We bought clunky disc drives until we figured out how to use CD's and flash drives to transfer and store information.
Okay. History lesson from the aged is over.
Meanwhile, I needed a new DONGLE.
I won't go into the whole story because it's only slightly more boring than what I've already written but you can buy a new DONGLE for $9.97 at Best Buy and probably the gas station, too.
I should have called Apple and had them replace the one that came with the phone and broke but as I have far better things to do with my time, I just bought the fucking thing.

It was just a weird day. How can a day where you have to buy a DONGLE be anything but weird?
I even went to Japanica by myself. It was sort of great. I got salmon instead of tofu which is another huge break in routine. And it WAS great.
And then I messed it all up by going to Walmart and please, god, remind me never to go back there. I was looking for sewing patterns which I never found but I did see a local woman I have met who has about a dozen children and that's no lie. At least eleven. And at least six or seven of them were with her at the Walmart.
I have to say they were well-behaved.
I bought some junk I did not need but when you're at Walmart, you just feel compelled to buy some junk, which I did.
They probably have DONGLES but I'd already bought one.
And then I made the mistake of doing self-checkout which made me feel one million years old AND inept and meanwhile, there were two Walmart employees whom I assume were on the clock to assist us old, inept people because they were just standing in that area, doing their nails and talking to each other, but of course they did not assist me at all. They were probably secretly filming me to show at the next Walmart employee party to share the hilarity of it all. Lord GOD I hope they don't put it on Youtube.
If they do, I'll sue the fucking DONGLES off them.

Besides all of that, everything is okay. I've felt off kilter and slightly bitter and angry and depressed all day long but it's that's not normal for these days and times, I don't know what is.

I've made yet another huge vat of soup with about a cup of venison, cut up, and leftovers and the broth I made last week. It is delicious but I'm not even sure there's room in my refrigerator for what will be left over.

Oh- let me say that Mr. Moon did an amazing job with the wood duck last night. I guess he did some research on the internet because he came into the kitchen and cut that meat up into little bite-sized pieces and wrapped each one in bacon with a slice of jalapeno and a little bit of cream cheese and then cooked them on a wood fire until the bacon was done and they were amazing because I would eat a DONGLE with jalapeno and cream cheese, wrapped in bacon.
Hell, I might even eat a Brussels sprout prepared that way.
Eh. Maybe not.

Peace and love, y'all.