Here We Are And Tomorrow Here We Shall Also Be 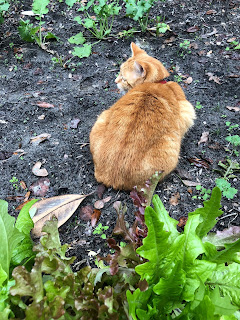 Maurice in the garden.

So. New Year's Eve.
Where that once meant going out and listening to music and dancing and partying and wearing black and eye-shadow as glittery as a mermaid's tail, it now means that tomorrow I will be cooking black-eyed peas.
And that is that.
Mr. Moon is undergoing treatment for Lyme disease and cannot drink any alcohol whatsoever with the medications he is on so he will be as sane and sober as anyone could be tonight. I did make him chocolate chip cookies and that will be his indulgence.
He's been taking these meds for about a month and a half now and will continue on them for about that same amount of time. I don't know if you remember but two years ago he went through almost a year's worth of testing for every sort of illness known to mankind which could explain the neuro-muscular symptoms he was experiencing and nothing came up positive. His neurologist was admittedly baffled. In the two years since, he has gotten worse. The muscles in his legs have weakened and walking has become more difficult.
And then he spoke with a woman he met in Georgia who'd gone to a doctor there who'd treated her for Lyme disease and the woman has gone from being almost crippled to fine. So Mr. Moon made an appointment with this doctor and when she met with him, she said that she was going to treat him for Lyme because nothing else had come up and he'd been exposed so many, many times.
And he is noticing some improvement. It is a process. Nerves regenerate very, very slowly. But. Any improvement is so encouraging.
And if I wish for anything this year on a personal level, it is that my husband does get better. He hasn't given up any damn thing at all. He has continued to work and to hike through the woods and to build things and to fix things and to hunt and to fish and to go to the gym but it has been getting harder, although he never says much about it. He just pushes on.
He is the strongest man I know.

I've always suspected that some tick-borne illness might be the cause of his problems because it fit so many profiles although Lyme, especially, can present in so many different ways. It is a wily and horrible bacteria and I don't think that "modern medicine" has caught up with it yet, but it would make sense that a doctor in a very rural area in Georgia sees a great deal of it and has experience with diagnosing and treating it. Ten years ago you'd have a hard time finding a doctor in this area who even admitted that it existed this far south. At least that much has changed.

And bless us all, we whose ancestors made their way from the salty womb of the ocean trillions of years ago (that's just an estimate on my part) and slowly and inexorably changing, cell by cell at a time to become the crazy creatures we are today who make calendars and call one day the end of one year and the next day, the beginning of another.
Of course, I believe that aliens were involved but that's another story.
Still, the sea calls us and our blood is salty and before we are born we float in a sort of personal sea within our mothers and when we cry, we release tiny drops of ocean from our eyes. All of this gives me comfort when I think about the horrible things going on in the world today. We, as a species, are so fleeting in the great span of time and I can't help but hope that if we do indeed make our planet completely inhospitable to humans, eventually the oceans will recover enough so that perhaps some different sort of creature will will belly itself through the sand and find a way to breathe whatever is left on earth to breathe and there you go- Bob's your uncle- and life on this planet will continue even if it's a sort of life we would not begin to recognize.

Talk about your new beginnings!
Well, Happy New Beginnings to you and to yours.
And peace, and love. All that hippie shit which I actually mean with my whole hippie heart.

I've posted this before but I'm posting it again. I do believe that this was the first world-wide broadcast via satellite. Can you imagine something like this happening now?

Well. As dear John said, "Imagine."
And as he and Yoko said, "War is over if you want it."

We persevere. We carry on.