We Shall Survive. I Swear. Plus, Greek Salads And Lots Of Love 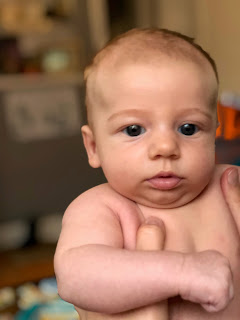 I was going to go hang out with Maggie while Lily went to get her teeth cleaned but then she and Jessie and I decided that we wanted to go see May because sometimes you just gotta go see May because she is precious and we love her. So I drove Magnolia June over to Jessie's house and we visited and played with Levon and I read some books to August and Maggie busied herself with the novelty of August's toys until Lily was through with her appointment and then we went to the restaurant where May is now working. Same owners, just a different location and we like this location a lot better. It's funky and comfortable and it smells really good. Like pizza.
I knew I was making pizza tonight so I had a Greek salad which was delicious. Here in the south, for some reason Greek salad frequently comes with potato salad and that's just even more goodness on top of goodness and this potato salad and the Greek salad were terrific.
But not as terrific as it was to see May.

Here's Maggie looking at "the baby". 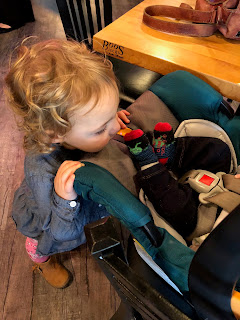 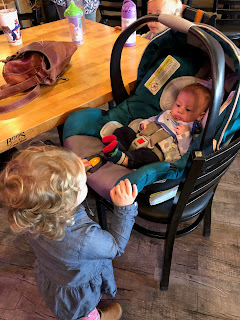 She really wanted to play with him and tickled him some and he seemed to like it. He's getting almost chunky, that Levon of ours. 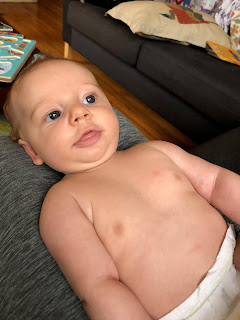 That's when we were at Jessie's house and he was getting his clothes changed.

It was an extremely fun lunch and yes, I have gone out to lunch three times this week with my family in various arrangements and I am as happy as I can be about that. Let's face it- it's about the only social life I have and I wouldn't trade it for anything.

And here's another cool thing that happened today. 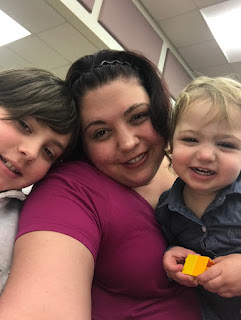 An awards ceremony!
No, I didn't go but Lily sent pictures. I'm so proud of my boy! He's really getting into reading these days and he got an award for that and for being on the A-B honor roll and for good citizenship.
Owen! You are growing up so good!

All day, of course, I've been thinking about DT's "shithole" comments which were crude and cruel and racist and just plain wrong. I mean, I may use profanity and so can DT but not in his role as president while discussing policy. The man has proven beyond all doubt that he is a racist of the worst kind and also, that he's dumber than a box of rocks to suggest that Norwegians might want to come over here and help Make America White Again. And then he has the gall to deny saying what he said and THEN he has the gall to say that canceling his trip to Great Britain has anything to do with the new embassy when we all know that Great Britain has made it profoundly and perfectly clear that they do not want a visit from DT, thank you very much, stay home you chickenshit, dumbshit, shithead, asshat, racist, bullying, cocksucking horrible excuse of a human being, waste of air and water and McDonald's hamburgers, pretender to the office of president of the United States of America.
Will our country ever regain any respect at all?
Will we ever recover from the shame and embarrassment?
Will we ever recover, period?
And when will DT's Republican minions finally admit that yes, he's crossed a fucking line (about 2000 times) and needs to go? Because they are as responsible for this clusterfuck as he is.
I am horribly afraid that as long as the market continues to spiral upward, they will just puke in private and count their money.

Okay! That's enough politics!
I have electric power, I've gotten baby kisses, daughter hugs and eaten potato salad today and I'm drinking a martini. It's going to get down into the thirties tonight but I have new Crocs with cozy, leopard print linings and we have gas in the tank and food in the pantry and gospel music cranking out from the church next door.