Barely Making It Is Still Making It

Still anxiety teasing me with its fangs, its claws.
I did what I could to best the beast. I walked three miles. I finally downloaded an app that tells me exactly how far I've walked and in what amount of time and that's all I want. I don't care how many steps I've taken, not really, I just need that motivation of "another mile".
Silly but- whatever works is what works.
It was so beautiful today, as it has been the past few days. Sky so blue you have to blink to believe it, the air so clear and cool. I really wanted to just curl up on the sofa but I went out and began to trim the dead passion flower vine off the fence, a job that has to be done every winter and which is not difficult or unpleasant, it just takes getting started which is so true for much of life.

Mr. Moon, who has been trying to figure out the best way for us to get our TV, internet, and phone, finally decided to go with a company and they sent their guy out while I was pruning.
"Are you the, uh, worker?" he asked me.
I laughed.
"Yes. Yes I am. Also the wife."
"Oh, okay."
Next thing I knew he was telling me that without us cutting down at least three trees, we were not going to get satellite for the TV. He was a funny guy and a gregarious one. We ended up discussing everything from child rearing to how much Key West has changed in the past twenty years, to the degeneration of coral reefs and the ecosystem of the oceans in general, to DT (we both loathe him), to Republicans in general (neither of us understand how anyone can be a Republican), to Obama (we both love him and I actually teared up when I got on my soapbox about how intelligent and educated and cultured he and Michelle are), to racism to sexual harassment to child abuse to...
Well.
We covered a lot of ground.
When he left, we shook hands and he said, "I sure enjoyed meeting you."
"And I enjoyed meeting you, too," I told him.
And then I finished pruning the passion flower vine and then I ironed some shirts.

So. That was it for me today. Plus, you know- the little stuff that must constantly be done to keep a house running.

Mr. Moon talked to his Lyme doctor today and she wants him to continue on the medications for another three months which is a rather dreadful prospect. She also wants me to give him a daily B-12 shot for the neuropathy he has in his feet. This is not news he wanted to hear but by god, he is walking much better and his balance, although not perfect, is also better. I can see it, he can see and feel it. He even thinks that the neuropathy is better as well and if it can get a lot better, he is willing to do what must be done. I haven't given an injection in about twenty-five years but I'm sure that Youtube will help me with that. Mostly all it takes is the courage to do it- again a truth for much of life.
Despite the fact that the drugs he is on cause stomach problems (and yes, he's taking lots of probiotics and eating yogurt daily) it is a stone-cold miracle to see the improvement in his walking and the hope that not only whatever this horrible debilitating process is will not get any worse but in fact, can be reversed, is motivation enough to keep on with it.
It's rather unbelievable after all of the testing he went through with absolutely no answers found, no remedy or hope offered, to have this country doctor from Georgia say, "Yes. This is what I think you have, and this is what I think you need to do," and see such improvement.

And here- in the spirit of There Can Be Joy- is a picture of August who got his first mani/pedi from his mama. He chose the blue nail color. 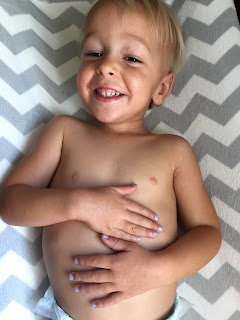 I think he loves it.

And I love him.

Hey! We made it through another day. Or at least, I almost have. Which means that in not too many hours I will be allowed by custom and conscience to lay down on my bed which is the most comfortable bed in the world, and pull my pillows around me and take up my book and read until I am too sleepy to read any more and then I will turn out my light and rest again.

Talk about your motivation.