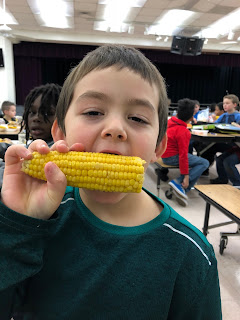 I woke up with dreadful anxiety this morning. I have no idea why. I knew I was going to go eat lunch with Gibson and then read his class a book but that shouldn't have caused it. I was just at the school last night and have been there plenty of times and it's a kindergarten class and I always enjoy hanging out with the little kids before they become purveyors of what's cool and what's not.
But I was.
Anxious.
As hell.
As if that damn beast had just been hiding under the bed and shown up, suddenly and inexplicably to bare his yellow teeth and his raking claws to remind me he was still around. Sort of the opposite of Maurice showing up just as suddenly and inexplicably to snuggle and cuddle and purr.
But I got myself together and went to the school and signed in and Gibson was SO glad to see me. He kept telling me, "Mer, I'm so glad you came!" We went to the cafeteria and it was interesting to see what the kids picked for their lunches. Most did pick the "cheese plate" which was indeed a kid yogurt, a string cheese, and a little package of granola. They also got to pick two other items of the fruit and vegetable variety. Gibson got an ear of corn and a tangerine with his cheese plate. I helped a little girl open her granola package and damn if I didn't have to pull out my pocket knife to do it which probably broke about fifty rules. It's not a huge knife but it's a real knife. Gibson spilled his granola all over the floor but whatever.
After lunch we all lined up and went back to the classroom and Gibson's teacher asked him to introduce me to all of the children sitting on the floor in front of me. And so he did. He announced the name of each and every child in his class and I loved that the teacher let him do that. Then she asked him to tell them my name, which he did- MerMer. I loved that too. Then I read The Little Red Hen Makes a Pizza which I may have mentioned I have read at least a hundred times to Owen and to Gibson and I used all of the voices and got the children to chime in for the parts where the Dog, the Cat, and the Duck say, "Not I," in response to the Little Red Hen's requests for help. 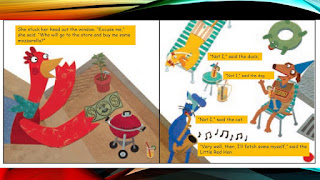 The kids were so good and they had lots of questions and were extremely attentive and laughed at the funny parts and were amazed at what all the Little Red Hen bought every time she went to a different store to buy the things she needed to make her pizza which is a huge part of the fun of the book. She goes out to buy a pizza pan for example, and comes home with not only the pan and a pizza cutter but also bagels, doughnuts, rubber gloves (that would fit a chicken), a measuring stick, a plant, and a kitchen sink.
It truly is a lovely book and although I have read it so many times, it never ceases to delight me.

After I'd finished the book the teacher had an activity planned to go with it. She had cut-out circles of brown paper for each of the children to make their own pizzas with scraps of colored paper and scissors and glue sticks. I'd let her know what I was reading but I had no idea she'd incorporate the story into an activity so nicely. This same woman was Owen's teacher in kindergarten and she's one of the very special ones. When she told the children about making their own pizzas, I told her, "You're magic!" and she laughed.

So that was all good although the anxiety hung on like a summer cold but Jessie invited me to go to Costco with her and the babes and so I did and then yes, we ate lunch, and that was nice.
When I got home I made an effort to chase the demons out by doing the things which make me feel virtuous like cleaning out the hen house and putting the poopy straw on the garden and filling up the chicken waterers and taking the trash and watering my inside plants and sweeping. And then I tried doing something that makes me feel grateful and which pleases my soul which was picking camellias and bringing them in and putting them in vases and when I'd done all of that I started a new monkey man for Gibson, sitting in front of the TV watching some of the newest episodes of Grace and Frankie on Netflix. I'm sewing the monkey by hand this time, having more than a day to do it although in the grand scheme of the universe, it will never matter in the least how I stitch those socks up.

And I think I've been going through a bit of wondering if anything I do makes a difference.
But when I look up into the night sky at the stars and the silent silver witness of the moon, I wonder if anything that anyone does really makes a huge difference in this universe and I comfort myself with the thought that I, like billions of women who have lived on this planet, am a tend-er. I tend to that which is before me and if that's all that I can manage, well, then that's all that I can manage. 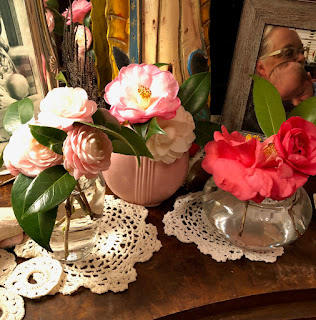 There's my latest crop of camellias. They are coming back like crazy after the freezes.
I planted those beauties. I tended them. And I cherish them.

And today I made my grandson happy by nothing more than having lunch with him and reading a story in his classroom.

Doing my best. And the anxiety will pass as it always does.