Very important for my Tallahassee friends to understand that this is shaping up to be primarily an ICE event, not SNOW. We might see some snow at the beginning or end, but the NWS forecast calls for as much as .3 inches of freezing rain, esp. in eastern parts of Leon. THIS IS NOT GOOD! Freezing rain is rain that freezes on contact -- with the ground and with trees. Moss-laden trees can not hold the weight of .3 of an ice. Some of them WILL come down (if we get that much freezing rain). A glaze of ice on the roads is MUCH more dangerous than snow. Bridges and overpasses in particular become virtually impassable. When I lived in Shelby N.C. almost 20 years ago, we had .5 inches of freezing rain. When it was over, guess how many people in town had power? NOBODY! It was a war zone of fallen trees and power lines. Certainly not saying that will happen here, but if the worst case happens -- a third of an inch of freezing rain -- Wednesday morning will not be pleasant. Hopefully, we get some snow and sleet mixed in -- not nearly as heavy on trees. Remember, bust potential on this storm is high -- even recent model runs show that a tiny 50-mile shift in track can be the difference between no precip and .5 inches of liquid. Brutally tough forecast for the NWS folks. Be ready for anything in the morning.

Are you fucking kidding me? Say what? Wasn't it just a few weeks ago we were freaking out about a hurricane?
Yes. Yes it was.
This just sucks.
And also? We are such wimps here, so unused to anything but rain and once in a blue moon, hail, falling from the sky, that just the threat of some ice and they're closing down the schools.

I spent the day cleaning out closets. I didn't really do a great job. I will not swear that there is no longer any mouse poop in them but I will say that I took an entire carload of crap to the dump and have a very nice-sized donation to make to Goodwill. Or whoever. I didn't touch any of Mr. Moon's stuff but he needs to do the same thing. And I should have gotten rid of about ten times the amount I did but this is a process, y'all.

I discovered today that I have five suitcases. This is hysterical in that I hardly ever travel anywhere. I also found at least twenty pillowcases. Why? How? I have no memory of hoarding pillow cases. But if you need a pillow case, I'm your gal. I organized all of my wool-related projects into one container which I recently cleaned out. My wool-related projects are all about two inches of no defined knitted purpose made of very nice wool. I don't ever make anything when I'm knitting. I just knit.
But at least all of that knitting is in one place along with the wool and needles.
I'll tell you what I did not find today- the two calendars that I bought before Christmas. They've simply disappeared. Gone. Never to be seen again.

I got some nice pictures from Lily and Jessie today. Jessie took her kids to the Big Library's story hour and here's what Levon thought of it. 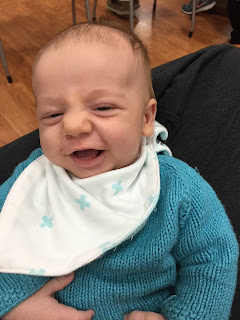 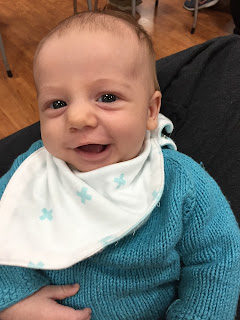 Is that kid a gorgeous goof or what? Man, I love that kid. I could snorgle him to pieces and he's too young to complain about it. This, in my opinion, is one of the best things about babies.

Here's what Lily and her kids did today. 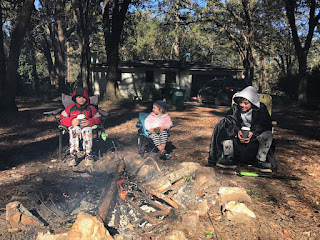 They had a fire and sat outside and drank hot chocolate. I guess it's hot chocolate. I am almost certain that Lily would not give her kids any coffee, although Owen insisted last week that his mother did indeed let him have lattes.
That child.

In chicken news, Honey has found somewhere else to sleep. Also? Tonight I watched Mick kick Joe Cocker and Pearl out of the hen house. Joe Cocker said, "Fuck that," and went back in but Pearl did not. I'd say that I hope he doesn't freeze to death but that sure would solve a lot of problems.

And that's the news from North Florida where it's colder than it should be and where, if it gets as cold as they say it might, we are screwed. We'll be burning our furniture for warmth. We'll be sitting in our cars with the heaters running until we run out of gas. It's the Icepocolypse! The Snowpocolypse!
It's supposed to get down to 24 on Thursday!

I found some gloves when I was cleaning out closets today.
Just in the knick of time.

Watch out for the black ice, y'all! I hear it's deadly. Whatever it is.