The WTForecast weather app claims that it is "Fucking cold and stupid" and I have to agree.
It's not really that cold but going to get a lot colder and the gas tank guy came by today and said that we probably need a new tank and oh, by the way, we're down to 12% gas in the tank we do have which is probably leaking.
We're going to die.
No, no. Of course not.
Anyway, he explained a lot of things to me about how back when they put this tank in the ground they didn't understand about how electrolysis affected tanks put in the ground and so on and so forth and this is going to be one more reason for my husband to simmer silently about buying such an old house when he didn't want to buy an old house but he bought it for me because I was desperate to live in this house, absolutely unreasonably desperate.
And I sill feel that this is the only place I've ever lived where I truly felt I was home.
Home.
I love this house so much.
But I love my husband even more and I hate being the cause of any upset. It makes me feel like I'm seven years old and have done something to piss off my mother or my grandfather and it's just a horrible feeling.
Sixty-three years old and as Yoko Ono said once, "It's the faint, faint sound of the childhood bell/Ringing in my soul."
Except that it's not that faint.

So. Today I used my indoor-time to clean and organize the shelves in what we call The Glen Den or alternatively, the Museum Of Mr. Moon.
These are shelves which are built in on either side of the fireplace and I literally spent most of the day on this project and I doubt anyone in the world would notice I did it. But, the fact remains- I did.
Here's one side. 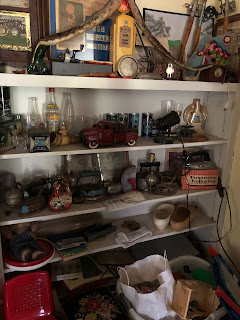 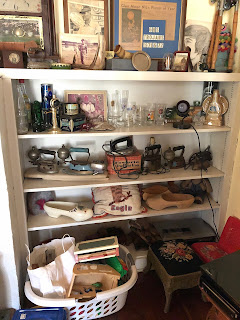 After.
I'm sure you see the difference.
I removed a few things and put them in a box as Jessie advised I should. These are things that really have no intrinsic or nostalgic value at all. He can go through the box and see if I've gotten rid of anything he really wants.
I also did the mantel itself which was a little difficult because that's where his vintage fishing lures are. Lures have hooks. Thus, the lures didn't really get cleaned.
Sigh...

So that's been my day. I actually walked to the post office which is about half a block away. I did not freeze.

So. Yes. It's fucking cold and stupid or at least I'm fucking cold and feeling stupid.
But I will rest well tonight knowing that the beer glasses Mr. Moon brought home from Europe when he played basketball there are clean and dust-free.
This will last approximately one week.
And this is how it goes.

Be warm. Take pride in small things. Try not to listen to that faint, faint sound, even if it's more gong-like than bell-like.
Remember to believe in spring.