I feel disheartened today and discouraged too.
It's nothing but a bit of housewife blues. I spent the whole day doing bits of this and bits of that around the house, none of it, as I always say, which anyone will ever notice and all of which will need doing again before I know it.

I cleaned the little altar vanity in my hallway. The new one across the way from it shamed me into it with its gleaming, almost empty surfaces. I took everything off the vanity and dusted the seashells and turtle shells, I carefully wiped down the Virgin of Guadalupe and kissed her rosy lips. I even washed all of the Cozumel sea glass that Mr. Moon and I collected one year in the surf across the street from our hotel and the vase that I keep it all in. 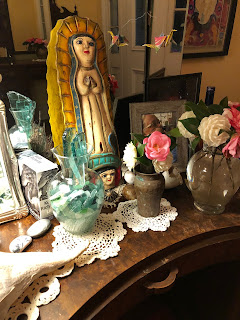 And then I picked and vased all of the camellias I could because the blooms are going to freeze tomorrow night. 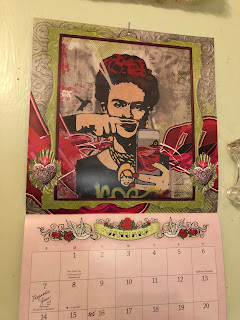 My 2018 calendar finally arrived in the post office today and I took down the old one which was a freebie from the Florida Seafood Council (need a recipe for fried alligator bites?) and transferred all the birthdays and anniversaries onto the new one and hung it up.
Yo, Frida!

I did laundry because I always do laundry. I swept but I need to sweep again.

I took the trash and recycle.

I ironed a few of Mr. Moon's shirts, getting halfway through one before discovering there was grease on the back of it. Well. He IS the Car Guy.

This is life. I remember I had a neighbor once who refused to pick the trash up in front of her house because people would just throw more.
Uh. Yeah.
That's like saying that you refuse to make breakfast because by lunch, you'll just want to eat again.
I mean, of course, but let's be reasonable.
Still, I understand her feelings. How many times a day does one need to sweep the kitchen?
As many times as people walk through it.

And that's where my feelings of discouragement and being disheartened come from. I do not feel as if I am being productive in the least, but merely reactive.
Or something.
Whatever.

Okay.
Product placement time.
Wait! Aren't I supposed to get paid for that sort of thing?
Oh well.
So, a few weeks ago I got online, as one does, and ordered two things I've been wanting for quite awhile. One, the ugliest pair of Crocs ever invented and which, when you wear them, you are literally saying, "I am old, I am ugly, I do not care. I have given up."
The other was a jar of face cream. A long time ago I got a tiny travel size container of this face cream before I went to Cozumel and somehow, that stuff has lasted forever. I've taken it on every trip I've made since then and there is still face cream in it. After I finished the last miracle wrinkle reducer I'd bought which is neither miraculous nor a wrinkle reducer, I thought, Fuck it, I want that same face cream I bought to take to Cozumel because nothing in this world short of plastic surgery is going to de-age me so why not just go with the one that smells good? 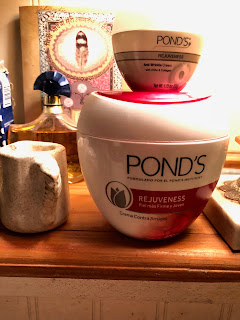 There you see the big jar and the little jar. The big jar is REALLY BIG! As I said when I bought parmesan cheese at the Costco, I need to put that shit in my will.
But I don't care how long it takes me to use up. I really do love the way it smells, sort of like a cross between old lady powder and babies and it moisturizes as well as anything and hey! Ponds has been around since the dark ages and they should know what they're doing by now. Am I right?
And by the way- these ugly Crocs have changed my life because they are like warm, comfy slippers that I can go outside in and get chicken shit and dirt and other sort of stuff on without worry.
Now. If Ponds or Croc wants to give me some money, I'll take it.
I have a feeling they aren't going to, however, but it doesn't really matter. These are products I like. 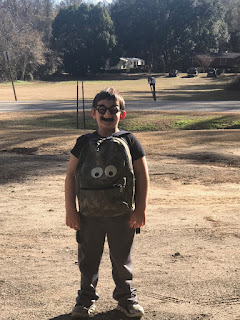 Lily sent me that today and said, "Why does that look natural?"
Oh, Gibson. You are a precious and funny and darling old soul and I wish I was going to be around when you're old in this lifetime because I have a feeling you're going to be amazing. 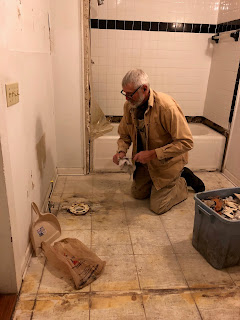 That man! He not only got the toilet out since he came home from work, he also capped off the water pipes under that bathroom which involved going under the house (which is really scary) and fluxing something? and soldering and other things which I do not understand. Hell, I couldn't even turn the water off at the meter if I had to.
He sure does love a project and I sure do love him.

Well, reading all of this I'm not exactly sure why I feel so disheartened and discouraged. I guess it's mainly the fact that none of the work I do leads to anything at all like a new bathroom. I just clean bathrooms.
Occasionally. 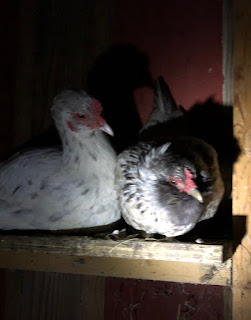 Here's my sweet little Dottie and Violet. They both laid me eggs today.

And here I go to make some sort of soup. I have no idea how it's going to turn out but it'll be warm.