In Which We Visit The Junior Again

Last night I rolled over in bed and suddenly felt as if the bed were tipping me out. "Whoa!" I said, and it happened again every time I rolled over. When I got up, I did it slowly, but felt fine until I leaned over for something at which point, the dizziness returned.
Ay-yi.
I figure it's that Benign Paroxysmal Postural Vertigo which has something to do with the inner ear and little crystals and there are exercises for it which I will check out if it doesn't go away soon. It's still with me now but it's not bad. A bit of a trip but not bad.
It didn't stop me from going to the Junior Museum with Lily and Maggie and Jessie and August and Levon. It was the perfect day for visiting the Jr. Clear blue skies, cool temperature, sweet air. Except for near the skunk and vulture enclosures where the air was a bit more aromatic. But that's to be expected.
The real reason, of course, to visit this place, is to be outside with plenty to keep us occupied, to see, to explore. And Maggie and August have already been there so many times that they practically know each animal personally. And for me, the best part is watching them. 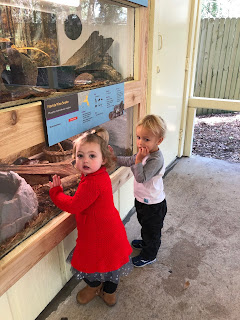 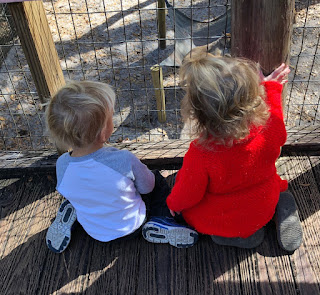 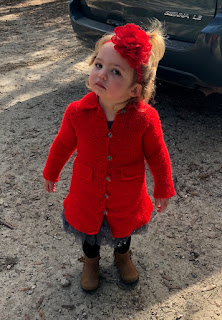 Maggie, as always, wanted to hug the hell out of August. She gets pretty determined about it and when I say "determined" I mean chokey. August understandably pushed her away and Lily told her that August didn't feel like being hugged just then but the boy charmed us all when a few minutes later he put his arm around his little cousin and gave her a side-hug.
And when he asked me to carry him, which I did, I said, "August, you like MerMer to carry you, don't you?"
"Yes," he said in his solemn August way.
"Why do you like Mer to carry you?" I asked.
Instead of saying anything he leaned his head over and presented his cheek to me to kiss.
He's figuring out this love-stuff.
Later he made me laugh like hell when he demonstrated how his brother cries, how he cries, how his mama cries, how his daddy cries, how his Mer cries, how his Bop cries, etc., etc. Turns out we all cry differently. Some of us sound more like we're coughing than crying.
You just can't be bored or sad or very anxious when you're around such beautiful, funny children.

Levon was a good boy today, as he always is. Here's a precious picture of him being held by his Aunt Lily. 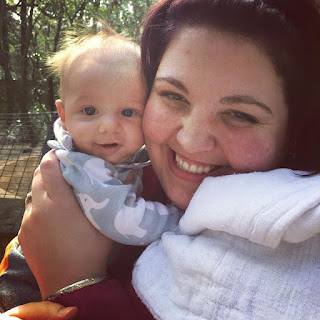 He gave her some of the biggest, goofiest toothless grins today. He's getting very attentive and loves to watch the other children. And his eyes are still quite blue. I sing him the lines from Dylan's A Hard Rain's A Gonna Fall that go, "Where have you been, my blue-eyed son? Oh where have you been, my darlin' young one?"
He likes it. 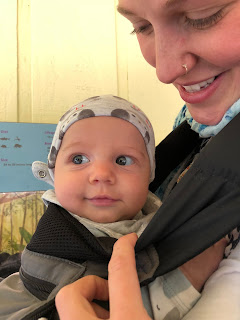 Are y'all bonding with him yet? I hope so. 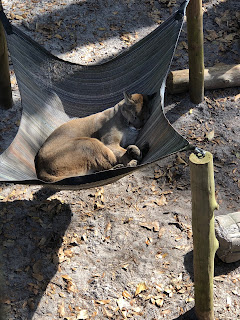 The cougar, napping in her hammock.

And here is the part of place that I believe I love the most. 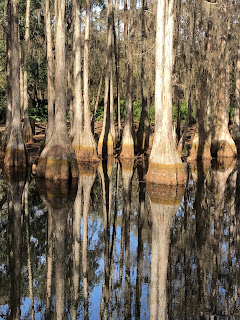 The cypress trees, reflected in the still water. I swear, something about this scene absolutely does something to my brain. I can feel the endorphins flooding and I am immediately happier and more at peace. It's just so magnificent and makes me so damn grateful to live on a planet where cypress trees grow up out of lakes and are mirrored in their waters.
Holy, holy, holy.

We got to chat for a long time with the guy who's been the animal caretaker for a lifetime. He sat in the otter enclosure and told us stories about where the otters had come from and how long they'd been there. All of the animals at the museum are unable, due to one circumstance or another to be released into the wild. Some have injuries which would prevent them from hunting and mating. Others were rescued at such a young age that they imprinted on humans and would not be able to make it on their own.
It's truly a beautiful place in all ways and we got to see those otters loving on their caretaker and trying to see what he was hiding in his boots and rolling about together in happy play and swimming in their pond with the grace and elegance of swans.

We didn't have time to visit the farm or see the domestic animals because Lily had to pick up the boys from the bus. It was dress-as-your-favorite-book-character today at their school and this is what they looked like this morning. 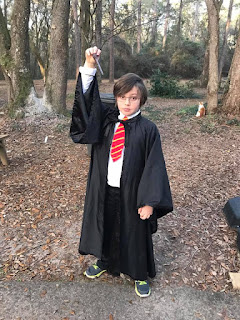 Owen's Harry Potter cape that I made him last year from a black satin sheet is still hanging in and Lily made his tie at 11:00 last night and his daddy made his wand. 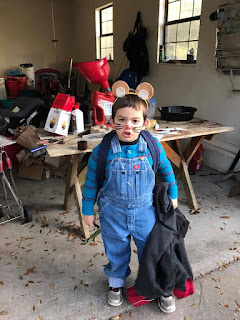 Gibson was the mouse from the "If You Give a Mouse a Cookie" series. Lily made those ears last night, too and when Gibson saw them this morning he said, "Wow, Mom! You really outdid yourself!"

And here's the funniest story of the day, as far as I'm concerned:
When the boys got off the bus and got in the car, Lily asked Gibson how it had gone. He said, "Great! McKenna made me her pet! Can I dress as a mouse every day?" McKenna is his true love. The one whom every time he sees her, he has to run away because he loves her so much.
Oh, my Gibson.

And oh, my Owen and my Maggie and my August and my Levon.

Lily asked me an interesting question today. She said, "What would you be doing if you didn't have all of these grandchildren?"

I had no real answer.

Moot point.
I do.

And it seems to me that as I love and laugh with them, they are loving and laughing with me. Equally.
And whatever it is that they learn from me is more than equaled by what I learn from them. I always said that my kids were my greatest teachers, and they were. And part of what they taught me, although I did not know it until I had grandchildren, was how to be a grandmother.

It all works out.