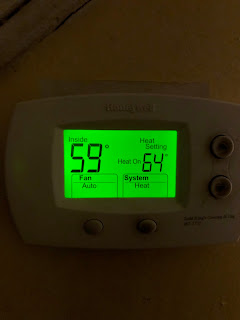 The gas man came and he probed and he tested and he delivered unto us some propane.
I swear to god, I was so happy to see that guy. He was like an angel to me. He said there are no leaks in the tank so there you go. He had testing equipment that the guy yesterday did not have. The meter box for the probe required four C batteries and his were dead and he had no spares. I had none. I drove up to the horrible convenience store where you can indeed buy gator heads BUT NOT C BATTERIES.
I called my neighbors. They had some. Bless, bless, bless.
And then I cranked up the thermostat as you can see above but honestly, when it gets this cold, the heater might not actually get the temperature much above 59 but I can live with that. And I don't have to worry that we'll run out in the middle of the night.

I've had a very emotional day and I feel wiped out. I wasn't emotional about the gas. About something else but it's going to be okay and no one is sick or anything. Just...stuff. But it's been a long day of waiting and of feeling feelings and I'm not so good at either of those things.
I did start making a sock monkey doll for Magnolia June who turns two on Sunday. I got this far. 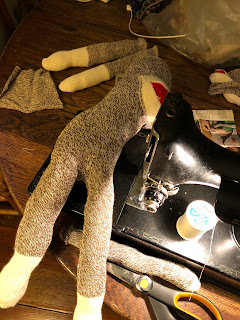 I've got the arms and the tail ready to sew on and then I'll make the hat and sew it on and then the ears and then make button eyes and embroider eyelashes and a heart and give her (she's a she) earrings and if I have time, I'll make her a little dress out of the same material I've used to make Maggie a dress. And so that was fun and I love making these silly sock monkey critters. I owe both Gibson and Levon their own Monkey Men. Gibson's birthday isn't that far away and I'll make his for then.

This morning I thought my garden was gone. 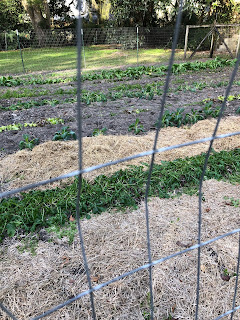 Everything just looked awful and all flopped over and wilty but by this afternoon, it had perked up considerably.
I am so grateful.
Those greens are what get us through the winter in a happy and healthy state.

So that's all the news that's fit to print.

I must go make soup.
Which will have greens in it.