The Difference In Brothers


Three days short of two years ago I wrote about Owen's Fairy Tale Ball when he was in pre-K and how terrible and awful and embarrassing and mortifying and frightening it was for him. You can read it about here, if you want. And if you don't want to go back and read all of those words, here's a picture. 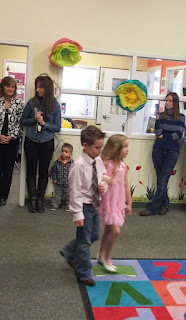 It truly was a most traumatic experience and I seriously doubt he's gotten over it yet.

But today was Gibson's chance to be a prince at the same school and here's what he looked like as he entered the room with his princess on his arm. 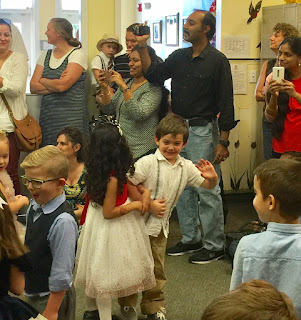 He was like George Clooney on the red carpet. I swear. He was waving, he was holding that pretty little girl's arm, he was ready to DANCE! And dance he did, twirling his lady, taking the job seriously but having fun doing it.
After the slow dance, they all lined up in rows and sang and did the motions for another song that was way funkier and Gibson was so into it. When I say that he was the most into it boy there, you can believe me. He raised his arms in the air and made a beak and did the monkey and made it funky and he wiggled his Gibson butt and he grinned like he'd never done anything quite as fun in his life.
And after THAT, when it was time for the children to dance with one of their parents, this happened. 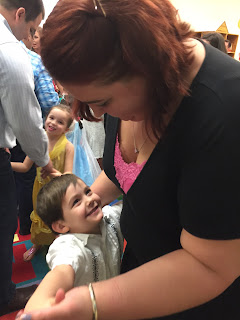 Oh my god. He was the happiest, proudest kid in the room, dancing with his mama.
Lily's little bear cub. My Gibson. Our Gibson.

This whole Fairy Tale Ball thing is sort of whiffy of non-political correctness and quite possibly guilty of a whole bunch of gender-role and cultural sins but goddam it, it's fucking cute as hell. And there are no rules about what the kids have to wear. They are told to wear whatever they feel best in. And it would seem that most of the little girls feel best in long, fancy princess dresses and tiaras or maybe that's their mothers' influences but all-in-all, it's just pretty sweet.
And seeing all of the parents who have somehow gotten off of work whether in offices or on construction sites to come and watch and then dance with their babies is enough to make your heart melt. Add in the grandparents and the younger siblings and just try to get out of there without feeling better about life.

As always, it's all about love. Love for our babies and as Gibson was dancing with his mama and I was holding Maggie, Mr. Moon leaned over and gave me a kiss.

There's still room for some of that in our world. Or at least, that's what I think.