WHAT Is Going On? 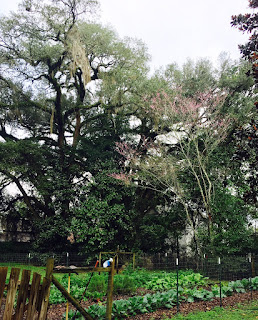 The rain and wind have passed, leaving the sky gray and the air heavy but with its own beauty.

I have been having the most cinematic dreams lately. The one I had this morning was absolutely undefinable to me as to where it may have come from. In it, I was lost in a big city and a seemingly kind lady offered to give me a ride to where I needed to be but instead, took me (and somehow one of my brothers was now with me) to her house where her evil husband resided and it soon became apparent that the entire house was filled with monster-like family members and that my brother and I were to be made sacrifices of and tortured, and more and more people kept showing up for the ceremony.
They were toying with us, as we pretended we had no idea what was going on, meanwhile trying to get a phone call out for help, and at one point, the evil husband fell down the stairs and appeared to be dead and I said, "Oh my god! Should I call 911?" and the wife looked at me in such a way that I knew this was part of the act and the man slowly opened his eyes and laughed.
BUT! Not to worry! Because when he finally came after me, I struck out and my hand went right through his face and suddenly, it was Zombie Apocalypse!
And these zombies were easily deterred by punching them and my hand and arm went through all of them (which was a most bizarre feeling) somehow disabling them and then we were in a mall and there were zombies everywhere and I grew weary of the zombie struggle but there were just so many!
How this ended up I do not know because I finally woke up. I knew it was a dream while I was having it and even as I was dreaming I wondered why in the world I would be dreaming of zombies which trust me- are not something I spend a lot of time thinking about. The only zombie movies I've ever seen, I think, are "Shaun of the Dead" and "Zombieland."
I do not watch "The Walking Dead" although Lily is a huge fan.

Perhaps this is how I'm dealing with the present situation which is what I'm choosing to call what's going on in our country right now which is no more rational or understandable than having a dream about zombies who hold sacrificial ceremonies in which torture is involved.

In my own very real life (I think) I am surrounded by things like flowering redbuds and camellias, birdsong, gray sky, an orange cat walking across the backyard and lovely hens. 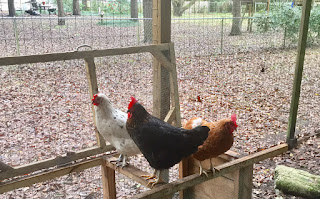 Here you see Dottie, Trixie, and Butterscotch.
I have already received one beautiful green egg from Camellia and I much prefer this world to the dream world although I have to admit that it's an interesting world and I am quite surprised to find that my brain holds anything like what it must take to put that world together as I sleep.