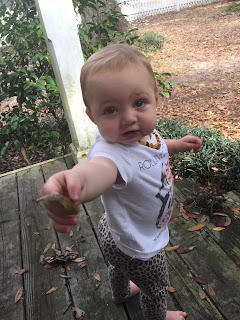 Maggie and Gibson came over today for a few hours. Jason and Lily had to work and Gibson, who seems to have a little tummy bug, came along with his sister to be tended by me.
It was a sweet time, both of them such easy-going children. I mean, Maggie is a busy little girl but she is good-tempered and and loves to play at something for awhile 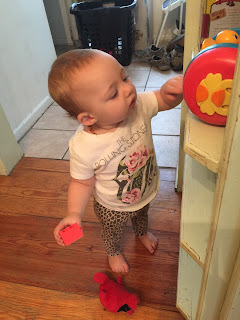 and then she calls to me and finds me and holds her arms out to be held. She is as juicy and soft as peaches, that one. She still loves to be kissed on the neck and will hold perfectly still for a long time while I snuggle and kiss her. I believe she may be hugged and snuggled and kissed a lot. Gibson is such a wonderful and loving big brother. He watches over her and if she starts to do anything which he deems possibly dangerous he lets me know. And he's so quick to stop whatever he's doing to make her laugh, to tickle her, to hug her, to tell her, "Maggie, you're so pretty!" 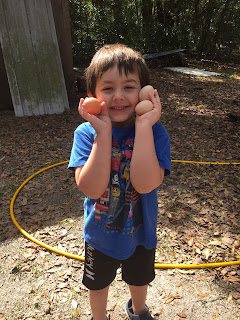 Oh, my little Gibson man! Do you realize he's going to be five next month?

When we came back in the house, Maggie was acting tired and Gibson wanted me to help him with something on my iPad so I did what Lily told me to do if it seemed like Maggie was ready for a nap and I put her in her car seat and gave her her pacifier and went to help Gibson a room away and when I came back in about two minutes, this is what I found. 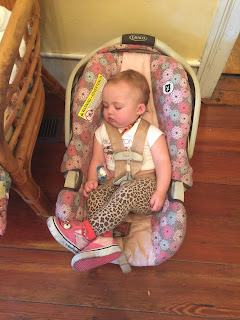 And then it was almost time for the mama to come and pick them up and I packed up the cheese toast squares that Gibson didn't finish for his lunch. He told me, "You can send those to my house if you want. I don't mind."

And so it went and I've made a beautiful pie crust and have cooked kale with onions and venison sausage and red peppers to make a quiche and Mr. Moon is home and has been showing me new additions to the house plans for Apalachicola. Electrical outlets and light fixtures and window placement. I, with my complete inability to visualize anything at all from a set of plans, just nod mostly and say, "I agree," and I trust him to figure it out.

I keep thinking about the house my grandfather had built for my mother and my brother and me, cement block with terrazzo floors on the lot behind his and my granny's house in Roseland. Two bedrooms, one bathroom, a small kitchen that had a pass-though to the living room, a dining area next to the kitchen. A back porch.
Done and done and Frank Holtzclaw, our neighbor from across the street who with his wife Joy ran the little store they lived behind, did the electricity and we were so very, very proud of that house. The living room held a couch, a chair, a black-and-white TV that got about three channels if we were having a good day, a cabinet with the portable record player on it where we played my mother's cha-cha-cha records and danced on the terrazzo, her little piano where I practiced my scales, and a brown rug that was the most uncomfortable thing in the world to lay on, our heads propped on hands to watch Tarzan movies or Sky King or Roy Rodgers or Jackie Gleason or Ed Sullivan.

That was the only new house I've ever lived in and I do remember it with some fondness, despite the horrible, terrible memories of things that happened in those few small rooms.

Well, enough of that. I need to go clean up from the quiche preparations and make a salad.
I feel myself swimming between worlds and places, ages and feelings.