A Goodly Plenty Of Arugula And Other Things 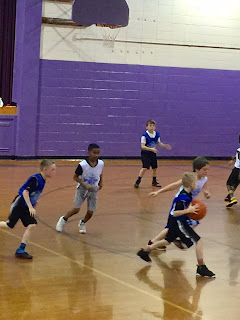 I know it's hard to tell, but that's Owen in the white shirt guarding the guy with the ball. He has gone from tearful defiance at the idea of playing the game to complete enthusiasm.
THIS is Owen.
He's just got to take some time to get his mind right.
He played two quarters again, running and guarding and doing all that basketball stuff and he even made his grandfather the happiest, proudest man in the world when he came running up the bleachers during a period of time when he wasn't on the court and knelt in front of him and said, "Boppy, I need advice."
And proceeded to listen to everything his grandfather said and then ran back to the sidelines.

Hank showed up to cheer the boy on today too and that was fun. We all passed Maggie back and forth. It's not easy to keep a thirteen month, very determined little girl contained and safe and happy for an hour in the bleachers. 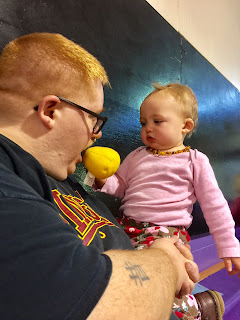 Here she is, feeding Hank her stuffed chicken. Would you look at that pretty little serious face? Isn't she just a doll baby? Her hair is starting to really come in and one of the things I did while trying to keep her entertained was to fish a comb out of my purse and comb those curls. She let me do it and then grabbed for the comb to try and do it herself which didn't work out quite so well and she handed it back to me and I combed some more, so softly, so gently.

Mr. Moon and I went to the store after the game to pick up a few necessities like milk and bananas and the coffee we like is Buy One, Get One, so we stocked up on that too. Lily was working so we got to see her and she took our cart out for us so we could chat for a second and as we walked out of the store, Jason and Owen and Maggie and Gibson were coming in from the parking lot. The boys went through my groceries like little gremlins and were sorely disappointed at what they found. There was absolutely nothing of interest to either of them.
"What did you come to the store for?" asked Gibson.
"I think they mostly just came for coffee," said Owen, holding up one of the many bags of French roast he found in my bags.

Hopefully, their dad bought more fun stuff than we did.

Anyway, it's been a sweet day and Mr. Moon spread some more of the wood chips about this morning. This is a rather herculean task and he takes his time and does it nicely, unlike me. I just toss it all around and figure that it'll all settle out evenly eventually. I spent a very small amount of time in the garden. I picked some mustard greens that are bolting and then pulled up the plants and fed them to the goats next door and then picked enough arugula to stuff a crib mattress and yes, I know I am prone to exaggeration but in this case, it's the truth. Half my refrigerator is taken up with arugula at the moment.
What the hell am I going to do with a kitchen garbage bag filled with arugula? But the plants are bolting and it's time to start getting other things in the ground and I need the room. I hear you can make pesto out of arugula and I'll certainly do some of that and freeze it but Jesus Please Us. Each batch only takes two cups of the leaves and I have, oh, about fifty cups. At least.
I also planted a row of sugar snap peas and that was a joy.
My eternally displeased familiar joined me in the garden. 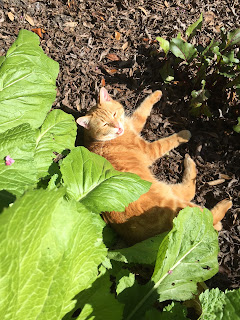 Here she is between mustard greens and beets.
I need to make some pickled beets this week and maybe I'll get around to that. I might throw some carrots in with them. The one row I planted of those has done really well.

Perhaps tomorrow we'll get the potatoes and onions planted.

The sun has set and I've shut the chickens up safely for the night. Mick has five hens clustered around him in the nest tonight and once again, I have no more idea of what prompts these bedtime arrangement changes than I do of what makes all of the hens suddenly decide to lay in one certain nest or, as they are doing now, on the ground under the nesting boxes in a little nest they've made in the hay.
I am sure that they have their reasons, even if I do not understand them.

And isn't it interesting and sort of wonderful that life holds so many mysteries?

This morning when I got up, I didn't feel fit to draw breath. I was drowning in anxiety, and yet, here I am now, as content as an old sow, and once again, I am thankful and in love with my husband and my family and my home and my garden and my cat and my chickens and looking forward with almost inappropriate delight to leftovers of that Greek-ish chicken and grains.