Maurice Is Growling At Jack As We Speak 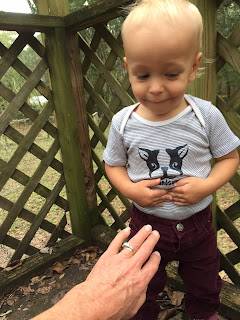 There's August on the play set tower after he climbed it his own self. After he got up there with his mama on the ladder to ensure his safety, he pointed at me, said, "Mermer," and patted the tower so of course I climbed up there too because he wanted me to.
His grandfather and I will do almost anything he wants.
Unlike with all of the other grandchildren.
Hahahahahahahahahahahahahahahahahahaha!

We had such a good time with that child today. Jessie picked him a carrot and I washed it off and he tried a bite of it. 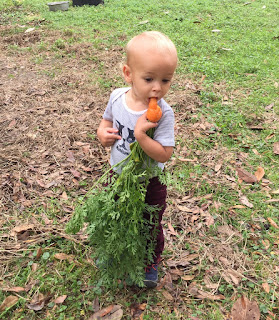 Mostly it got fed to the chickens next door who don't get much in the way of fresh vegetables or greens. We also fed them some arugula plants we pulled up and the goats got some too.

We read books in the library on the love couch. 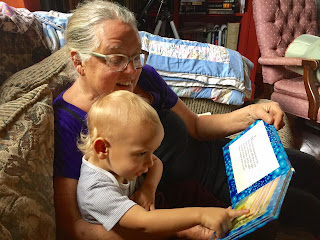 He rode the horse which he loved until he bumped his nose on the horse's neck during a particularly vigorous gallop. He loved it again later after he got over it. 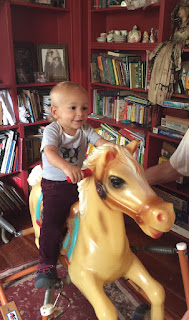 He played with his Boppy in the Glen Den with toys and he rode his little trike and we sat on the back steps and fed chickens. He can do a mean rooster imitation now. And chickens are still called "bawks."

He and his Mer danced to the Rolling Stones in the hallway. 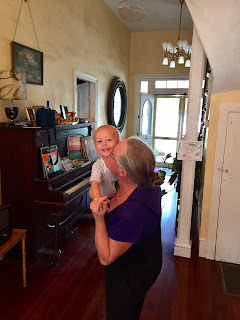 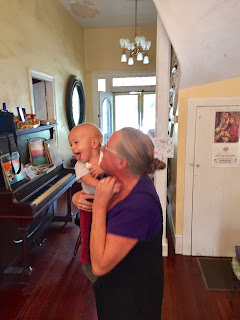 And he played piano, too.

So many things we did. But the cutest, cutest picture from the whole day is this one. 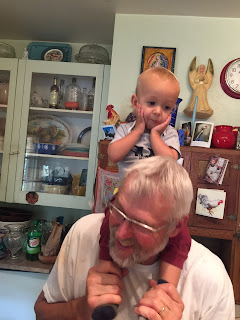 Or maybe it was this one. 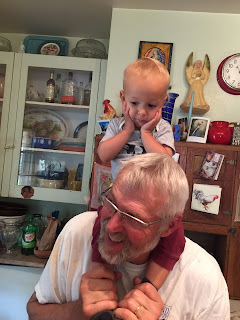 What the heck, August? Are you secretly studying cute baby poses online?

So it was a great day with the little boy and then of course Jack was miraculously found unharmed which made it an even greater day.

I swear to god, I have no idea how we could have managed not to hear that cat. I mean, our ceilings in that part of the house are really, really high but still. Both Mr. Moon and I did hear thumps which were weird sounding but we've heard weirder thumps in this old house before.
I know it's been over two weeks that he was up there because it was over two weeks ago when Mr. Moon closed the door. He can remember doing it- he'd gone upstairs to get a foam mat we keep up there to sleep on while he was working on the property in Apalachicola and that was definitely Friday night two weeks ago. How in the world did Jack survive up there? It certainly gives me a new perspective on worrying about leaving the cats alone for two days while we go off for a weekend.
He's been in and out of the house, had a little tuna treat and I don't know where he is now.
Not upstairs.
I cleaned the room in which he was imprisoned but we're going to have to throw the bed away. Seriously. I already threw the bedding away. Well, that's a lie. My husband threw it away, hauling it to the dump in his truck.

And to top everything off, the onions got planted this afternoon, although the potatoes did not. Mr. Moon got one entire pile of wood chips spread and it looks fabulous.

A busy, happy Sunday where I didn't have time to get the Sunday Blues.
Which is the best kind of Sunday.
Although I'm sort of looking forward to tomorrow so maybe I can get some rest.