And The Sunset Sure Is Pretty

Ay-yi. What a day.
I went to the dentist. I have bone loss (I guess) around a tooth and there's an infection in there and luckily it's a back molar and he says I can try to save the tooth (bone transplant was mentioned) or get it pulled and get an implant or just get it pulled now and leave that space blank or do some antibiotics and limp along with it and see how long we can keep it healthy enough to stay in my mouth.
I chose Option Four but if it continues to bother me, I'll just get it yanked.
Whatever.
Yet another glory of getting older and in the whole scheme of things, this ain't much.

So after the dentist I went by Publix to get my amoxicillin and because I was going to have to wait on my prescription, I decided to go to the Waffle House right down the road because I hadn't eaten before I went to the dentist and sometimes you just need some goddam hashbrowns and raisin toast. You know?
So two ladies that I know were in there, finishing up their breakfast and I ended up sitting with them and talking for about forty-five minutes and it was really sweet and fun and one of them bought my breakfast when I wasn't looking and I just felt like a queen.
But as I pulled back into the Publix parking lot, Lily, who had been at work right there at that Publix, called me and Owen was having a seizure at school.
Shit, shit, shit, shit.
It's been six weeks and a few days since his last one and that's a week longer than he's gone between them before and of course we were all just holding our breath. But Lily was on her way to the school as was Jason who'd been at home with Maggie, and I headed on over to their house to wait for them to bring our boy home although what I thought I was going to do is beyond me.
Be there.
Just be there.
This one didn't seem to last as long and by the time Lily got to the school, Owen was already present enough to ask if Gabe could still come over this weekend and when he got home, he seemed tip-top and if anything, hyper, unlike the last one he had where after it was over, he needed deep sleep for a little while.
I tried to get him to settle down and listen to some Harry Potter but he just couldn't concentrate. He talked about the seizure a little bit and absolutely understood he'd had one but he didn't remember it. Both times he's seized at school have happened when he was in the lunchroom and we're wondering if that's a trigger- the lighting, the noise, the smell?
Who knows?

After things settled down I came on home and decided to defrost my little dorm refrigerator that I keep my grains and beans in and I used the hair dryer and I chipped away and I worked on that sucker for an hour and was almost done when I punctured a freon line and so that's the end of the dorm refrigerator.
I should have just taken a damn nap and let it go.
But no. I was trying to be productive.
Ah-lah, let it be. Who cares? It was just a little old used dorm fridge and I don't even remember where it came from. The old barn, I think.

So that's the way it's been today and now I'm going to cook some supper and at least I got clean sheets on the bed and I do have a nice looking loaf of bread rising. 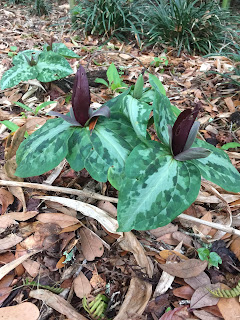 The trillium has come up without me even noticing and there you go- what else am I missing?
I'm certainly not missing the mosquitoes that are pestering me right now. I can't even imagine what they're going to be like by summer.

And so it's been a day of it-sure-could-have-been-worse but it hasn't been great.

And such is life so very often and on the whole, I am grateful for the part where it could have been worse and yet was not.