I was contemplating the missing Jack situation this morning and I thought, "Jesus, what if we accidentally locked him upstairs in one of those rooms?"
We almost never go up there.
Anyway, about that time Jessie and August got here and we made pancakes and ate them and fed arugula to the goats and climbed the tower and played all sorts of games and when Jessie was about to leave I told her about my thought from earlier. About the possibility of Jack being locked upstairs.
She said, "Want me to go look?"
"Would you please?" I asked her.
And so she did and a little while later she came back down the stairs.
With Jack trailing behind her looking absolutely none the worse for wear whatsoever. 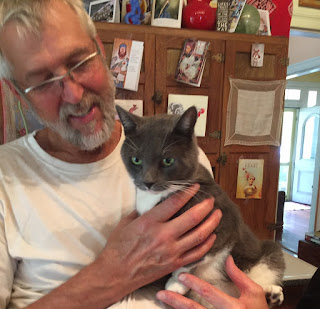 I guess he's been living off of random rodents and lizards up there. Jessie says it stinks.
I bet.
He went to the food and water and had a tiny taste of both and then trotted outside after we'd all hugged him.

Maurice is going to be so pissed you can't even believe it.

Anyway, there he is.