Some Of The Oldest Kinds Of Magic 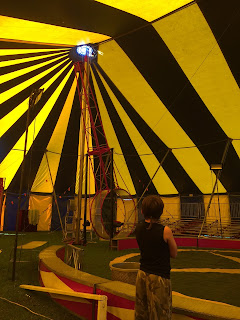 How often in life do we get to have an experience which is absolutely what we had envisioned, what we had hoped for?
Very rarely, I think. But tonight, well...we went to the circus and it was everything I would want in a circus.

Like I said this morning, the Zerbini Family Circus is a small operation. Everyone involved does everything, it seemed to me. The man who walked the boys around on the camel, so slowly, so patiently, 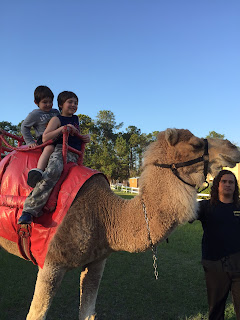 appeared in the Big Top just moments later wearing a spangly jacket. He was the ring master and animal trainer. I guess he could be called an animal trainer. He put the horses and camels through their paces. Those and the dogs were all the animals represented. And I loved the dogs. They were just a group of little mutts who did silly little tricks and got big applause because who doesn't love little mutts doing silly little tricks for an exotic woman with knee-high boots and eye lashes out to here?

There were beautiful ladies in sparse and sparkly costumes doing things high up in the air! 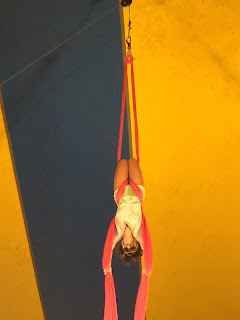 And babies trying to imitate them from the safety of their mama's laps. 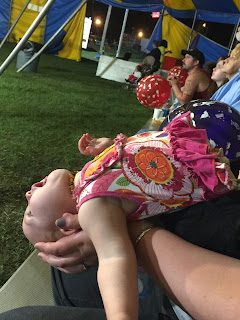 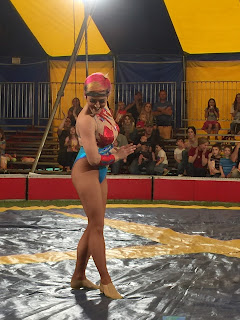 There were clowns who were not scary at all but who made us laugh so hard. I swear, the children absolutely were enthralled. Not just my grandchildren but ALL of the children. There were no screens, no TV's, no nothing but thrills and skills and grace and color and music. 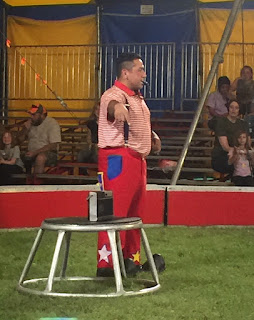 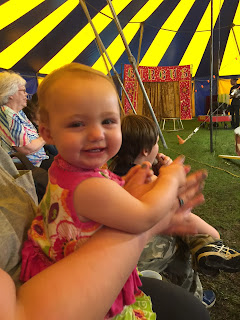 There were jugglers and acrobats, there were roustabouts who ran from one set-up to another, who handled the ropes that the acrobats performed from, dangling from the top of the tent. These men fascinated and amazed me as much or more than the performers and sometimes, they were working the ropes one minute and performing the next. There was a magic lady who could change her costume in a tenth of a second, hidden from view in a silken cover. She looked a lot like the dog handler. There was the smell of popcorn and of horse and camel poop. There was cotton candy and there were cheap toys and the lady clown involved Gibson in her act and he glowed with the joy of it.
It was hokey and wonderful and beautiful. 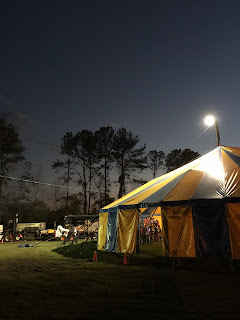 It was a little bit of genuine, exotic magic, right here in Lloyd, Florida with the pine trees in the background. And when the clown turned into the man on the death-defying wheel, I had to hold Owen's hand because I thought my heart could not take it. 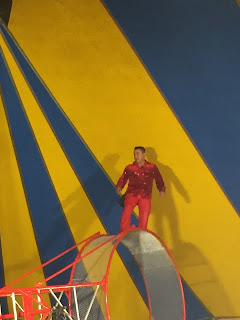 I don't think there will be any circuses around in a very short time. They are disappearing as we speak and, well, I don't know, but there was just something that felt so human and real about it all which is exactly what I had wanted to feel and it was there. Right there in the costumes and the muscular bodies and the gasps and the roaring of laughter and the clapping of hands and the smiles on the faces of the babies and the children and the mamas and the daddies and the old grandmas too. 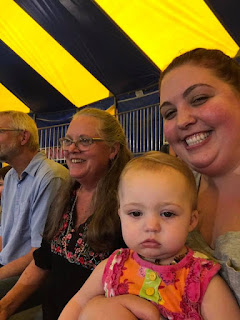 Think about it- think about the hundreds of years that little troupes of performers have traveled around, setting up tents and taking money for the pleasure and enjoyment of the people who stayed in one place, who so rarely got to see anything exotic or thrilling or magical or colorful. For whom church was probably the only real entertainment except for the village storyteller, the local musicians who played now and then at festivals or fairs.
How people must have craved this entertainment!
I think we probably still do although we don't realize it, our senses dulled by videos and movies with surround sound and every special effect they can cram into them, all of it sort of a faux excitement which you can be reminded of by the toys that come in Happy Meals at MacDonald's.

But tonight, we went to the circus. And Owen and Gibson will never forget that bumpy lap around the little field so high up in the air on the back of a camel. They will never forget the lady who wrapped herself in the velvet chiffons hanging from the top of the tent and then, let herself unroll in them so fast she was a blur until her feet touched the ground safely again. They will probably never forget the tiny dog who climbed the tall, tall ladder as quick as a minute and then who leapt into space to land in the arms of the pretty lady.

At least, I hope they never forget.