Reaching So Far Down Into The Bucket Of Memories

When the bug man came a few months ago to inspect for damage in this old house, he did find two pieces of furniture out in my office which had some sort of wood-boring pests in them and he said we either need to get them treated (which involves taking them to a facility where they do this) or burning them.

One of the pieces of furniture is my grandmother's desk which, at one time, was a beautiful thing. But the wood veneer has started to peel off of it and it's sort of a wound in my soul because my mother was so mad at me for "letting it go." And I suppose I could get it all fixed up and treated and maybe I will but the other piece is just a large bookcase which I'm sure isn't worth the expense.

But I've put off clearing those two pieces of furniture because both of them were where I stashed things like pictures and cards and letters. Also, several of the versions of my novel, printed out and boxed, along with the correspondence from the literary agent who took my novel on and promised to sell it. Oh! The interest she reported from different publishing houses was so very, very exciting.
Until...well, nothing happened.
And I'm sure I've said this before but I never really allowed myself to believe that the book would be published as a way to protect my heart and so, it wasn't really that big of a deal but of course it was, in a way.

So today was weird and sort of hard. I went through so many things that my children have given me over the years. The first childish scrawls on Mother's Day, the pictures of flowers as big as the humans, stickfigured in crayon on construction paper. The many, many letters May has sent me over the years. I was actually amazed at how many letters she sent me while she was in college in Sarasota and when she traveled the country in her truck and when she lived in Phoenix and in Connecticut and I didn't even stop to start reading them because I never, ever would have come up for air.
Letters from camp. I think Hank was the only kid of mine who liked camp. The rest of them sort of hated it. May flat-out said she hated it. And all of them complained of the heat.
The books my kids made me with pictures and illustrations.
The poems they wrote me. The sweet cards and letters my husband has sent me over the years. So much, so much and it's all like a time machine and then the pictures, too, the photos of my babies when they were babies and when they were toddlers and I can barely stand to look at them because so much time has passed while I blinked an eye, did a load of laundry, took a breath, a nap, a shower.

And my journals! Jesus Christ! I never really thought of myself as someone who keeps a journal and yet, I truly have. Or used to, at least. Journals bitching about young motherhood and on the next page, how heavenly sweet it could be and how tired I always was and the entries I wrote from Cozumel- so many from Cozumel- and I even found the pictures from our first trip there, thirty years ago.

What to keep? What to toss? What to do? Do I ever want to go back and read those journals? I doubt it. Do I want my kids to read them? After I'm dead they can if they want to. I'll be dead. I won't care. But do they really need to know all that shit? The ratio of profound to deadly boring daily stuff is not balanced so that they would really learn anything from reading them.
But I kept most of them. Put them up on a high shelf in the library where they will sit and probably rot, eventually.

I threw away so much stuff. Cardboard boxes of different versions of that long manuscript. Photos that were blurry or stupid or of subjects that no one on this earth cares about. Four turtles on a log? Throw it away. I threw away stuff that was mouse-tattered and stuff that had been rendered unreadable by mildew and moisture. I threw away stuff that I'm sure people could have used and now I'm wondering why but it's too late, I did it, it's all at the trash depot.

And my office is rather a mess but I got to a point where I just couldn't do any more. I need to organize the stuff I've kept, or at least make a stab at that.

Here are some pictures. Some of pictures. 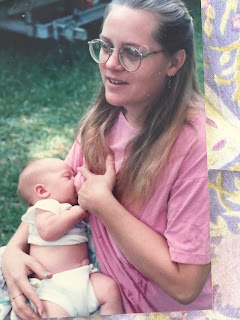 Me nursing baby Jessie. I was thirty-four. I felt so old. 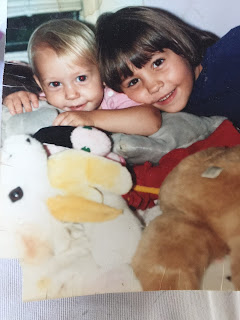 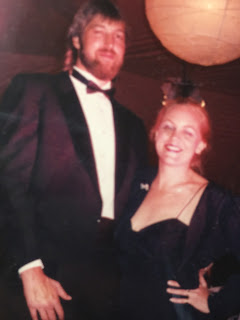 Us at a wedding. I don't remember when it was but I remember I bought that dress at JC Penny's. 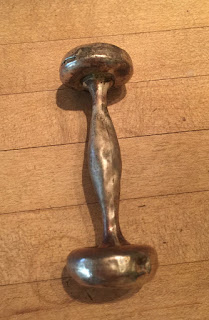 My silver baby rattle which was in Granny's desk. I think that my brother Russell repaired it for me when he was working as a jeweler and warned me that it wasn't really strong enough for a baby to gnaw on and play with. But it's as familiar to me as my thumb. 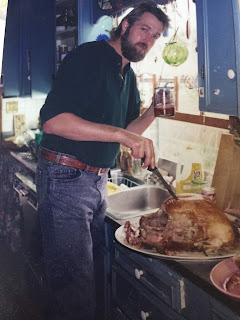 The incredible hotness that is my husband, carving a Thanksgiving turkey. 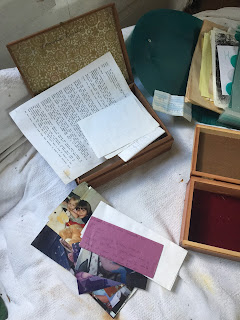 So that's been most of my day after Lon and Lis left this morning and may I mention that we stayed up until 1:30 in the morning? Dear god, I am tired, but it's okay. It was lovely, spending the morning with them, eating heated-up quiche and toast, looking at house plans and the garden.

Mr. Moon spent most of the day spreading wood chip mulch and now I'm going to make us a gourmet supper of tuna casserole and salad. We still have enough salad greens to make a fine salad and as the season comes to a close and everything begins to bolt, we appreciate each and every one. 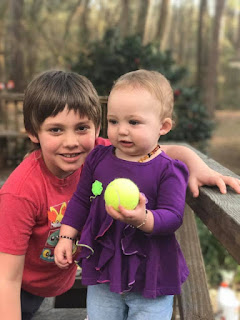 There. That's the sort of picture I need. Not my past with all of its ghosts and memories, but my now.