Feelings. Nothing More Than Feelings 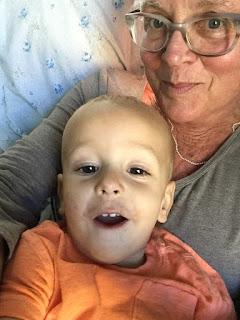 Tiny boy is getting so good at words and is getting so long in the legs. He did not fuss for his Mer for one second. Not one fuss did he utter, not even when I wouldn't take him for a bike ride or a walk. He brought me his jacket and he wanted his bike helmet and I did put the helmet on him and he said, "Me!" and pointed to the bike and then he took his jacket and tried to put it on himself and went over to the stroller and again said, "Me," and I told him that we were not doing either, I was so sorry, do you want to go read some more books?

We did go outside and he tried to catch the kitty cat but he could not and then he tried to start the mower and he couldn't do that either but that was okay because he supplied the engine sound himself. He took me to the refrigerator and patted it so I opened it up and he indicated that he wanted a string cheese. I got the little package out and opened it up and gave him a small piece but no, he wanted the entire thing so I gave it to him and then he proceeded to hand the whole piece of cheese to Greta the dog and the act seemed to positively reek of practice and ritual. I asked Jessie about it when she got home and she said that yes, that's what he always does if you give him string cheese.
We probably read at least twenty books. He loves books and he loves to sit in my lap while I read to him so you know, that's pretty much heaven. I feel quite caught up on my farm animals, pets, forest animals, animals that like the water, and slithering and crawling animals now. Also my numbers from one to ten.
Not to mention my body parts.
So that was about the best time I could have had this afternoon and when his mama got home he was happy but he didn't go through any of that nonsense about crying, pretending he'd been bereft the entire time she'd been gone. He just settled into some nursies and I think he feels as comfortable with me as he does an old shoe.
He kissed me good-bye and I came home and did some chores around here. The hens have fresh hay, the mud room and Mr. Moon's bathroom are freshly swept and mopped and smell of white vinegar and Fabuloso instead of the cat piss they did smell of. Bread is rising. Salad greens are picked.

For those of you who asked- NO! I have not seen Jack in over a week and I just talked to my next-door neighbor and she hasn't seen hide nor hair of him either. She's asked the neighbors on the other side of her if they've seen him and they have not. It's very upsetting because this is not typical Jack behavior and I've had to chase that gray and white feral off the back porch about three times today already. My neighbor and I agreed that if we could get rid of the feral, Jack might come back. Neither one of us thinks he's dead because he was so healthy and we haven't smelled anything nor have we seen vultures.
This is the way it is in the country.

And this is the way it's been in Lloyd today. My row of new greens is coming up and I have the water on them and the shallots I planted are sprouting as well. The mulberry is putting out leaves and blossoms. 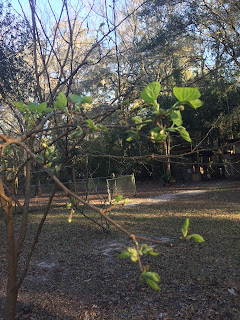 And I took this picture of Miss Trixie, our oldest hen and Mick's favorite sister-wife this afternoon because the light made the blue in her feathers come out. 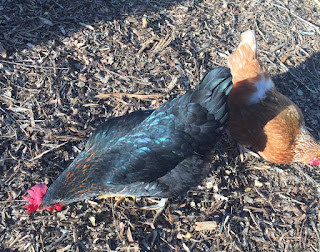 That's Miss Butterscotch behind her. That old lady gave me another perfect egg today.

My soul has been in unrest today but I have done everything in my power to soothe it with exercise, with talk, with being outside, with loving on my grandson, with pounding bread dough, with being useful and minimally productive.
Not to mention with medications.

Well, some days are like this. And if you remove my emotions from the equation, it's been a practically perfect day.

I'll go with that.