In some ways, today was a great day and I have the pictures to prove it.
Grandkids make days great. They just do. They offer love on the purest, simplest level, and besides that, they're funny as hell.
I went and stayed with August for a little while this morning so that Jessie could go to the doctor and she told me that when they were still in bed this morning she told him that Mer was coming to see him today and that he crawled right out of the bed and ran to the living room to see if I was there yet.
That little goofball loves his Mer and I know it's only because I love him so much and yes, even babies know that sort of love and appreciate it and bask in it.
Lily brought Maggie over too, while Jessie was gone and the babies tried to play and they listened to some books and Maggie loves her Mer too for the same reason August does.
She knows already and with all of her heart that she's got me wrapped up around that teensie little finger of hers.
Then Jessie got home and we went and sated our deep need for the food at Persis Indian Grill. How we love that joint! And at the end of the meal, the handsome server brought each of the children a lolly pop.
Now, August being an only and first child has never had a lolly pop.
Up until today, that is. 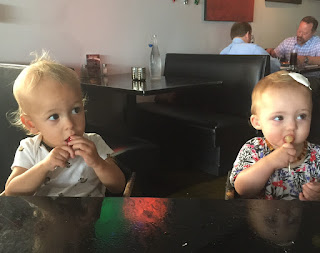 He cautiously checked it out and he decided that he liked it. 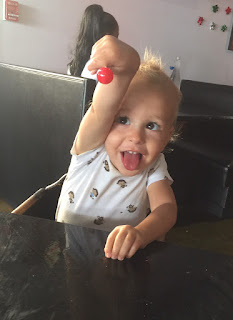 Jessie and August went on home and Lily and I went to Costco for some things she needed and then Lily picked up Gibson from his cousin Lenore's and I came home.

I'm having a huge amount of anxiety. Like- well, I'm swimming/drowning in it. Even with the medication. Part of it is that I have a little problem (I hope it's little) that I need to go see the dentist about and I'm hoping beyond measure that it's not another damn abscess because the last time I had one it cost about a million dollars and it took months and months to complete the process of treatment and I really just don't think I can go through that again.
And of course, if I have to I will and of course, no matter what it is, I'll deal with it, and I'm just such a goddam baby and what in hell happened to me in a medical office to make me this absolutely insane about anyone wearing a white coat?
I have no idea.

But. This happened tonight, too. 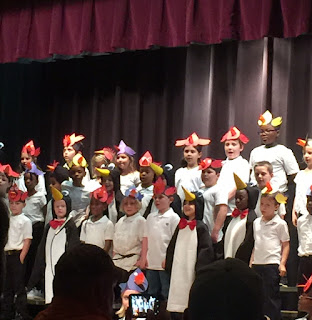 Owen's choral performance and it was darling and although he did not sing one word, he did have a small speaking part which he performed quite well.
And then, when we were leaving, 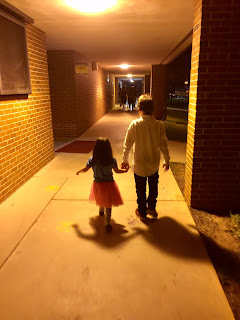 all of his own accord, he took the hand of his cousin, the darling Lenore, and walked her out to the parking lot.

This may be one of my favorite pictures ever in this world.
My good, good boy. My Owen.