Riding Alligators And So Very Much More 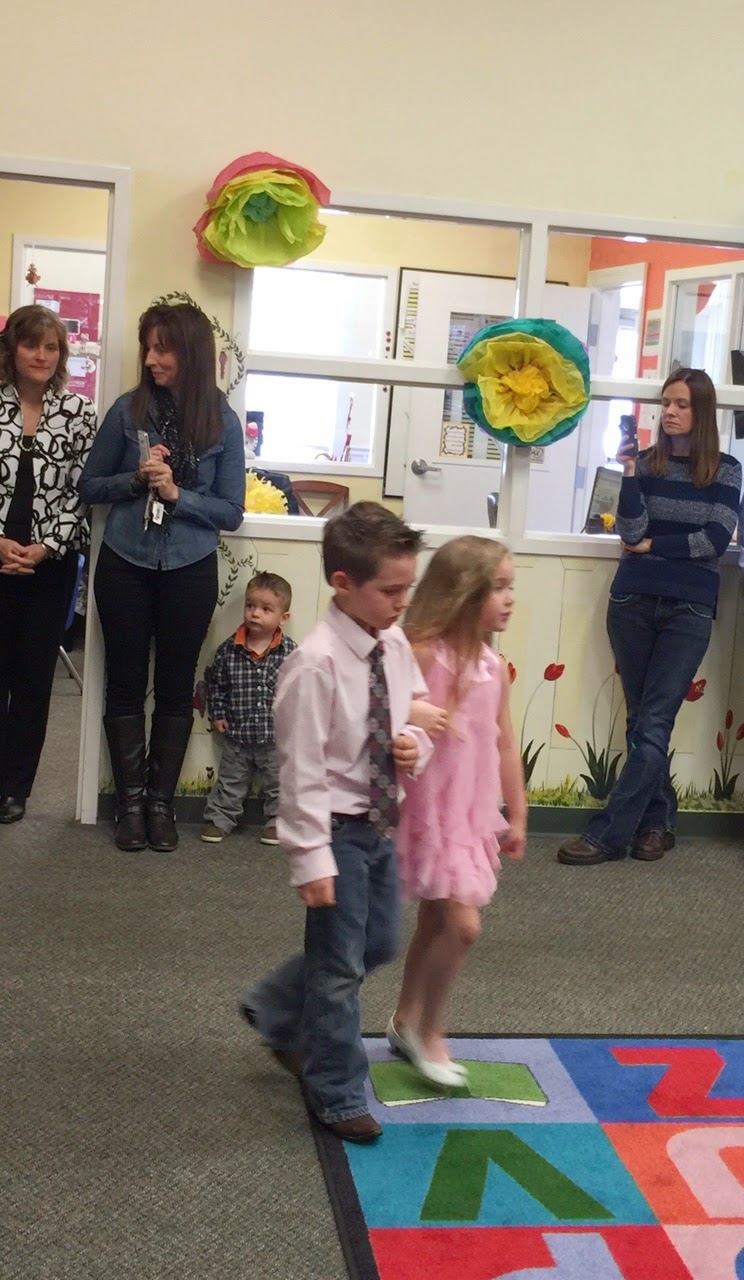 It's been some day. It's had its up and its downs. Boppy and Lily and Gibson and I went to Owen's school for the Fairy Tale Ball. I dressed up! Okay, I put on make-up. And a bra-like garment under my dress. Shall I tell you about how my slip almost fell off now or later? Okay, now. It is old. The elastic suddenly lost its grip and I noticed that it was hanging about eight inches below my dress.
Ah well. At least they were both black. Who cares?

Owen did NOT enjoy the ball. In fact, I doubt he will ever truly get over the trauma of it. He absolutely hates people watching him do things that he does not feel comfortable doing. Especially people he does not know and there were a lot of people. You can see by the expression on his face in that picture that if, given a choice, he would probably have chosen to have his face drenched in ashes water again rather than participate in the Fairy Tale Ball.
He did dance although, well...here you go. He's the one with his back to the camera at the very beginning.

But hey! At least he wasn't the poor boy who, as soon as he took his position with his princess, immediately needed to barf. Nope. Owen did not barf. He did not cry. He did what he was supposed to for three songs but his face was a rictus of agony the entire time. I wanted to grab him and run away with him. And bring him home to dance to the Rolling Stones in the hallway where we could twirl and whirl with no one watching at all.
When it was over the children were invited to dance with a parent and Owen ran to his mama and she held him and he cried and cried. I told him that he had been the bravest one because he had been afraid and done it anyway. And that I was so proud of him. We all were. And we told him over and over.

By the time the juice and cookies part of the event was over, he was pretty much okay and we let him choose where to go to lunch and as you can imagine, we ended up at Japanica! for more miso soup and sushi and so forth. He was in a good humor by then but refused to discuss any part of the Fairy Tale Ball.

Right before we got to lunch, I talked to Hank and he told me that a woman we know, a very good friend of his for over twenty years and someone I have felt a connection with for almost as long, killed herself on Wednesday night.
Such shock. Such sadness.
No one seems to know any details and really- none of it matters now. She had to have been in unbearable pain. She left five children. Our community is stunned. How could we not have known she was so close to the edge? Well, we didn't. And she had moved to a town south of here and so she was not surrounded by her community. Not in the real world way.
There are no answers to something like this. None. We can only grieve and reach out to each other.
It's not enough. But it has to be.
She was unique, that one. I'll tell you that. She was like no other.

And then of course Leonard Nimoy died and he was not part of our community but he was part of the universal consciousness, wasn't he? A different sort of sadness, but still.
And I found out that a woman whom I have admired for many years, Eugenie Clark, also died. She was a marine biologist who loved sharks and I'll never forget a show on TV I saw about her years and years ago and she was diving with an absolutely immense whale shark to such a depth that when she came up, she said that she had had to force herself to leave the shark and surface because she knew she was reaching that point of euphoria caused by nitrogen narcosis. She was so beautiful, so amazing. She was ninety-two when she died. Leonard Nimoy was eighty-three.
I'm not sure how old Megan was. Way too young, I'll tell you that.

Nimoy was famous for playing Spock who adventured into deep space.
Clark was famous for adventuring into the deep seas.
Megan was not famous. She adventured right here on earth in ways that I can't even begin to describe. She was one of the bravest people I ever personally knew.

Well. We are still here now and despite all, I had a good day with my boys and their mama and we even went by to see Hank and take him lunch from Japanica! Here is his cat, Humbert, on his leash. 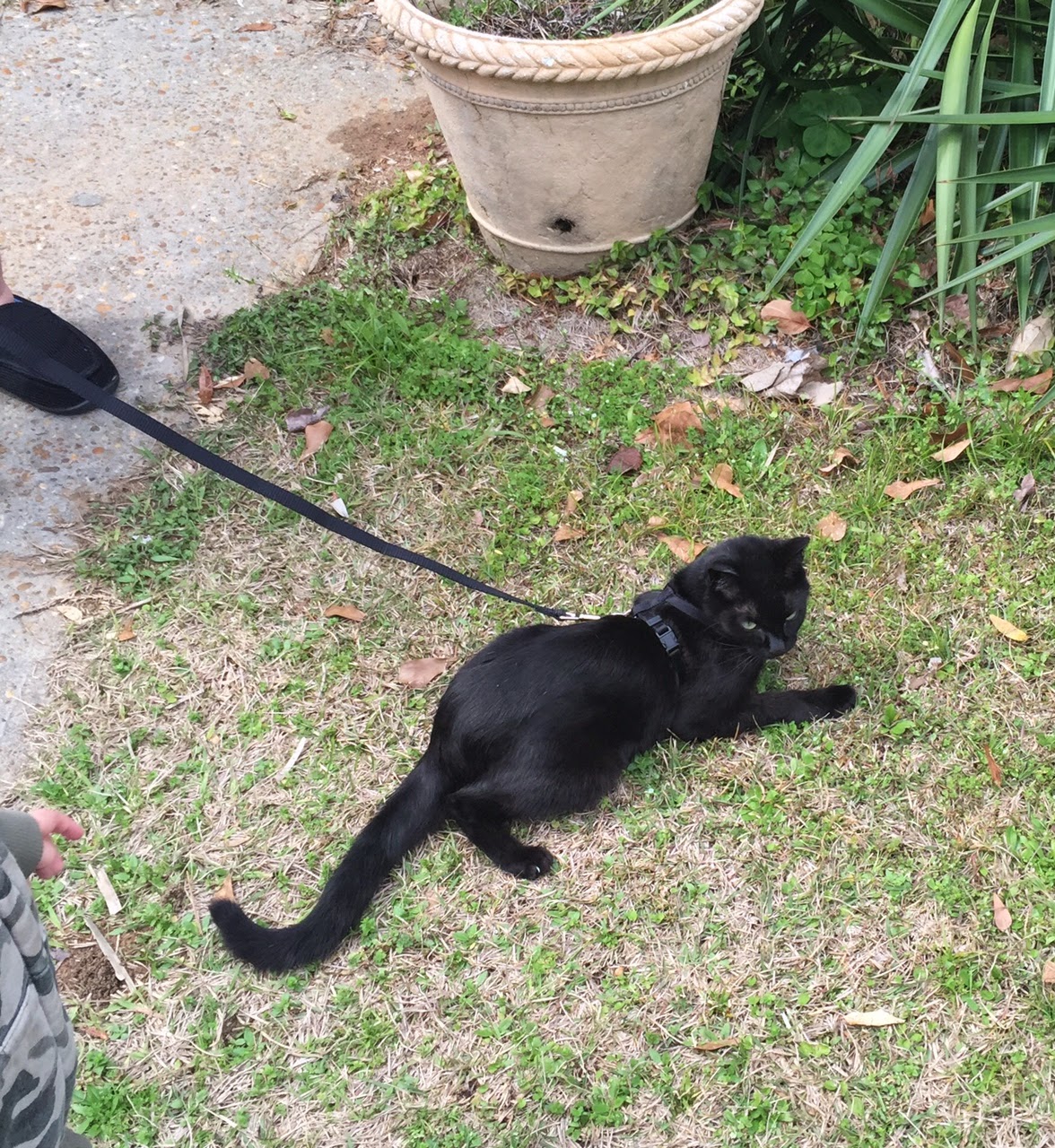 Yes. Humbert goes outside with a leash. Humbert is a very special cat. He may be the most be-here-now of all creatures on earth. And he is so lucky to have Hank and Hank is lucky to have him.

And we went to the library where Gibson cried and cried to ride on the alligator.
Which, of course, means elevator.
He got to ride on TWO alligators.
And Owen hugged me so tightly and so long that I cried a little bit, feeling as if I have never in my life been loved quite like I am loved by that child.

Life is fucking short, y'all. Even if you live to be 93. Some of us live long and prosper. Some of us dive with sharks and experience that sort of euphoria. Some of us do the best we fucking can until we can't. So let's ride all the alligators we can while we're here. Let's love with as much of our hearts as is humanly possible and show it in every way we can.
Let us please reach out for help before the pain gets so bad we cannot.
Let us be brave enough to dance.