Mr. Moon and I worked our damn asses off today. I really didn't get that much done in the garden yesterday and took a long nap instead but today was a different matter entirely.
After Lily and her babies went home, the yard work began. My husband has whittled the two giant piles of wood chip mulch down to one, much reduced in size, and spent some time spreading more of that about. It's like his new hobby. And it drives him INSANE that the chickens scratch in it and create what he calls potholes because he practically lays it down chip by chip, evenly and artistically and perfectly and then the hens come along and just scratch about in it with their scratchy determination and I think he's ready to shoot every one of them.
Not really.
Well. Sort of.

Anyway, yesterday he got out the what-do-you-call it, the leaf blower, yeah, that's it, and blew oak leaves into nice tidy piles and today I went out with a rake and the yard cart and a sheet and raked and loaded the cart with leaves over and over and over again and deposited them on the garden until I thought I'd just fall over but GODDAM IT! THAT ENTIRE GARDEN IS MULCHED!
Lord, y'all.
I sure feel good about that.

I'm ant-bit, mosquito-bit, and every muscle in my body hurts and although I've taken a shower I'm probably still half filthy but my garden looks beautiful.

And Mr. Moon transplanted a tea olive that's needed moving and done all sorts of other outside chores and I think we shall sleep the sleep of the exhausted and the just tonight.

But first, I have to make supper.

It's not very often but now and then I wish Lloyd had pizza delivery.
Tonight is one of those nights.

Here's one more picture of Maggie that I took today because she's just so darn precious. 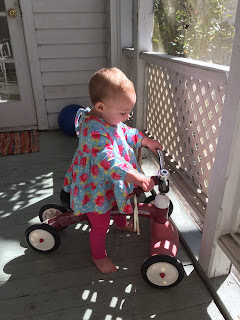 And that is that and that's enough and that is the way it is. At least in Lloyd, Florida on this Sunday evening.