Let There Be Love 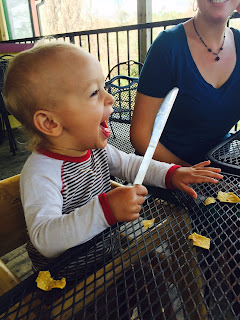 So. Did you ever take a knife to tortilla chips and smash them?
Because obviously, it's one of the most hysterical and fun things to do in the entire world.
Oh, that boy.
Besides smashing tortilla chips he also delicately dipped them into salsa and handed them around the table. He's a helpful guy.

We started out today with Hank and his friend Rachel, and Lily and Gibson and Maggie and Jessie and August and me but just about the time we sat down, Lily got a call from Owen's school. He said he was feeling confused and so Lily took off with Maggie and left Gibson in our charge to go and get the boy. He turned out to be fine and whether his new medication made him feel weird or whether he's processing everything that happened yesterday or whether he truly felt he was confused or whether he was trying out the theory that if he says he feels confused (which is what the doctor told him might be one of the signs he's about to have a seizure) and reports it, someone will come and get him from school- it doesn't matter.
He did what he was supposed to do and he got picked up from school.
When Lily called to tell me that he was okay, I could tell from her voice that she was upset and of course she was. The worry is unavoidable. And this is all a process which is also unavoidable. All of the parts of it, from the physical to the psychological.

But anyway, the rest of us stayed and ordered our lunches and we had a good time talking and chatting as we do and the restaurant knows us so well that our server brought us EACH a bowl of salsa and I am not ashamed to admit that more bowls were needed before the end of the meal.
We are a salsa-loving group. 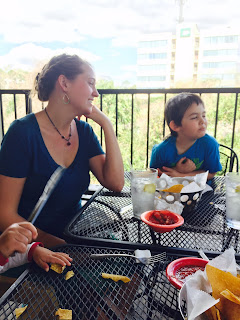 After lunch, we said our usual good-byes in the parking lot with kisses and hugs and Hank Held A Baby. 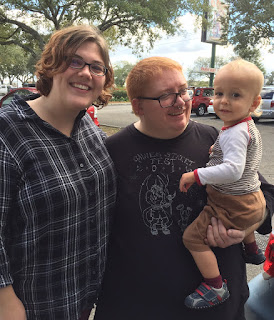 That's Rachel and we all liked her very, very much. 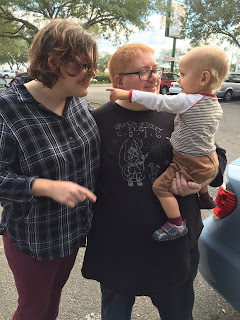 On the way back to his house, I asked Gibson what he'd done with cousin Lenore while we were gone.
"Played," he said.
"I missed you very much when we were in Jacksonville," I told him.
"I didn't know that!" he said. And then he said, "I missed you too!"

It's so odd how my heart just bursts with love for each of these grandchildren. I don't know why, but on that drive I could hardly stand how much I was loving Gibson. In some ways, he is absolutely the definition of the middle child with Owen as a big brother and now Maggie as the baby sister. And yet, he is so very, very Gibson in all ways. He is his own man, his own self, with his own energy and outlook on life and unique sense of humor and intelligence and way of walking on this earth.
And I cherish that child.

I hung out for awhile when I got to Lily's and Owen was glad to see me. He called out to me several times when I was in another room, just to see if I was still there.
"Owen," I said. "Have I ever left without telling you good-bye?"
"No," he admitted. "But it could happen some day."
"You're right," I said. "It is a possibility."
And my heart cracked in two.

I played with Maggie in her room. She was in a very merry mood. 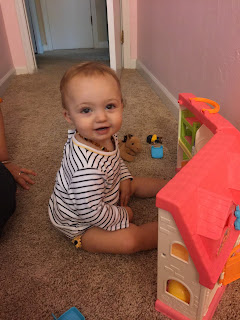 She was playing with her little dollhouse, putting the girl figure in all of the rooms of the house and laying her in bed. My granddaughter cracks me up so much with her talking. She absolutely has her own language and she asks questions and makes statements and except for the facts that the words are not understandable to us, she sounds exactly like anyone having a conversation. So serious, so certain that she is talking just like the rest of us.
And she is.

Lily and the boys and Maggie and I all sat on the floor of Maggie's room and the children crawled all over their mama and Maggie hugged her hard and Gibson announced, "Cuddle puddle!" and I joined them and said, "Hug heap!" and it sounds so corny but it was so sweet.
I know that this has to be one of the hardest times of Lily and Jason's lives. Three young children, each with his or her own needs, some of them proving to be special, to say the least. The diapers, the food, the bills, the house, the yard, the doctor appointments, the medications, the laundry, the jobs- it's an almost insurmountable amount of work and worry.
And yet, there is this love, this joyous and absolutely undeniable love which spills out and spills over in moments of pure, sheer happiness.
I think that all good parents feel as if they are never quite doing enough and of course, the tasks of a parent are never done.
Never, ever.
But if the love is there, if the true caring is there, if the obvious moments of joy are there, then all will be well.

There have been so many times in my life when I've felt completely inadequate to the task of being a mother, a wife. Hell, even inadequate to the task of being a normal human being. And then, days like today happen and I see that despite my vast faults and inadequacies, I've managed to let the ones I love know that they are loved and now that love has been passed down and is shown and shared anew.

And it's okay. It's far more than okay. I've done my job.