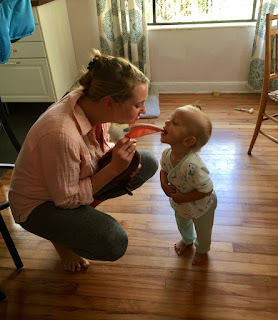 When we went to Jacksonville and visited the museum, it was a free entrance day and so I made up for it in the gift shop, buying Owen his possum and Maggie a stuffed owl and Gibson a stuffed manatee and August a stuffed pelican.
This is what he did when he met it today.

Do not ask me why.

I spent the entire day in town, most of it with Jessie and August which was very nice. It's lovely to be able to give one-on-one attention to each grandchild. When we had finished our errands we came back to Jessie's house and she looked at my car, parked on the street and said, "Mama, you have a flat tire!"
Well, dang.
So of course I called my husband because that is the way we do it. I deal with dinner, he deals with tires. He was at lunch though, and so I hung out with Jessie and August. We had fun. August is growing up too fast. He knows a lot of his animals and the sounds they make and he knows that sticks are meant to play with and he loves to tease Greta Dog by holding her ball and pretending he's going to throw it and helping his mother with the earthworm bin, and he loves avocado and tuna and shoes and books. Especially books. 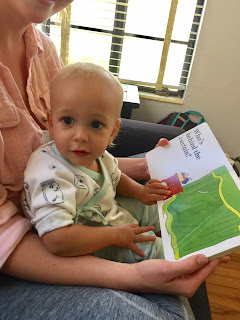 He also very much enjoys waving at people both hello and good-bye. He can say "thank-you" and does so, appropriately. He'd rather climb than almost anything. And when Mr. Moon got to the house, he started waving his arms up and down and saying, "Boppa! Boppa!" And smiled so big.

You can only imagine how happy that made his grandfather.

Turns out I had a nail in my tire.
Sigh.
But there was enough air in it to drive to the nearby tire store where they know Mr. Moon quite well and they fixed it all up and then I went to Costco and the library and Publix where I got to see Lily and give her the pajamas that I bought for her kids today at TJ Maxx. Owen puts his PJ's on as soon as he gets home. As Lily says, "He is serious about his leisurewear."
One time when I took him home, he changed into his pajamas in the living room and told me that he likes to keep them there because that way he doesn't have to go all the way to his room to change.

So now I'm home and my entire house smells of cat piss and WHAT THE FUCK IS GOING ON? Is Maurice telling Jack that he better not come back? Is that stray cat coming in the house and pissing all over? Is Jack sneaking back in and telling Maurice to fuck off?
I don't know but I don't like this.
Yesterday I washed all the rugs in my bathroom and mopped the floor with Fabuloso and white vinegar and it smelled so lovely and then I forgot to close that door when I left for town.
Fuck me and fuck it.
We're leaving tomorrow for a weekend in Apalachicola and I'll deal with it all when I get home on Sunday.

When I'm stronger. (She said in her best Scarlett O'Hara voice, the back of her hand to her forehead.)

Our friend, Spencer Bohren is going to be playing at the Dixie Theater in Apalach on Saturday night and his wife, my dear friend Marilyn, is going to be with him so we're using that as a good excuse to take a weekend off together. I've been informed that there's a few hours of work to be done on the property that Mr. Moon did not get finished last weekend. He told me this and said that it could all probably be done in about two hours before we check in to the place we're staying.
"That's fine," I said. "And what will I be doing while you're hauling palm fronds?"
"I thought you might help me," he said.
"Mmmm...," I said. And was silent for a little while.
"I suppose I could," I finally said with a weary sigh.

A woman's work is never done.
I'll wear my overalls.

A gray and white cat just walked in through the cat door onto the porch.
"Jack's back!" I announced to my husband.
And then the cat left again. I swear to god. I think it's that feral.

You do know that all of this silly cat worry is a distraction to stop me from worrying about WW III, right?

Fuck me. Fuck it.

Bite a bird. Kiss a baby. Heat up the soup. Go make up the bed.

Love the ones you're with. Intensely and with all the passion in your soul. Beyond than that, I have no good advice.