Someone's Going To Be Cleaning Up The Stove Tonight 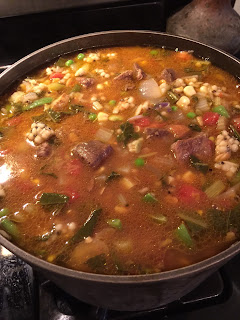 Whoops, I did it again and by "it" I mean I filled up a soup pot to the point where if it barely simmers it's going to spill over and why do I do this? I do not know but I do. Yes, I have a bigger pot but this one is more than adequate to hold soup for two, even if they want to eat it for days, or possibly weeks.

Well, la-di-dah and I really don't care. I've been in a mood lately where nothing is making me care very much one way or another. In the popular vernacular, I suppose we could say that I have no more fucks to give, or as A.P. Whaley, the sea captain used to say, "My give-a-damn-meter is at zero."

Whatever.
Here's a picture of some folks I do care about. 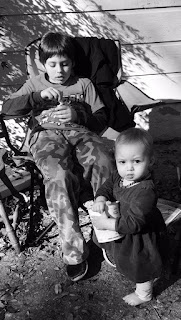 Why the black and white? I do not know. I was just fooling around with the iPhotos stuff and set it there and was too lazy to change it. It does make Maggie look like a baby from long, long ago which I like. I did a little more babysitting today and did the Owen bus pick-up and then he read me a book and his reading is really getting fine. He is doing very well these days and is living his life fully with the few restrictions given to him by the neurologist. He is on the medication she prescribed with barely any side-effects and has not had a seizure in almost six weeks but let's not talk about that because I am superstitious, as are we all, most likely. He has a speaking part in a play coming up at his school and he read me his lines today and asked if I would be coming to see him.
"Of course!" I said. And of course I will, good Lord willing and the creek don't rise.

I could talk about the snake pit the White House has become but I don't want to.

I do want to mention that Mr. Moon spent hours and hours today planting potatoes and then mulching them with so many leaves that they are as cozy as a bunting-wrapped baby. He does everything with so much more care and mindfulness than I do and that's just a fact. My garden rows are slapdash and wandering, his are straight as can be with whatever he is planting set with accurate precision as to depth and spacing.
I respect his methods and I respect his work but that's never going to be how I do it. It's not how I garden, it's not how I cook.
Somehow, it all works out and we both know that by now.

All right. That's all I have to say. My give-a-damn-meter has fallen below zero and if there were any way in this world to just go to bed now and still keep whatever shred of dignity and pride I may still have, I would do it but I can't and so I suppose I'll have to spend at least the next three or four hours in a state of consciousness.

Or a reasonable facsimile thereof.